Dan Ticktum cruised to his second Formula 2 victory of 2020 in the sprint race at Monza, as Callum Ilott finished second to return to the top of the standings.

Having lined up second on the grid courtesy of a seventh-place finish in Saturday's feature race, Ticktum made a brilliant start to clear polesitter Louis Deletraz on the entry to the first chicane.

After taking the lead, Ticktum slowly but steadily built a gap over his rivals, moving two seconds clear Deletraz by lap 10 of 21.

Deletraz then fell into the clutches of Virtuosi's Callum Ilott and the ART of Christian Lundgaard, the duo clearing the Charouz two laps from each other to demote him outside the podium positions.

Ilott and Lundgaard, however, could do little about Ticktum after passing Deletraz, the ex-Red Bull junior expanding his lead to the best part of three seconds.

When MP Motorsport's Felipe Drugovich stopped at the exit of the first chicane after being pitched into a spin by Williams Formula 1 test driver Roy Nissany, there was a risk that his advantage could be evaporated by the safety car.

However, the race control chose to deploy only a virtual safety car instead, allowing Ticktum to retain the lead which he held until the chequered flag was dropped at the end of lap 21. 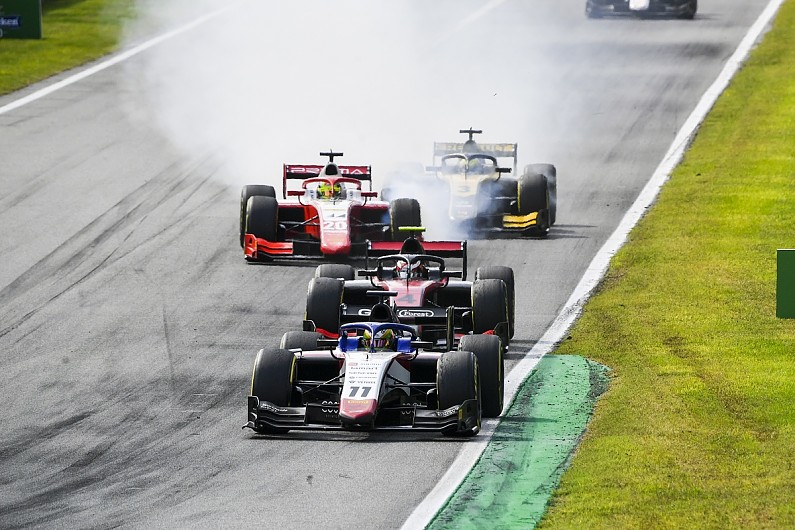 Ilott held on to second, despite Lundgaard closing within half a second of him on the final lap of the race.

Saturday race winner Mick Schumacher jumped up to fourth early on, but locked up heading into the first chicane while defending against Guanyu Zhou, dropping to sixth.

However, he managed to recover the lost positions, overtaking Deletraz two laps from the finish to finish as the top Prema driver in fourth.

Deletraz eventually finished fifth after successfully fending off the second Prema of Robert Shwartzman on the final tour.

Carlin driver Jehan Daruvala finished in the points for the second race in a row in seventh, ahead of the Campos of Jack Aitken, who completed the points scorers.

Red Bull/Honda protege Yuki Tsunoda and Zhou retired from the race due to unrelated technical problems, joining Drugovich in the list of retirees.