Felipe Drugovich dominated proceedings in the FIA Formula 2 sprint race at Barcelona to earn his second reversed-grid race victory of the season.

Drugovich was left frustrated following Saturday's feature race, believing he deserved to win the event in which his MP Motorsport team-mate Nobuharu Matsushita scored victory having started only 18th.

The Brazilian driver bounced back at the start of the sprint race by taking the lead on the run to Turn 1 from series veteran Luca Ghiotto, who made a slow getaway from pole position.

FIA F2 rookie Drugovich immediately built an advantage of two seconds over Ghiotto on the opening lap and this gap continued to swell as the race progressed.

Drugovich handed MP its second successive race victory with a winning margin of almost 10s over Ghiotto, who picks up his first podium since winning the Hungarian sprint race.

Mick Schumacher attempted to wrestle second place from Ghiotto at Turn 1 on the first lap, but the pair touched wheels and a sheepish Schumacher was passed around the outside of Turn 1 by fellow Ferrari junior Callum Ilott.

Championship leader Ilott pressured Ghiotto for the Hitech Grand Prix driver's second spot, but a failed overtaking attempt at Turn 1 just past half-distance was the closest he came.

Virtuosi's Ilott was instead forced to defend the final place on the podium from Schumacher as his tyres faded. 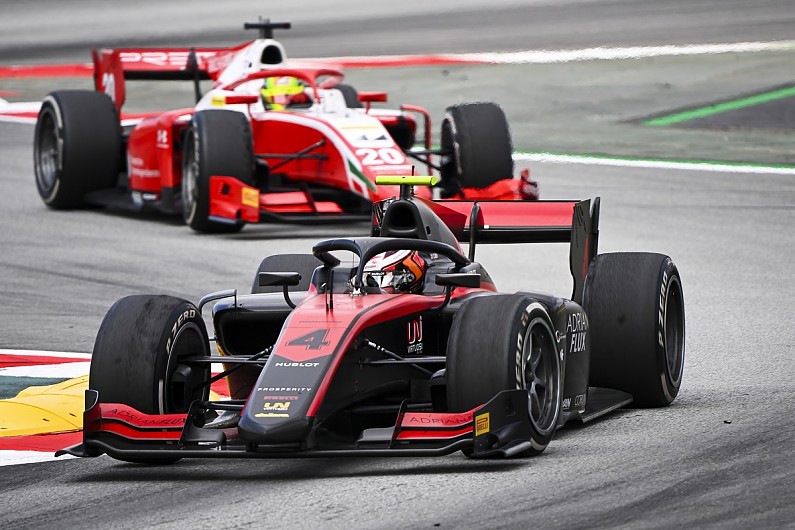 Schumacher eased past the ailing Ilott at Turn 1 with just over five laps to go and Yuki Tsunoda followed Schumacher through at Turn 4 later in the lap.

Prema Racing driver Schumacher earned his fourth podium of the season in third, with Tsunoda finishing in fourth place for the second time this weekend.

Charouz Racing System's Pedro Piquet claimed his first points finish of the season in seventh place, having charged from 14th on the grid.

ART Grand Prix pilot Christian Lundgaard barged past Ilott in the final sector on the last lap to nick the final point and demote Ilott to ninth at the chequered flag.

However, Ilott reclaimed this final point after the race when Lundgaard was issued with a five-second penalty for leaving the track while overtaking Ilott.

Reigning FIA Formula 3 champion Robert Shwartzman was another to struggle with his tyres and was forced to make a second pitstop that left him down in 13th place at the end of the race.

Ilott's team-mate Guanyu Zhou also made an unscheduled pitstop after a huge lock-up at Turn 1 as he defended from Mazepin late in the race. He ended up in 14th.