Hamilton qualified second-fastest at the Red Bull Ring but was hit with a three-place penalty for impeding Raikkonen at Turn 3 during the first part of qualifying.

Although it did not stop the Alfa Romeo driver progressing in the session, Wolff believes the penalty was in line with previous incidents of the same nature.

"The rulebook says if you impede somebody and it's clear, then you get a three-place penalty," said Wolff.

"I think it's not the driver's fault. He didn't see him.

"These things happen and there is precedent for it.

"From our perspective we have to accept the penalty." 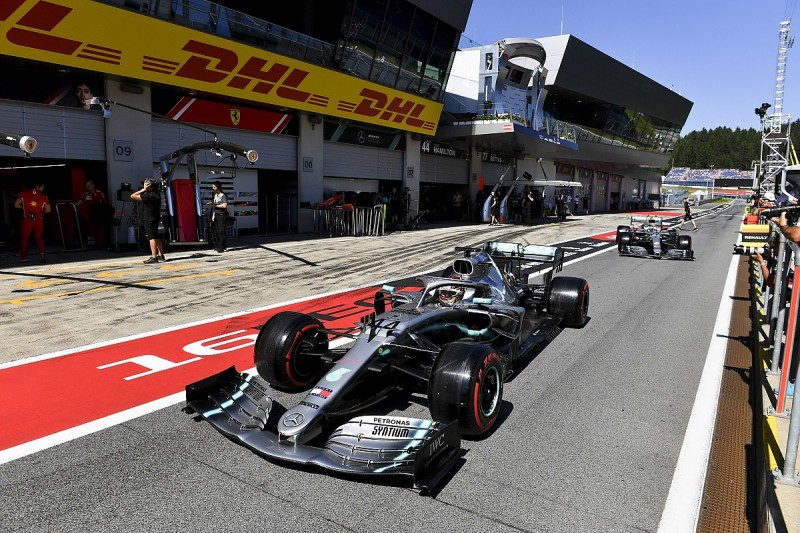 The incident with Raikkonen occurred just after Hamilton had left the pitlane.

As Hamilton left the pits he was informed that the two Alfa drivers would be behind him, but without a specific time as Hamilton was not on-track properly.

Antonio Giovinazzi was ahead almost as soon as Hamilton joined the track and Hamilton then received the message "Raikkonen behind" just as he reached the top of the hill.

Hamilton jinked to the inside line, but then opted to go across the track and onto the run-off on the outside of the corner to get out of the way.

Asked by Autosport if the driver should be penalised in situations where the team is more responsible, Wolff said: "You see how crowded it is, there are many people out there that are trying to do laps.

"When there are 20 cars these things can happen.

"The precedent is that it's been penalised.

"If the precedent would be that it's not been penalised, because for example it hasn't really changed the result for the driver, then I think we should look at it.

"But the rules are very clear at the moment."

Hamilton's penalty drops him behind title rival and team-mate Valtteri Bottas on the grid.

Bottas said it was a "big opportunity" for him to eat into Hamilton's 36-point championship lead.

"I need to make the most out of it and try and close the gap and have a good race," said Bottas.

"If winning is possible, which I still believe it is, then obviously that's the target but if not then we need to get the maximum points that are going to be possible.

"It's an opportunity to get closer to him in the points, obviously for me it's one position better [on the grid], which you'll always take.

"He's not starting far away and he'll be trying everything to come up but it's a decent starting place to the race if we look at the championship."