Testing in Bahrain this week not only marks the first on-track action of 2021, but also bring the Formula 1 drivers together for the first time since Abu Dhabi.

Beyond the typical back in the office ‘how was your Christmas?’ chat, the drivers will have a number of important issues to discuss ahead of the new season.

It will mark a first group meeting for the drivers since Stefano Domenicali started as the new president and CEO of F1, giving the Italian a chance to talk about ideas and plans for 2021.

One matter Domenicali is keen to discuss with the drivers surrounds the pre-race messaging against racism and highlighting social issues around the world, which was introduced at the start of the 2020 season in Austria.

"I've invited them for a meeting that we need to have as soon as possible physically,” Domenicali said last month. "The target will be to have it in Bahrain, if it's possible, to really discuss and share this opportunity.

"We have never had, I would say in F1, so many fantastic drivers, young, talented, very strong, and we cannot lose the opportunity of making sure they understand they are more than drivers.

"They have a big responsibility because they are the face of the sport. They have to understand [the importance of] their behaviour, their words, and [that] we lead by example, is the approach I'm expecting to share with.”

F1 has already announced tweaks to its ‘We Race As One’ messaging for 2021, dropping the rainbow logo. The series confirmed it would “plan to include a moment before the start of each race this season to show our united support for important issues”, as it did last year. 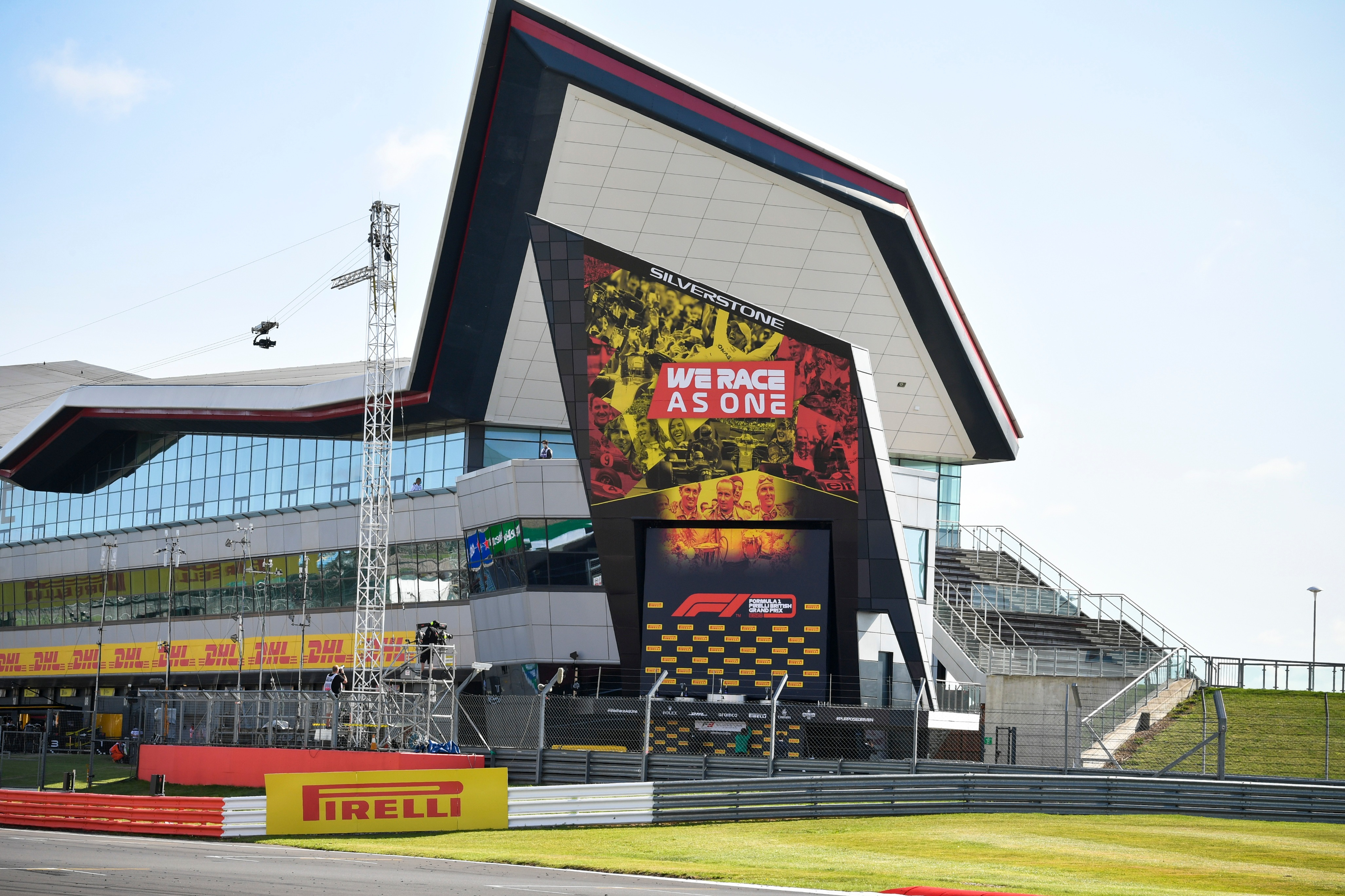 We Race As One banner, Formula 1 Silverstone 2020

The most notable part of the pre-race messaging last year was the opportunity for drivers to take a knee on the grid before the start. The gesture divided opinion through the grid. Six of the 20 drivers - Charles Leclerc, Carlos Sainz Jr, Max Verstappen, Daniil Kvyat, Antonio Giovinazzi and Kimi Raikkonen - did not take a knee at any race, while Kevin Magnussen from Haas only took a knee for the first two races.

All seven drivers reiterated their support for F1’s End Racism campaign, but felt there were other ways to convey this. Magnussen in particular aired concerns about the links between kneeling and the Black Lives Matter organisation, saying he wanted to separate himself from the political organisation.

Questions about the significance of taking a knee across sport have been recurring in recent months. Players have taken a knee before every single Premier League fixture since top-flight football resumed last year, and have continued to do so throughout the 2020-21 season.

Crystal Palace football Wilfried Zaha said during a Financial Times event last month that he would no longer be taking a knee before games, calling it “degrading”.

“Growing up, my parents just let me know that I should be proud to be black no matter what and I feel like we should just stand tall,” Zaha said.

"Trying to get the meaning behind it, it's becoming something that we just do now and that's not enough for me. I'm not going to take the knee.” 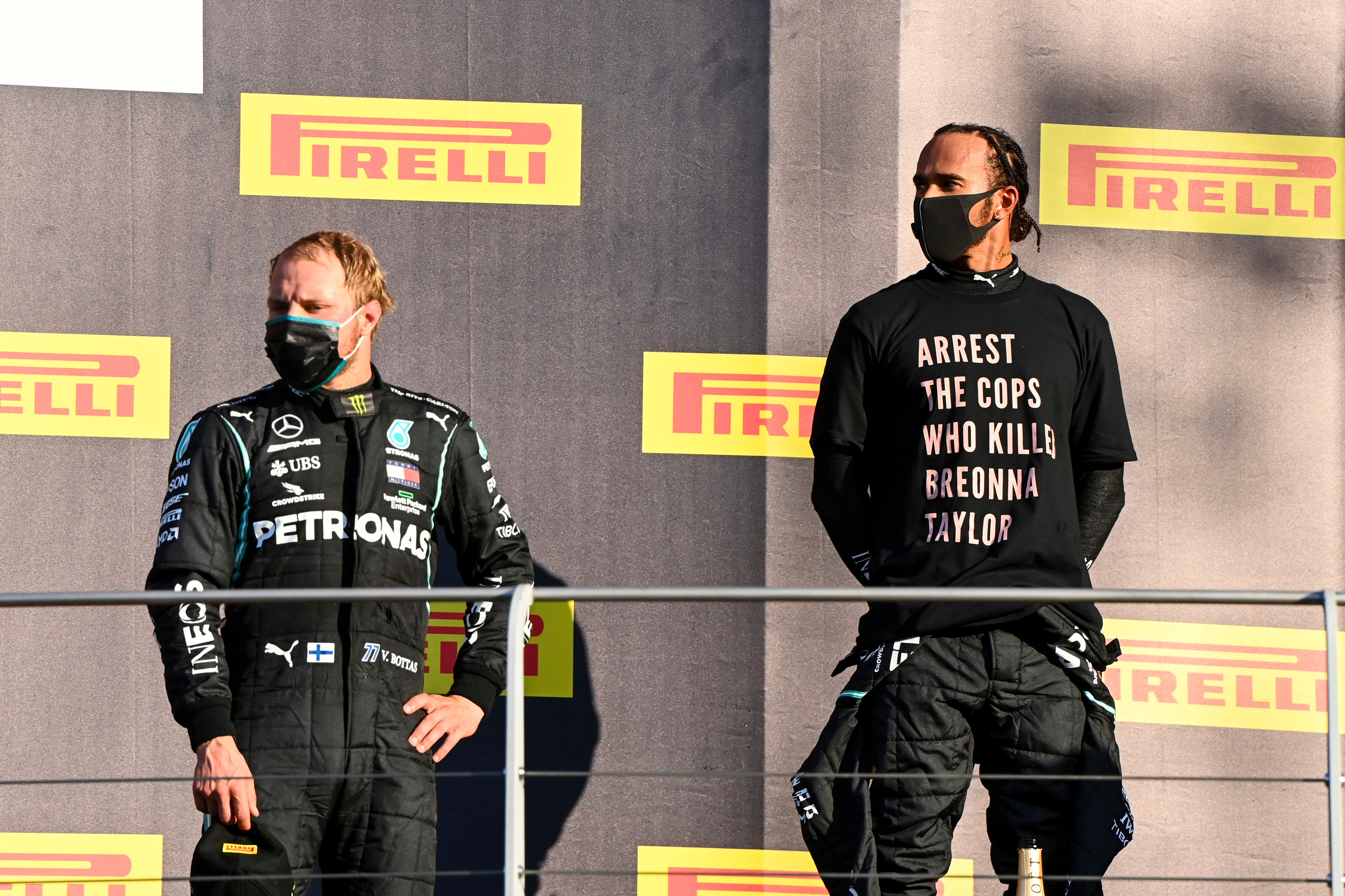 Lewis Hamilton has been vocal throughout his campaigning in the past 12 months that all of F1’s actions cannot be performative: they must have meaning. Hamilton himself has launched The Hamilton Commission, which will work to improve diversity throughout motorsport, and is also creating a charity with Mercedes to achieve the same goal.

Speaking during the launch of Mercedes’ new car whether he would continue to take a knee, Hamilton recognised that while taking a knee was ultimately symbolic, he also felt it could be “really impactful”.

But he again highlighted the importance of real action and wide-reaching change taking place behind the scenes in F1 and across motorsport.

“We are entering into another year, at the moment it has not been decided what we will do,” Hamilton said.

“But we are all meeting when we get to Bahrain, so I’m sure that will be part of the discussion with Stefano for example.

“I don’t think it is the most important thing that everyone does take the knee. I think it is more the action that we take in the background.

“Things pass and things die down. It is important that it continues to be an issue that affects my day to day life and so many people out there. 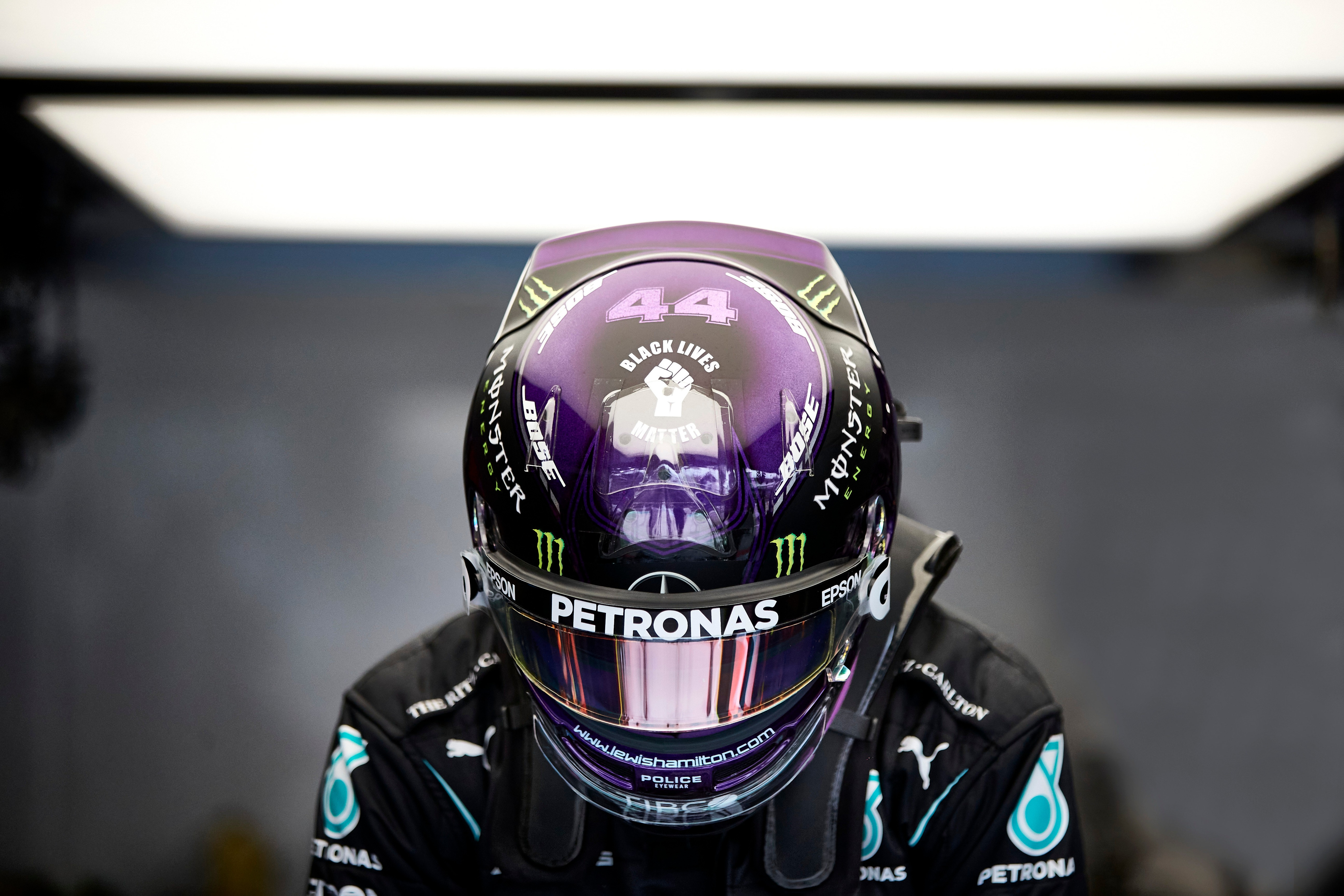 “I think it is really important to continue having that conversation. It goes back to accountability and continuing to hold uncomfortable conversations with people, because change is possible and change is needed.

“We will see how we can collectively work together to make sure we are leading more in this sport, and that doesn’t necessarily mean taking the knee.”

The formation of a new charity with Mercedes was a key part of the team's announcement of Hamilton’s new one-year contract for 2021.

“I’m very proud of Mercedes for being open-minded to change, and not just taking the smallest of steps, really taking a step and back and seeing what we can do,” Hamilton said.

“We’ve done a real deep dive into what we can do here, not only at the factory but back at Mercedes-Benz. For them to be open to putting a foundation together and really putting some money towards pushing for real systematic change within our organisation, I think is fantastic.

"If we really do what we’re planning to do, I really think we’re going to create and open up pathways for young minorities to get into STEM subjects.

“I’m really hopeful that in the future we see it just being more diverse. Because it just works out better for everyone.” 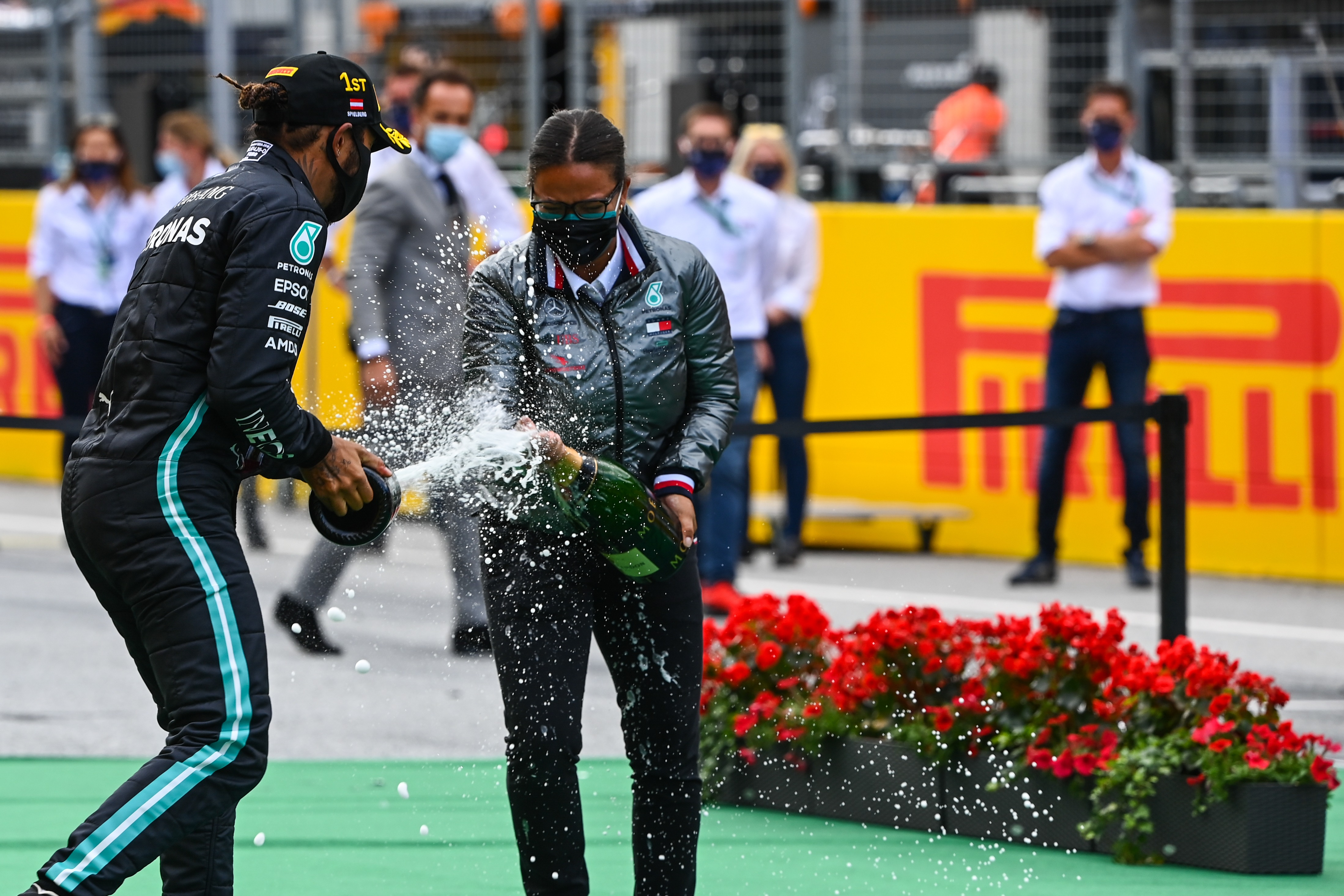 F1 is also committed to pushing for similar change. The series has already highlighted diversity and inclusion as being one of the key pillars for We Race as One this year.

F1 said it would focus this year on “rolling out internships and apprenticeships within Formula 1 for under-represented groups to provide access to a promising career in the sport” and “funding scholarships for talented engineering students from diverse and underprivileged backgrounds with work experience opportunities at F1 and the teams during their studies”.

The discussions in Bahrain surrounding F1’s plans for 2021 and its messaging will be important, with Hamilton set to once again be a key voice for the series. Taking a knee remains impactful, but as Hamilton has highlighted, the push for change both in F1 and across the board in motorsport must go further. 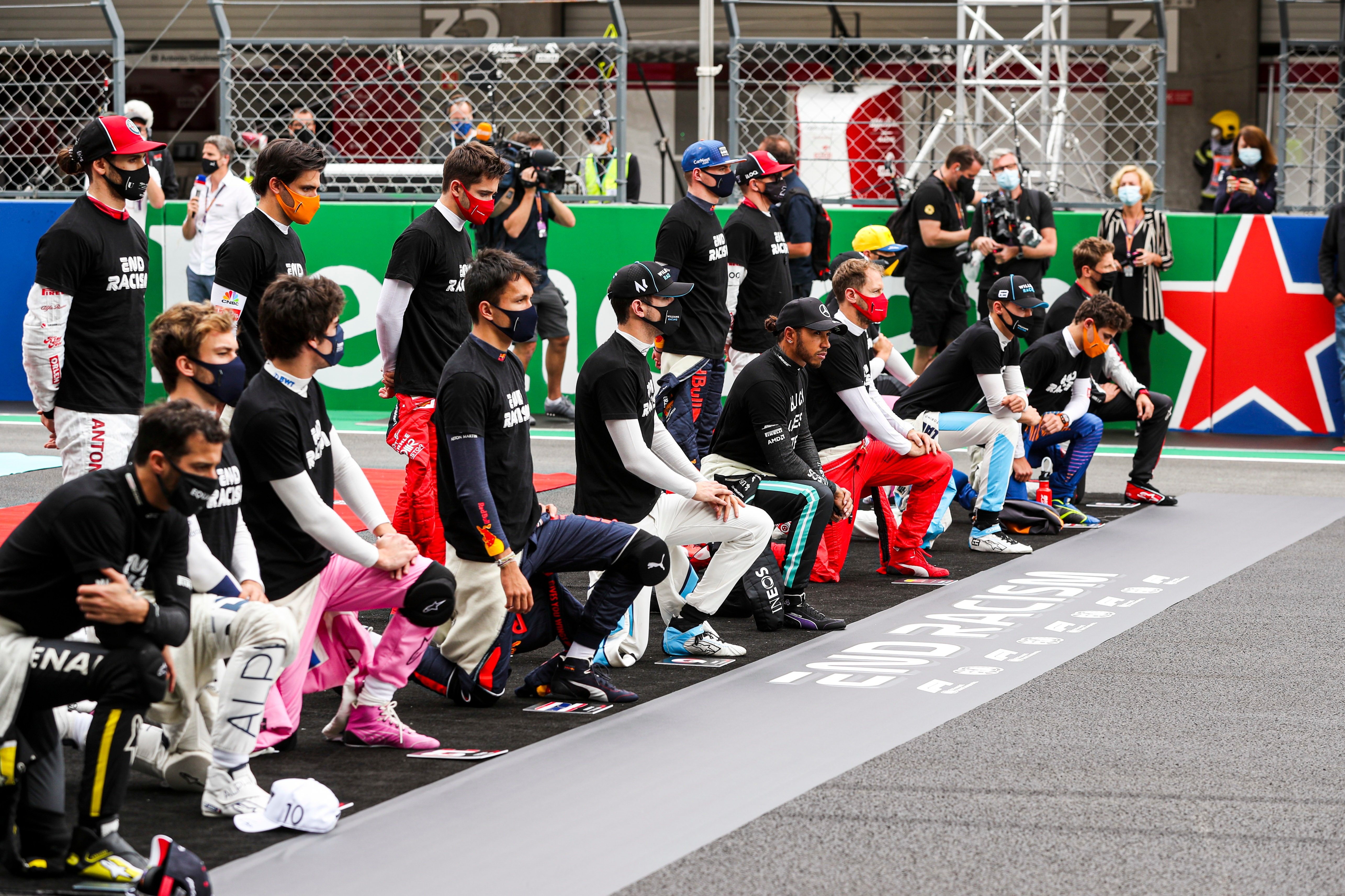