A second steering wheel input from Sebastian Vettel after he regained control of his Ferrari Formula 1 car was pivotal in his Canadian Grand Prix penalty, Autosport has learned

The Montreal F1 stewards ruled that Vettel had rejoined the track in an unsafe manner following his error at the first chicane with 22 laps to go and forced Lewis Hamilton off the circuit.

The five-second penalty imposed for the incident meant Vettel lost what would have been his and Ferrari's first win of the 2019 F1 season to Hamilton.

Vettel was adamant he had done nothing wrong, and said he had been powerless in the situation because his car was out of control after running over the grass.

But while it is clear from on board footage that Vettel was battling to control his car as he bounced off the grass onto the circuit again, it is understood that the stewards' decision was based on Vettel's actions at the point he had effectively recovered from the incident.

The stewards examined slow motion footage of Vettel's actions from the moment that he had regained control and started steering his car - and felt the evidence showed that he could have made different choices that would have been within the rules.

The footage clearly captures Vettel correcting an oversteer moment as he rejoins the track - which is shown by a sharp steering wheel movement to the right.

Shortly after that, Vettel has sorted the oversteer and begins steering to the left to follow the direction of the circuit - suggesting he is now under control.

But a split moment later, rather than keeping to the left, Vettel is shown to release the steering wheel - which allows his car to drift to the right, cutting off the route that Hamilton would have taken had he had clear space.

The movement to straighten the wheel, which put the Ferrari into the path of Hamilton's Mercedes, is believed to be key to the unanimous decision by the stewards to punish Vettel.

The stewards also used an extra CCTV camera view of the incident, which was not broadcast on the international television feed, showing Vettel moving his head and looking in the mirrors to see Hamilton was during the moments when he was releasing the wheel to the right.

On board footage of the Vettel incident also shows his head turning towards the mirrors in the moment when he is drifting out - suggesting he knew where Hamilton was.

Had Vettel kept his car tight to the left once he had regained control, then there was likely enough room to have allowed Hamilton through on the right - in which case the matter would almost certainly not have been investigated.

The fact that telemetry data showed Hamilton had to brake to avoid the collision with Vettel indicated how the Mercedes driver was caught out by his rival's actions. 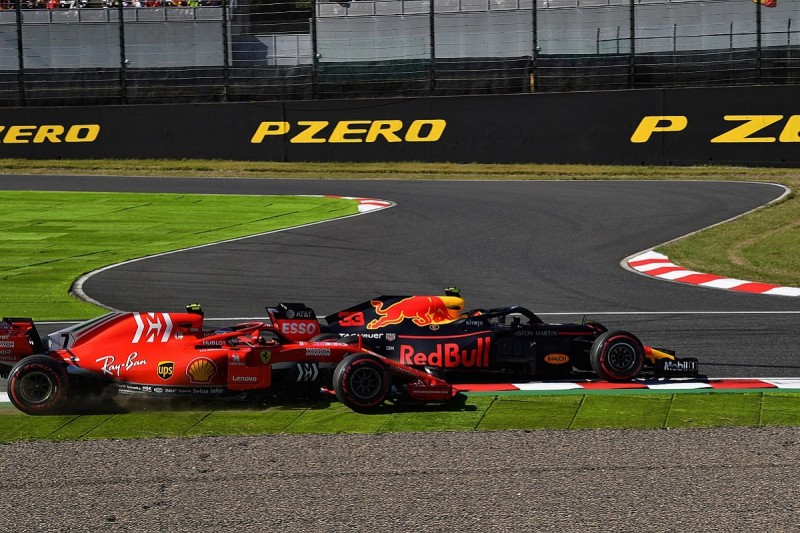 Precedent for the decision to punish Vettel for both rejoining the track in an unsafe manner and forcing a rival off the track was made last year in Japan when Max Verstappen was hit with a five-second penalty for a collision with Kimi Raikkonen at the chicane.

Verstappen had run wide at the chicane on the first lap of the race and rejoined in an aggressive manner, pushing Raikkonen wide on the exit.

At the time, the late F1 race director Charlie Whiting said: "You are required to rejoin safely and Kimi was there and [Verstappen was] pushing him off the track. So I think that was a fairly straightforward one for the stewards."

Lewis Hamilton: I'd have done the same as Sebastian Vettel