The debate has been further stoked by the FIA opening an investigation into whether Vettel, hit with a 10-second stop/go penalty during the race, deserves further punishment.

There have been suggestions that Vettel should receive a ban for his actions, but a look back through F1's history shows that punishment is used very rarely. 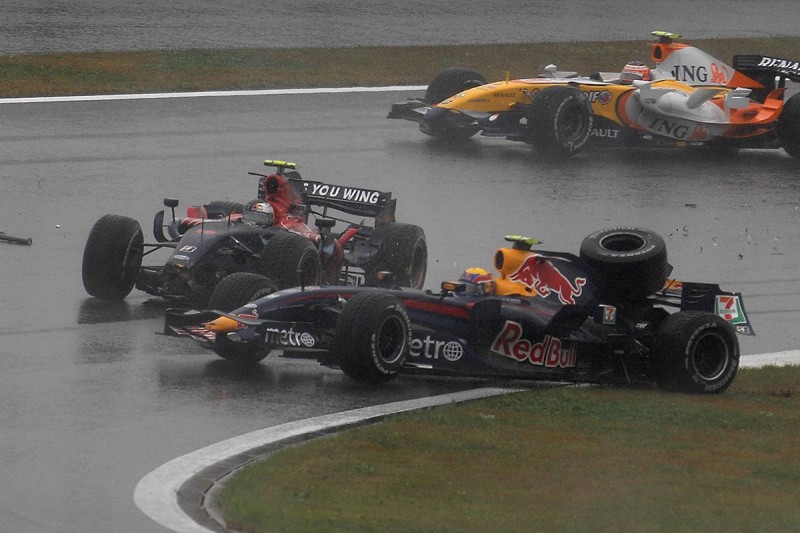 Nobody has ever served a penalty for an incident behind the safety car, although Vettel briefly picked one up for colliding with Mark Webber in the rain at Fuji in 2007 - before that was overturned ahead of the following race in China.

In 2000 Williams rookie Jenson Button crashed on the run to Monza's Parabolica when he was caught out when Michael Schumacher backed up the field as the Ferrari ace prepared for the restart. There was no penalty, but Schumacher subsequently apologised to the youngster. 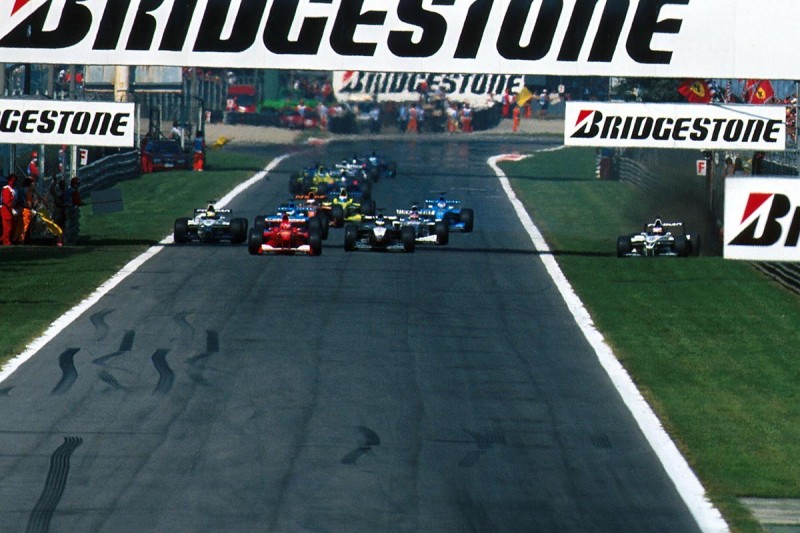 The same teams were involved in a more controversial incident in Monaco in 2004, when Juan Pablo Montoya ran into Schumacher in the tunnel while the German was weaving to warm his tyres.

The crash ended Schumacher's race, and the stewards deemed it a racing incident. 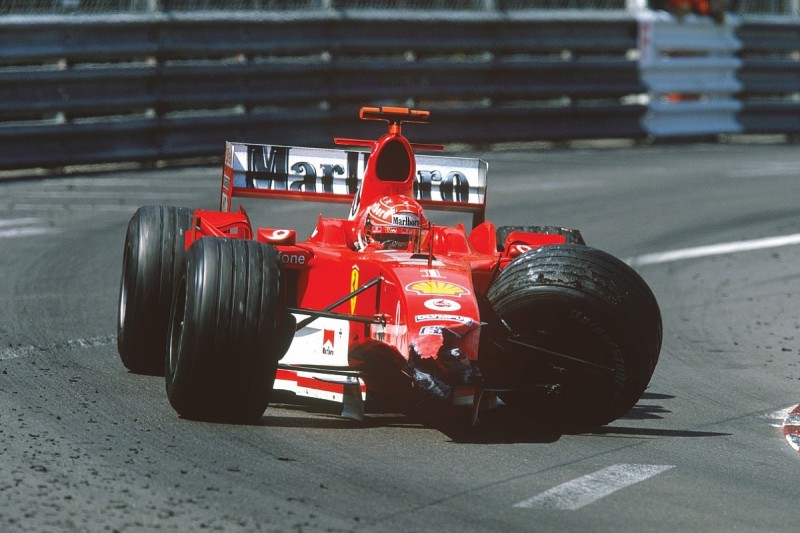 When Romain Grosjean was forced to miss the 2012 Italian Grand Prix, it was the first time a driver was banned from a race in more than a decade.

The Frenchman had a disastrous time with Lotus that season, and matters came to a head when he triggered a multi-car accident at the start of the Belgian GP.

Title challengers Fernando Alonso and Lewis Hamilton were among those eliminated, and stewards duly slapped Grosjean with a one-race ban. 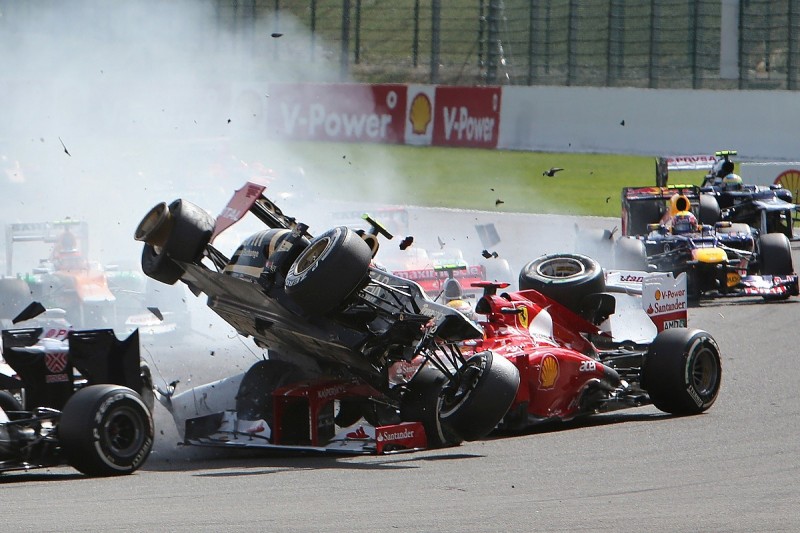 Grosjean was only the fifth driver to have been forced to miss a race through an FIA sanction.

Nigel Mansell was the first driver to suffer an official FIA ban. He was reported for reversing in the pitlane in the 1989 Portuguese Grand Prix, and the stewards called him in with a black flag.

The Ferrari driver failed to respond to the signals, and subsequently collided with Ayrton Senna later in the race. He was banned from the next race in Spain as a result. 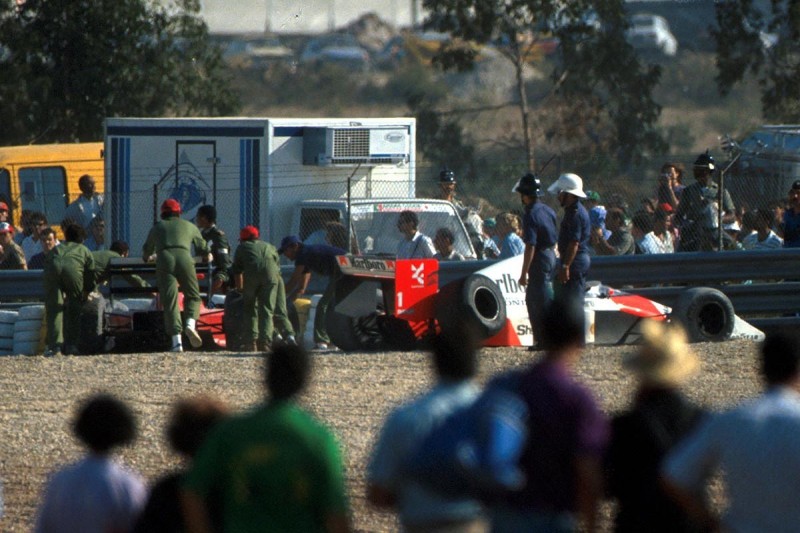 Three drivers were banned from races in the 1994 season, starting with Eddie Irvine when he was deemed responsible for triggering a four-car accident at the Brazilian Grand Prix.

When his Jordan team appealed the one-race ban, the penalty was tripled to three races - in effect a warning to teams not to make frivolous appeals in the future.

At British GP that year Michael Schumacher was black-flagged for passing Damon Hill on the warm-up lap, a signal he initially ignored while his Benetton team argued with officials in the pits. 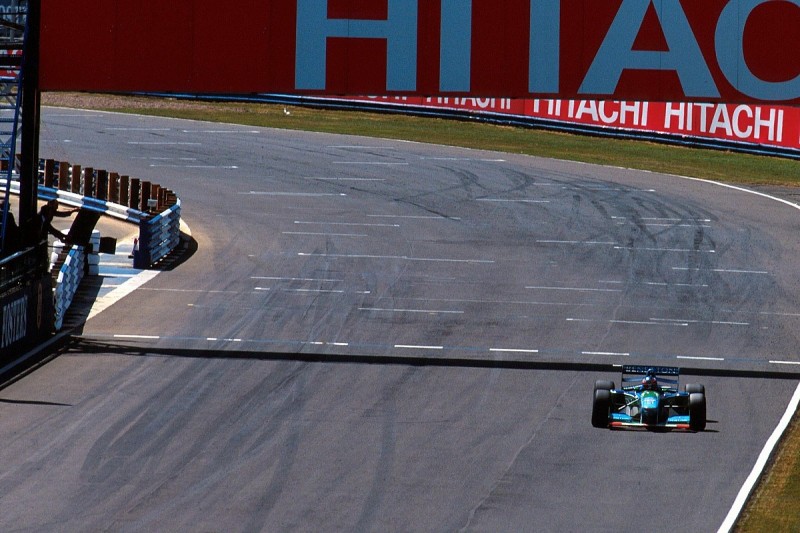 Schumacher eventually came in to serve a penalty, and finished second on the road. It initially only earned the team a $25,000 fine, but when the matter was taken further by the FIA he lost the race result and was banned from both the Italian and Portuguese GPs.

Next time out at Hockenheim the McLaren driver was involved in a first corner crash, the Silverstone penalty was triggered, and he was forced to miss the Hungarian GP. 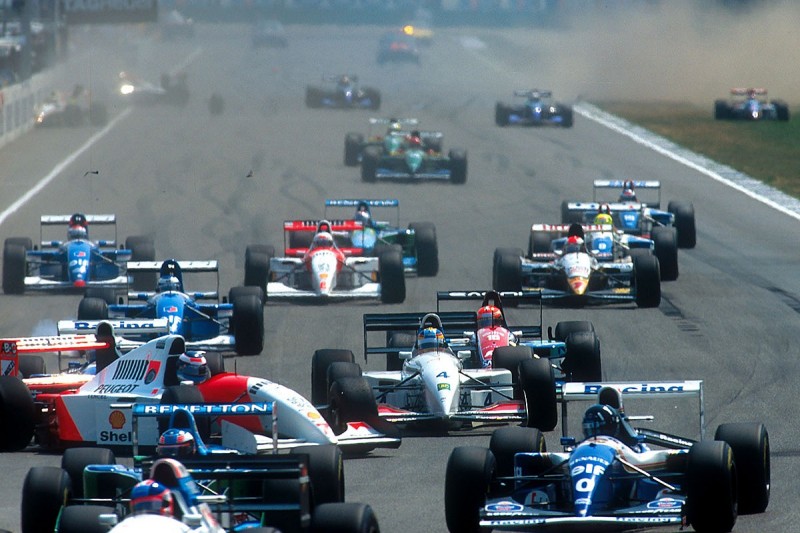 In 1976, thousands of fans had seen James Hunt win the British GP, a race stopped and restarted after a first corner accident.

Weeks later in court it was deemed that Hunt should not have been allowed to take the restart, and he was disqualified.

Retrospective action was also taken against Schumacher following his infamous clash with Jacques Villeneuve while fighting for the 1997 title in the finale at Jerez.

Schumacher received the unprecedented penalty of having his position in the world championship removed - Heinz-Harald Frentzen inherited second - although curiously Schumacher did not lose any of his results. 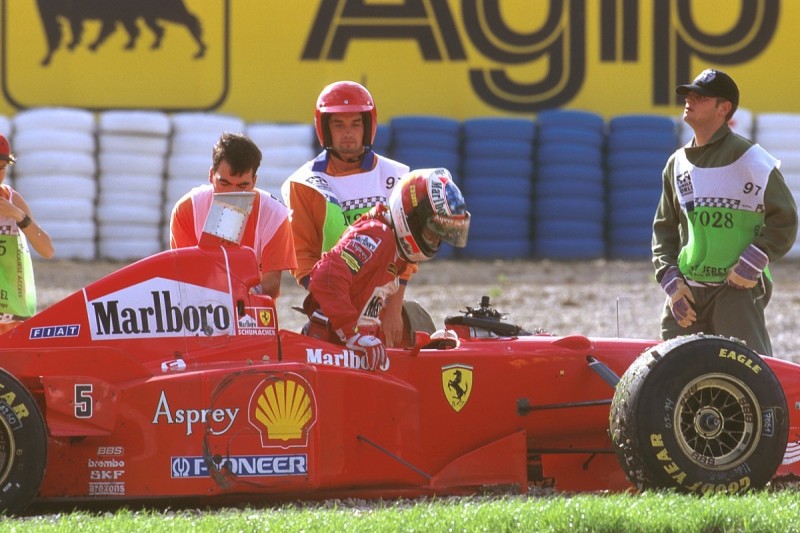 He was still the winner of five 1997 GPs, and he kept the 78 points he added to his official career tally that season.

Cases can be re-opened when new evidence emerges, as happened after the 2009 Australian GP.

At that race Jarno Trulli was penalised for passing Hamilton under the safety car, and it was only after the race that the FIA learned that Hamilton had initially told the media that he had waved the Italian past - before telling a different story later on to the Stewards. 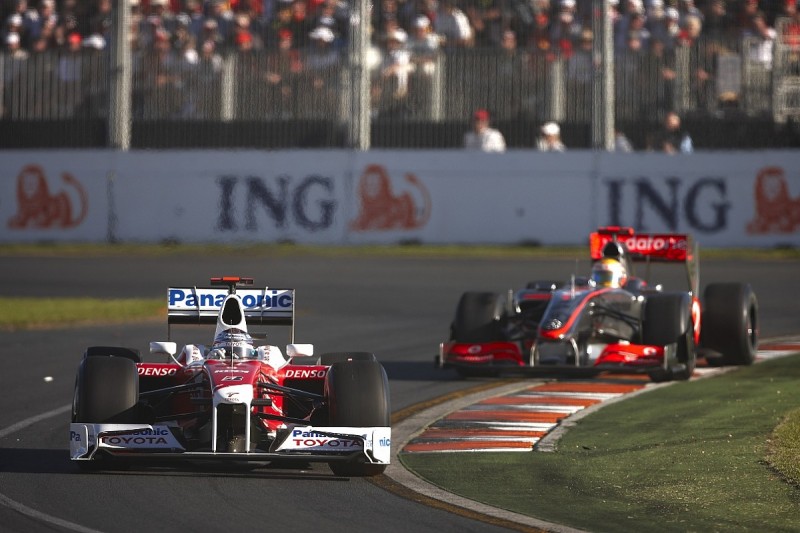 The matter was examined at the following weekend's Malaysian GP, and Hamilton was excluded from the results.

At the start of 1994 Ayrton Senna was racing under a six-month suspended two-race ban after verbally and physically assaulting Eddie Irvine after the 1993 Japanese GP, in which the Jordan rookie had unlapped himself.

In 1997, at the Italian GP, title contender Villeneuve was given a nine-race suspended ban for failing to slow sufficiently under yellow flags in the race morning warm-up. 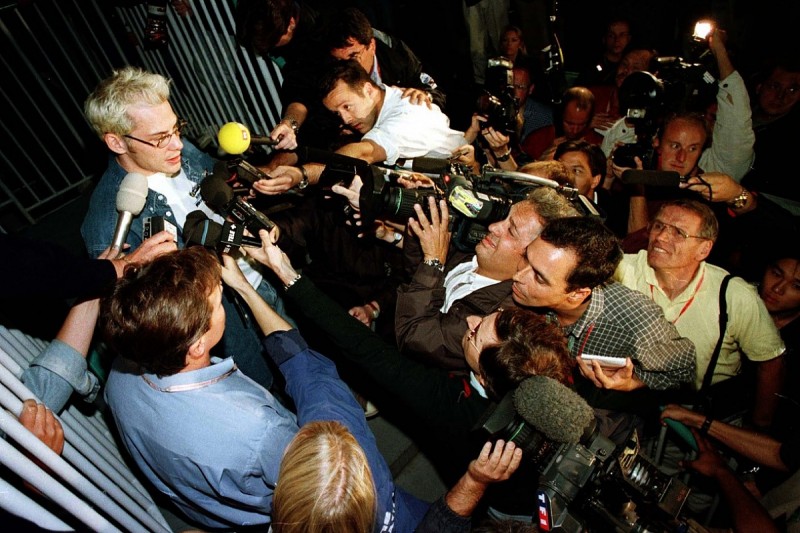 When Villeneuve drove too quickly under yellow flags again during the Japanese GP weekend the ban was triggered, but he raced under appeal, which Williams withdrew after the event, forfeiting the result after only finishing fifth.

Riccardo Patrese was forced to sit out the 1978 US GP in the aftermath of the tragic Monza accident that cost Ronnie Peterson his life, but he was not banned by the authorities - it was the result of a driver ultimatum. 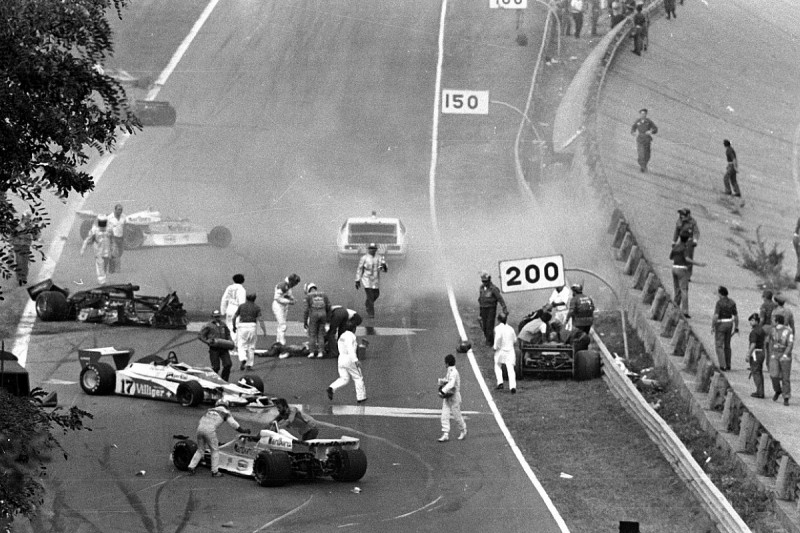 While Patrese was widely blamed by his rivals for the Monza accident, he had also annoyed several drivers that season, including Peterson, and it was felt that he was unwilling to take responsibility for his part in any incidents.

After Monza the drivers got together and issued an ultimatum - if Patrese races at Watkins Glen, we don't. The organisers of the US event declined his entry.

When Felipe Massa missed the US GP in 2002 it was due to a decision by his Sauber team. He had earned a 10-place grid penalty for dangerous driving in a clash with the Jaguar of Pedro de la Rosa, and in those days the rules specified 'the next' and not 'his next' race. 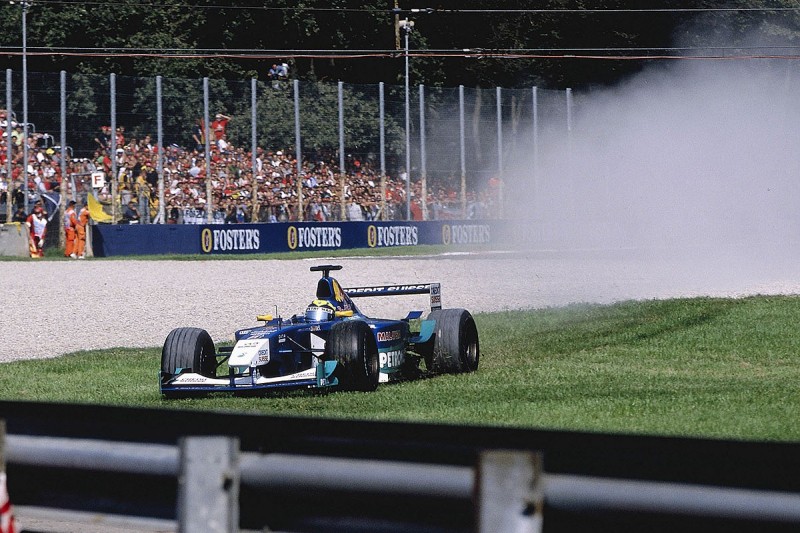 Sauber negated the penalty by benching the young Brazilian and recalling Heinz-Harald Frentzen for the weekend.

WHAT NEXT FOR VETTEL?

There is no "new evidence" in the Hamilton/Vettel case, other than the fact that Vettel will have a chance to speak in person - he didn't have contact with the Stewards in Baku.

Vettel is already close to earning a ban through licence penalty points - he's currently on nine points, accumulated through four incidents (including the three earned in Baku).

Three more points in Austria will trigger a ban - after that the two points he picked up at Silverstone last year are dropped, and he'll be on a safe number for a while.

Perhaps key to the discussion will be the question of setting an example to young racers, something that Hamilton was keen to stress on Sunday evening - the FIA also takes its road safety campaign very seriously, and road rage is a key part of the message. 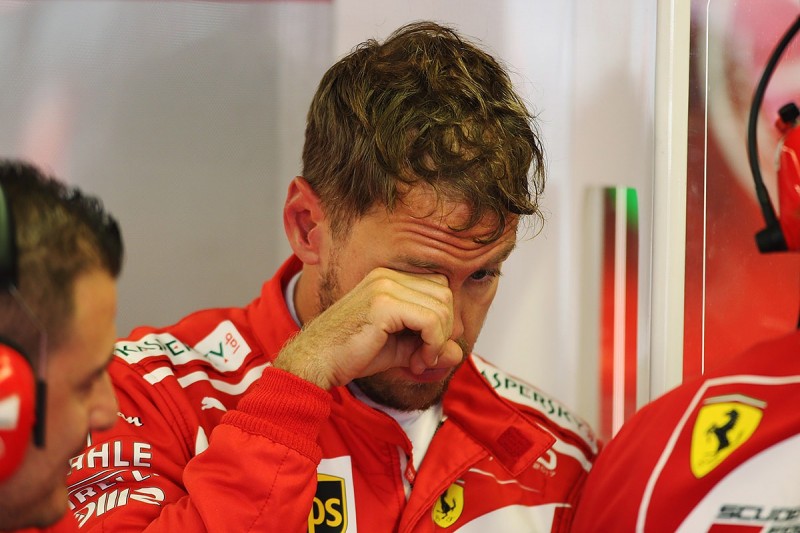