Alpine’s Formula 1 engine partner Renault thinks a revamped water pump for 2023 should address most of the reliability problems the team faced this season.

While Alpine made good progress in speed terms in 2022, as it emerged as best-of-the-rest behind Red Bull, Ferrari and Mercedes, it did endure a spate of frustrating retirements too.

Those DNFs left Fernando Alonso particularly annoyed, especially as a run of engine failures ran almost all the way to the end of the season.

Speaking after another retirement in Mexico, Alonso said he felt that Alpine had not done its homework properly.

“I think we are unprepared,” he said. “I blew up five engines this year, I think. The problem in the qualifying in Australia; in Austria, I didn't even start the race because of the blackout. So I think in 19 races, more or less 50% of the races, we haven't scored the points we deserve.”

But, while the run of engine problems appeared to be a major headache, Renault’s engine chief Bruno Famin insists there was nothing fundamentally wrong with the core design of its power unit.

Instead, he says problems revolved around engine auxiliaries, such as the water pump, which are well on their way to being sorted for 2023.

“We have not got really major issue on the engine itself, on the ICE,” explained Famin, who joined Alpine’s F1 project earlier this year.

“We had problems in Singapore, which is a fact. It was very strange in fact because to have two different problems in eight laps difference was quite incredible, but we had it.

“All the other problems we had were much more on the auxiliaries side; water pump, fuel pump. And this is something we are quite optimistic that we will be able to solve for ’23.” 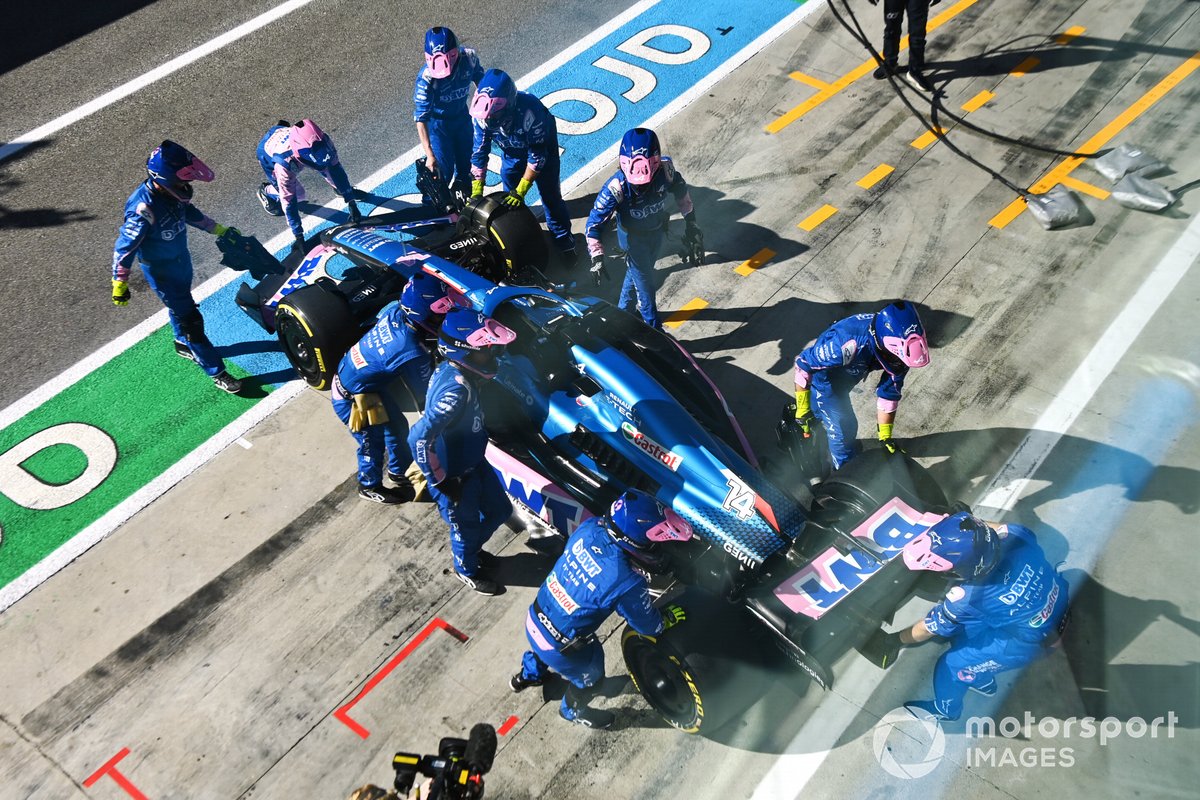 Alpine mechanics push the retired car of Fernando Alonso, Alpine A522, into the garage

Famin sees no need for Renault to turn down the performance of the power unit, and believes a change of concept in some of the external parts will be enough to address the factors that went wrong in 2022.

“I think we are not going to go back in anything,” he said. “We are going to work and we are already working deeply on details especially on the auxiliary side.

“The water pump has been a headache all season long for us. We improved it as much as we could in ’22, but it was clearly not enough.

“It was the concept itself of the water pump we had to change, and we are going to change it for ’23. Then we really hope that the problem will be solved from next year.”

Famin also thinks there are gains to come from being able to better validate the reliability of parts this winter – having pushed development to the limit in chasing performance before the introduction of an engine freeze at the beginning of 2022.

“We are pushing our validation processes and trying to improve it and trying to do it in the best possible way for a much better way than we have done for ’22,” he said.

“If we had not done it fully in ’22, it was not because we did not want this. It was because we preferred to push on the development side.

“The target for ’23 is to keep the same level of performance for sure and to make everything reliable.”