Max Verstappen has blamed Lewis Hamilton squeezing him out across the kerbs at the first chicane at Monza as the trigger for their crash in Formula 1's Italian Grand Prix.

The Dutchman and title rival Hamilton were battling for position on track at Monza following the first round of pitstops as they ran wheel-to-wheel after the pitlane exit.

Hamilton defended the inside into the first chicane, with Verstappen attempting to go around the outside and claim the apex for the left handed exit.

However, he ended up bouncing over the kerbs and was launched over Hamilton's car – putting them both out on the spot.

Verstappen insisted that there was plenty of room for the pair of them to run side-by-side, but says the clash became inevitable once he was pushed on to the sausage kerb.

The FIA stewards disagreed, reasoning that the Dutchman was "predominantly" to blame and handed him a three-place grid drop for the Russian Grand Prix, as well as two penalty points on his license.

Speaking to Sky Sports F1 before the stewards' verdict was delivered, Verstappen said: "We realised it was going to be close into Turn 1.

"[Hamilton had to] cut across after the white line [at the pitlane exit] and I had to go on to the green part to not touch.

"I went around the outside. And of course, he realised I was going for it so he just kept on squeezing me. 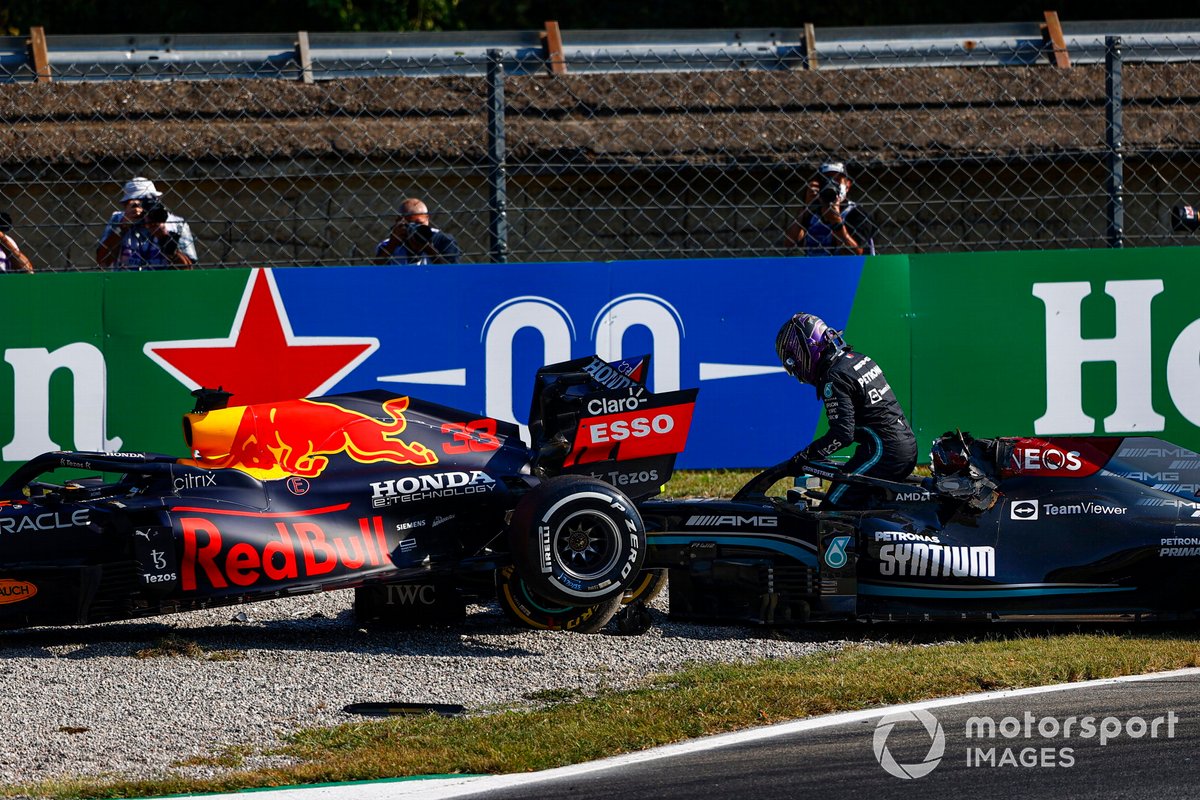 Lewis Hamilton, Mercedes, climbs out of his car after crashing out with Max Verstappen, Red Bull Racing RB16B

"But then he just kept on pushing me wider and wider. And at one point, there was nowhere to go.

"He just pushed me onto the sausage kerb. And that's why, at the end of the day, we touched because of the rear tyre."

Hamilton, for his part, said that Verstappen knew "what was going to happen", while Mercedes boss Toto Wolff accused Verstappen of making a "tactical foul".

Verstappen felt that there was no similarity between what happened at Monza and their crash the pair had at the British Grand Prix, when contact into the high-speed Copse corner on the opening lap fired Verstappen into a heavy impact with the wall.

"I wanted to work with him because I wanted to race," he added. "Of course people then automatically start talking about Silverstone, but these things happen.

"Of course, it was not nice at the time. But I think we're all professional enough to just get on with it and keep on racing each other."

Verstappen added that if the pair wanted to race fairly, then they needed to work together, something he felt wasn't happening right now.

"You need two people to work together, right?" he explained. "So if you one guy is not willing to work, then what do you do? It's still going to happen."

Asked if he planned to talk to Hamilton in private about the situation, Verstappen said: "I think we're professional enough to step over it and just keep on going."