Max Verstappen says he is “not interested” in getting involved in the continued chatter surrounding his crash with Formula 1 title rival Lewis Hamilton at Silverstone.

Verstappen and Hamilton collided at high-speed while fighting for the lead on the opening lap of the British Grand Prix, resulting in a 51G crash for Verstappen at Copse.

Mercedes driver Hamilton was deemed to be predominantly at fault for the crash, resulting in a 10-second time penalty, but he recovered to win the race and cut Verstappen’s lead at the top of the drivers’ championship.

The incident led to an angry response from Red Bull F1 chief Christian Horner, who called Hamilton’s move “desperate” and “amateur”, and criticised Mercedes’ decision to celebrate while Verstappen was being checked over in hospital.

Mercedes boss Toto Wolff felt that Red Bull had gone too far in its comments, but Horner reiterated his criticisms and confirmed the team was exploring its options for further action. 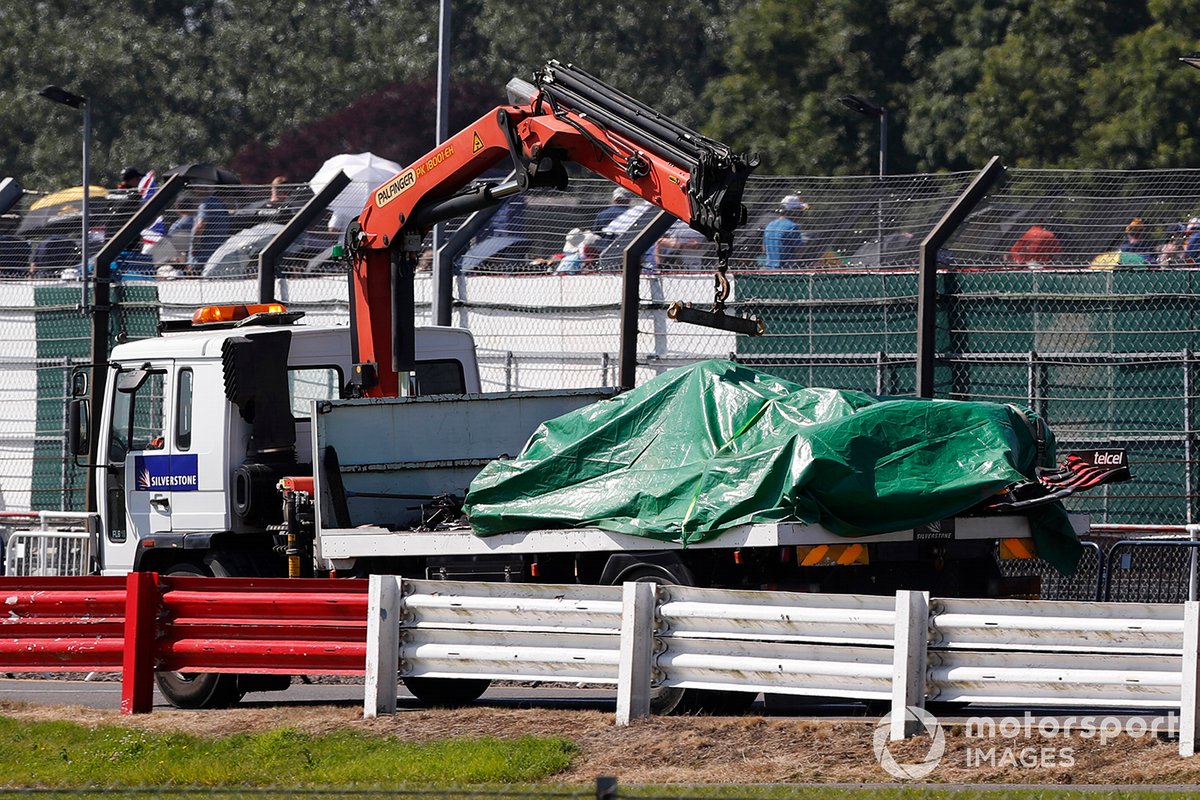 The car of Max Verstappen, Red Bull Racing RB16B, is returned to the garage on a truck

The FIA announced on Tuesday that a right to review the incident had been lodged by Red Bull, with a hearing scheduled for Thursday in Hungary.

But amid the ongoing buzz around the incident, Verstappen said in Red Bull’s preview for Hungary that he had little interest in saying anything to add to the matter.

“I don’t have much to say on all the media hype, and to be honest, I am not interested in getting involved in any of that,” Verstappen said.

“I know what happened at Silverstone as I was in the car and obviously I feel a certain way about how my race ended, but now I’m just focusing on making sure we are the best we can be on track so we can stay ahead in the championship.

“The team can take care of the official side of things and anything that needs looking into after the crash but my job is the same as always: to be the best I can and try to win on Sunday.”

Verstappen was left feeling sore and bruised following the impact at Silverstone, and was taken to hospital for precautionary CT and MRI scans before being released a few hours later.

The Dutch driver prepared for his return to the cockpit in Hungary by completing a 24-hour sim race last weekend, entering the iRacing 24 Hours of Spa, and has posted pictures on social media of himself back in training.

“I’m a little bruised of course but that’s normal after such a big impact but I’m training and feeling good,” Verstappen said.

“I did a 24-hour sim race this week and it was a good test to see how my body would react to spending time sat in one position and behind screens for a long time.

“I felt absolutely fine which makes me feel positive heading into the weekend. I’m definitely ready to go again.”