Red Bull's Max Verstappen has topped the first day of Formula 1 pre-season testing in Bahrain, as Mercedes' 2021 campaign got off to a low-key start.

In the final hour of the afternoon, Verstappen clocked a time of 1m30.674s with medium tyres on his RB16B to stay on top until the chequered flag.

As expected, the four-hour session was plagued by a sandstorm that lowered visibility and grip levels at the Bahrain International Circuit.

In the opening stages, few cars ventured out on track and those who did gingerly got to grips with the conditions.

Haas driver Nikita Mazepin posted the ninth-quickest time overall early on, the first driver to dislodge any of the 10 morning runners.

The Russian was soon joined by AlphaTauri's Yuki Tsunoda, who set the eighth-fastest time in the opening hour on his official F1 testing debut.

Carlos Sainz Jr then made his first appearance in the Ferrari SF21, some three hours after team-mate Charles Leclerc had to park the car with mechanical issues.

Sainz was one of several drivers to lock his tyres and slide off on Sakhir's sandy surface, with Alfa Romeo's Antonio Giovinazzi also coming out early doors to acclimatise to both the circuit and his new car.

World champion Lewis Hamilton waited until just before the hour mark to make his first appearance of the 2021 season, starting his afternoon shift with seven exploratory laps aboard the W12.

In the second hour, Giovinazzi was the first driver to set a solid time, posting a 1m32.860s on hard C2 tyres to go fourth in the Alfa, closely followed by Norris in the McLaren.

That encouraged Verstappen to have a crack at a fast lap time. Around 90 minutes into the session, the Dutchman beat Daniel Ricciardo's morning time by seven tenths, setting the new benchmark at 1m31.412s on hard tyres. 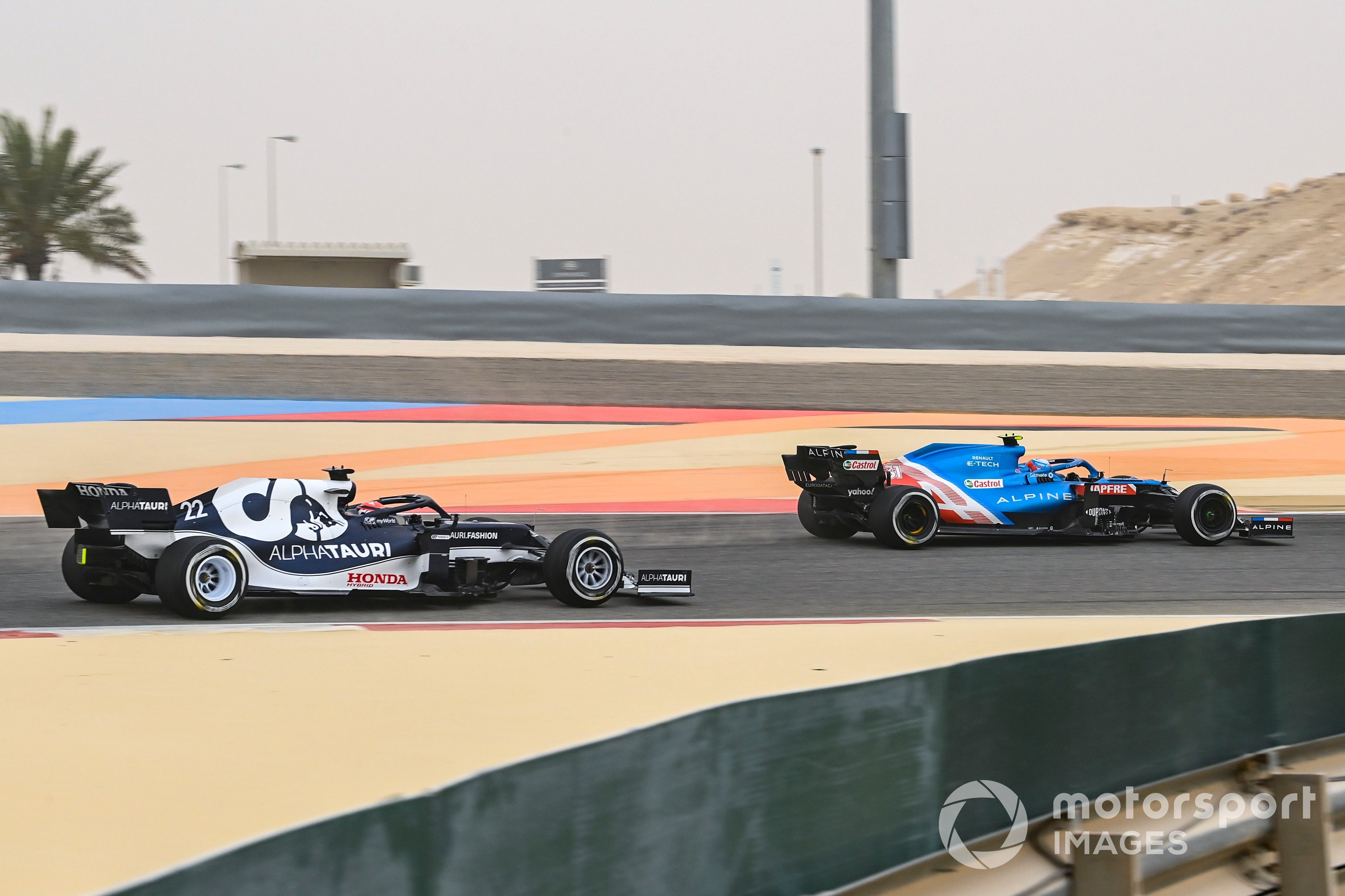 Giovinazzi then went second in the Alfa only to be overhauled at the halfway mark by Norris, who posted a 1m31.809s on hard tyres.

During the latter half of the session, desert sands continued to filter out a setting sun, but the track's floodlights pierced their way through the dust cover to provide some welcome visibility.

In the final hour, Verstappen found some more pace on the mediums to clock a 1m30.674s, going nine tenths clear of Ocon.

The Frenchman responded by taking half a second out of his personal best on the soft Pirelli tyres, his 1m31.146s half a second shy of the Red Bull.

In the final 30 minutes, Norris then leapfrogged Ocon with a 1m30.889s on mediums, demoting Ocon to third.

Lance Stroll's afternoon was delayed by what Aston Martin called a "small electrical issue" on his AMR21, but the Canadian came through to take fourth in the closing stages by setting a 1m31.782s on mediums. 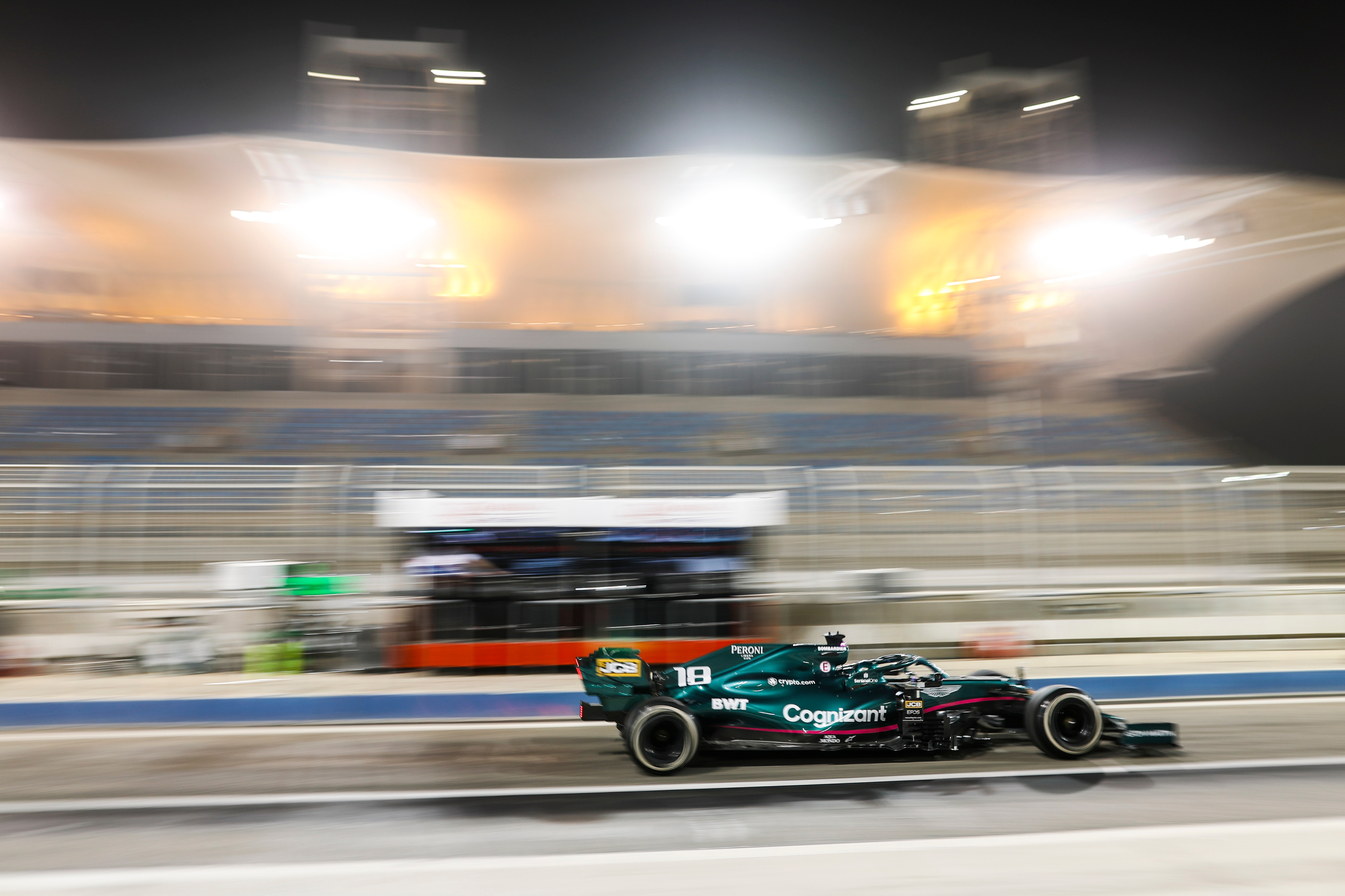 Sainz suffered a spin during his afternoon stint but finished fifth with a late 1m31.919s on medium Pirellis.

Behind sixth-placed Giovinazzi, Ricciardo's morning time held up for seventh place on the day, ahead of AlphaTauri duo Pierre Gasly and Tsunoda.

Hamilton rounded off a low-key start to his title defence with 10th place, 2.238s down on Verstappen's benchmark.

After team-mate Valtteri Bottas only managed six morning laps due to an undiagnosed gearbox issue, Hamilton added just 42 laps of his own, meaning Mercedes fell well short of completing its run plan.

Williams test driver Roy Nissany added to his morning tally to finish 14th, ahead of Haas youngsters Mazepin and Schumacher as well as Bottas.

In addition to setting the pace, Verstappen also logged the most miles on the day, turning a massive 139 laps.