The Finnish driver won three races in 2017 after Mercedes signed him from Williams on a one-year deal to replace Nico Rosberg.

He earned a contract extension for 2018 but he and team-mate Lewis Hamilton both need to negotiate new deals to remain with Mercedes.

Bottas told Autosport he was in "no rush" to secure his future and that talks had not started in earnest.

"I would like to stay with this team, hopefully for a long time," he said. "That is my target.

"As long as I keep performing like I've been performing this year so far, naturally it should be OK, all good."

Bottas joked that if Mercedes only offers him another one-year deal then "we need to talk", and reiterated he hopes to secure a multi-year agreement.

"I always kind of had one-year deals, so I would naturally like to know at least for the next two years what I'm going to do," he said.

The 28-year-old said he was not interested in receiving an offer from another team to gain leverage in discussions and said he had a good relationship with team boss Toto Wolff.

"We speak a lot," Bottas said. "We are very open always about my performance, about the car performance.

"We haven't yet talked anything about next year, we think it's still a bit early." 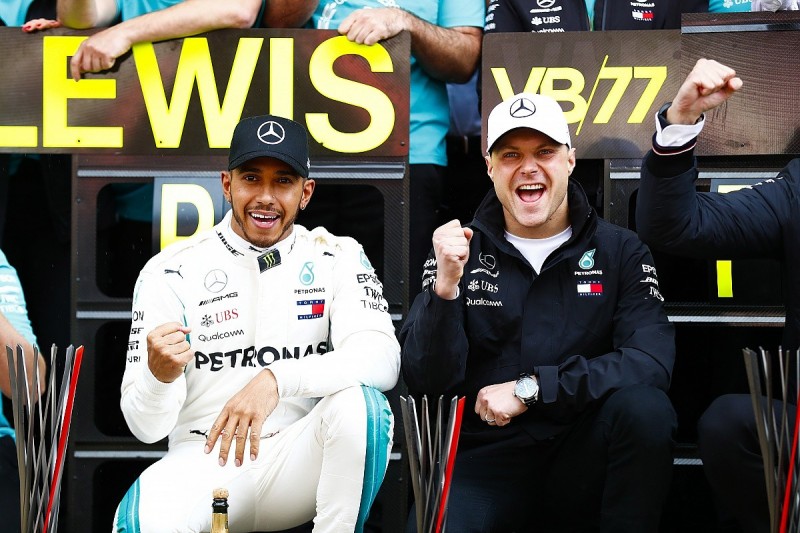 The team-mate dynamic at Mercedes is much more positive with Hamilton and Bottas than it was when Rosberg was driving for the team.

That fractious relationship led to high-profile on-track incidents, whereas Hamilton and Bottas have a much more harmonious partnership.

"It started off well but it's only got better as we got to know each other," said Bottas. "We have very good respect both ways.

"We are good team-mates. We want to help the team together and work together, but we also want to win.

"He is a pretty complete driver, I feel like I'm getting more and more complete all the time."

Bottas is third in the 2018 standings after five races, 37 points behind his championship-leading team-mate.

However, he would be almost level with Hamilton at the top had he not lost victory in Baku to a late puncture when he ran over debris while leading the race.

"It was, for a single race, maybe the biggest disappointment," said Bottas. "Leading three laps before the end and then that gets taken out of you, it's tough.

"Knowing how the championship table would have looked, it was hard, but I can't change it.

"Now I have this amount of points and that's what I need to work from."

Daniel Ricciardo suggests F1 should use hypersoft tyre at every GP