Kimi Raikkonen says he hates the situation he finds himself in with the handling of his Ferrari Formula 1 car at the moment, following a disappointing US Grand Prix

The 2007 world champion came home 13th and one lap down on race winner Lewis Hamilton at Austin on Sunday, as his race was marred by front-end problems that plagued him all weekend.

"Here was again one of the most difficult weekends," Raikkonen told reporters after the race.

"Japan was similar - we fight with understeer the whole weekend and whatever we do we can't seem to get rid of it.

"Then you can expect in the race to destroy the front tyres.

"Obviously I hate the situation the way it is and the way things are going, and I cannot solve it by myself."

Raikkonen added that the main frustration with his problems was that he and Ferrari have been unable to pinpoint what is causing them.

"To try to drive slowly in certain places didn't make any difference [to the life of the front tyres] so I don't understand it really," he said.

"Wherever we finished it's pretty disappointing. Not being able to solve certain issues is frustrating.

"Hopefully something comes up and we find what the issues are.

"I appreciate some help and obviously we try to help each other to fix these issues, but if we knew the issue it would be easier to solve."

The Finn said that team-mate Fernando Alonso - who finished sixth - is not as sensitive to the front-end difficulties with the 2014 Ferrari.

"In certain places, yes, it's the same issue, but I think he doesn't mind too much when the front is sliding," he said. 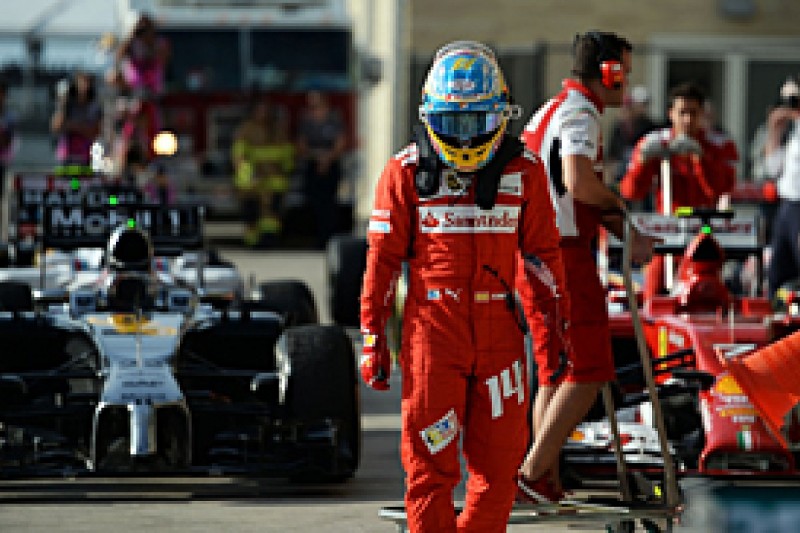 "So the effect is not so big then. It's a bit of a different story."

Alonso only just held onto sixth at the end of the race, beating Sebastian Vettel to the line by half a second after his car developed a serious vibration in the closing stages.

"I had huge vibrations on the tyres for the last two laps," said Alonso. "I could not even see the track, basically.

"I tried to control the pace. I was asking for the gap from behind to cross the line just in front of them.

"But then Vettel overtook [Kevin] Magnussen and there was no time to save any more so on the last lap I was flat out with huge vibrations."