MAT revealed arguably the most extreme and comprehensive F1 vision yet as it explored what the championship could become in 2050.

Though it went much further than simply its centrepiece concept car, the MCLExtreme, it was not the first time someone has got mileage out of such design freedom.

Some concepts have focused on performance, others on future-proofing F1 or readying it for short-term and medium-term change.

We will start with something that is not strictly a vision of F1's potential future, but did set the tone for contemporary concept cars. 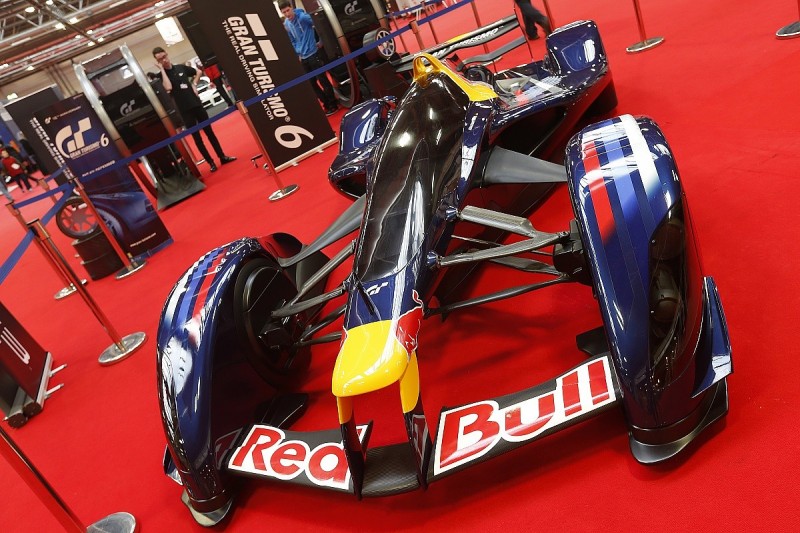 Linking up with Gran Turismo producer Kazunori Yamauchi, Adrian Newey was offered the chance to design "the fastest racing car on Earth" without the restriction of regulations.

The wheels are covered, with a long canopy and tight bodywork to minimise air resistance.

A gas turbine drives the car with almost 1500bhp, while Newey implemented a "fan" at the back of the car, akin to the Brabham BT46B, for added downforce. 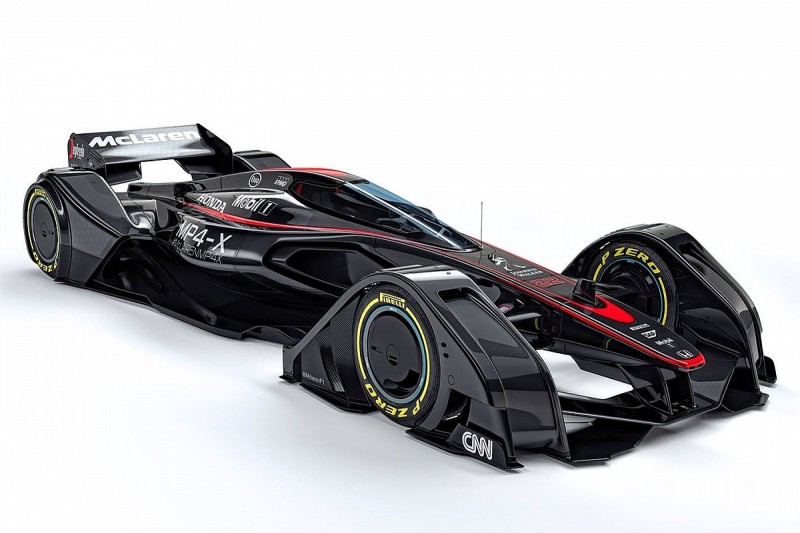 McLaren has delved into the world of imagination before, emerging from the back of a dismal 2015 F1 season with the MP4-X concept, a few months after Ferrari released a basic design of a car to show how simple it would be to make sweeping design changes.

It is not certain whether the McLaren designers had a time-frame in mind in its development, but perhaps they came up with the MP4-X as an idealistic vision of what F1's future should be like.

Unlike the MCLE, it is built around an internal combustion engine, but with "super-efficient fuels" to improve the powertrain's thermal efficiency.

A canopy and wheel covers improve the aerodynamics, as the car pairs hybrid technology with solar panels on top of the sidepods.

There is also active aerodynamics, paired with a "complex digital billboard", targeting adverts specifically to each viewer.

McLaren gave the MP4-X a facelift last year, sprucing it up to match its 2018 livery. 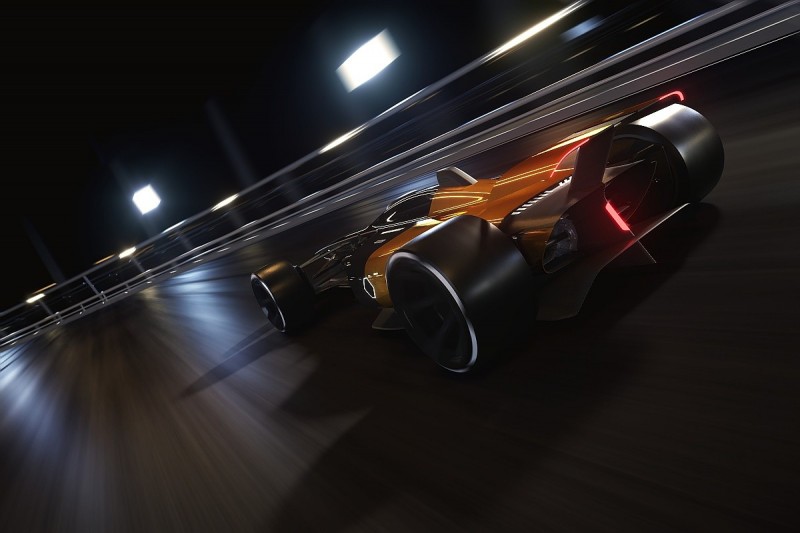 Developed with the 2027 season in mind, Renault proposed a dramatic concept car with refreshingly clean lines and pared-back appearance - offering a design with less reliance on aerodynamics.

The car contains active suspension, allowing engineers to pre-program the reaction of the car in response to movement and track surface, and active aerodynamics.

Like the previous pair of concepts, it's also got a canopy, and the driver is contained in an almost transparent safety cell to showcase them to the crowds in attendance.

The powertrain is based on current developments, but is augmented with two 250kW recovery systems to bring the power up to almost 1300bhp. 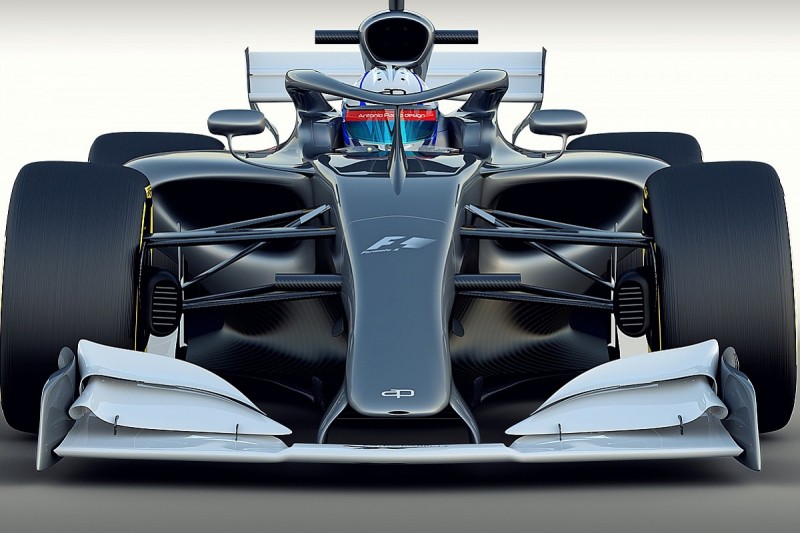 After being taken over by Liberty Media, F1 has taken a much more proactive approach to shaping its own future - and some of its findings projected for 2021 have already found their way into the '19 machines.

F1 unveiled three different concepts suggested for the 2021 season, in which it is due to undergo a dramatic overhaul.

All three feature just three elements in more simplified front wings, while the bodywork is sculpted and shapely.

The halo is noticeably retained, and the third concept features a range of flow conditioners to manage the tyre wake behind the wheels.

Although the 2021 rules are still being worked on, the 18-inch wheels seen are already confirmed for that season. 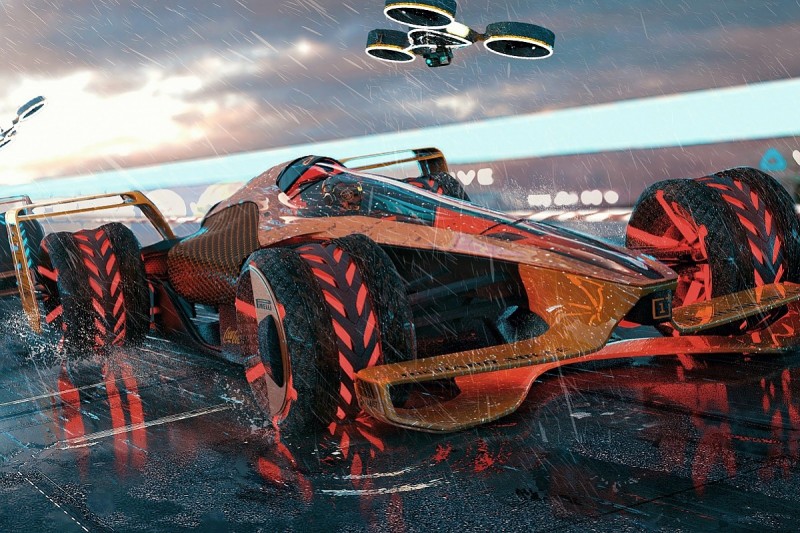 A 500km/h (310mph) rear-wheel drive electric car powered by a "foldable battery", with "shape-shifting" aero and car technology that would include an onboard AI co-pilot and "self-healing tyres" was just the headline of this wide-ranging look at F1's future.

It sounds bonkers, and it is, but McLaren Applied Technologies' in-depth look at what car, driver, tracks and fan experiences could evolve into was rooted in plenty of science, not just fantasy.

Its idea for a futuristic race circuits include steeply banked corners, pitlanes with the capacity for battery charging and circuits that can adapt to extreme weather and have "black-out-zones with no communication or AI assistance for the driver".