Hamilton defeated team-mate Valtteri Bottas by more than 20 seconds after a surprise second stop under a virtual safety car for Sebastian Vettel dropped Ferrari off the podium.

In Vettel's place came Max Verstappen, who fended off the Ferrari despite a damaged front wing to score his first rostrum of the year.

Vettel jumped Bottas into Turn 1 to slot into second at the start before the race was immediately neutralised under a safety car for a multi-car crash at Turn 3.

Romain Grosjean had nipped ahead of Carlos Sainz Jr and Fernando Alonso after those two ran deep into Turn 2, but then overreacted to a wobble from Haas team-mate Kevin Magnussen ahead of him and ran wide on the entry to Turn 3.

He lost the rear but seemed to keep the throttle planted, which lit up the rear tyres, spun him back across the track and meant he was collected by Nico Hulkenberg's Renault and Pierre Gasly's Toro Rosso. 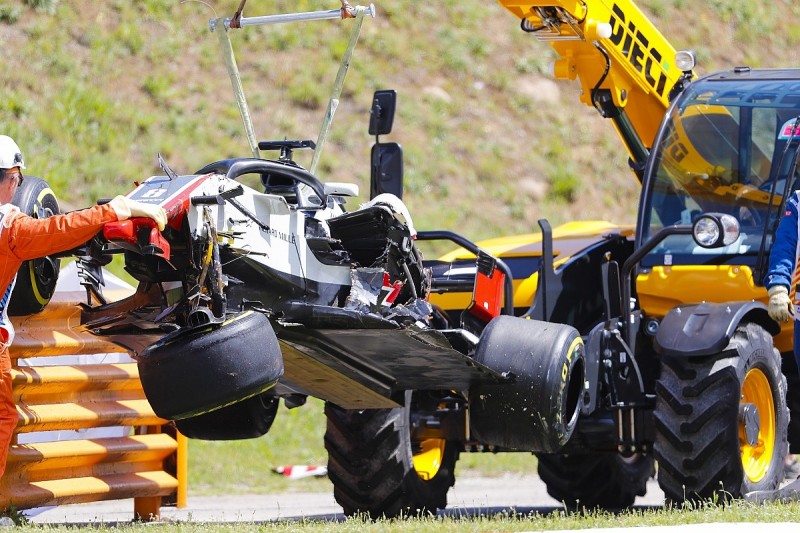 All three retired on the spot and a lengthy clean-up operation began, before racing resumed on lap seven of 66.

Hamilton bolted clear at the restart, comfortably stretching his advantage to more than seven seconds over the next 10 laps, until Vettel stopped.

A slow out-lap as Vettel struggled to get an immediate hit on his fresh medium tyres, combined with Bottas pumping in outright best sector times, looked to have handed second place to Mercedes.

But Bottas suffered a slow pitstop, losing 1.4s to Vettel, and emerged just behind.

The procession was interrupted on lap 25 by the first of two incidents involving Ferrari.

First, Kimi Raikkonen slowed from fourth position and coaxed his car back into the pits to retire - the Finn had taken a new engine after Friday practice.

The second came 15 laps later, when Esteban Ocon's smoking, parked Force India sparked a virtual safety car and Ferrari reacted by pitting Vettel and putting him on a two-stop strategy as the other frontrunners stuck to a one-stop.

That ceded track position to Bottas and Verstappen, but kept Vettel ahead of Daniel Ricciardo.

Vettel, with fresh medium tyres, started to catch Verstappen as the Dutchman battled with a front wing missing the left endplate, which he broke clipping a Williams at the VSC restart.

But Verstappen just kept clear of Vettel to score his first podium of the season behind the Mercedes one-two.

Ricciardo slipped back to a lonely fifth in the second Red Bull. A spin at the VSC restart dropped him away from Verstappen, though he responded with the fastest lap near the end.

Kevin Magnussen produced a faultless drive to claim sixth and best-of-the-rest honours for Haas, while Carlos Sainz Jr survived a fuel problem in the closing stages to finish seventh.

Fernando Alonso was eighth for McLaren, having lost ground in the first-lap mess, ahead of Sergio Perez's Force India.

Both Alonso and Perez overtook Sauber Charles Leclerc in the closing stages, but the rookie still earned his second points finish in a row with 10th.