Both drivers were given a reprimand for their actions after the race - with Webber punished for going onto the track, while Alonso was dealt with for causing a dangerous situation.

For Webber the reprimand proved costly as, because it was his third of the season, it means he will have a 10-place grid penalty for the Korean Grand Prix.

Horner thinks that it was harsh of the stewards to hand down such a penalty and that a fine would have been better considering the consequences of the reprimand.

"It should have been dealt with by a fine or a slap on the wrist," said Horner, when asked by AUTOSPORT for his reaction to the matter.

"Some of the most iconic images I can remember are of Nigel Mansell giving Ayrton Senna a lift home [at the 1991 British Grand Prix - pictured below].

"It is a shame and frustrating because that puts Mark now on the back foot now in Korea. It is what it is and we certainly can't change it."

FALLING FOUL OF THE SYSTEM

Horner thinks that Webber has had the misfortune to fall foul of the totting-up process under circumstances that were not the original intention of the rule. 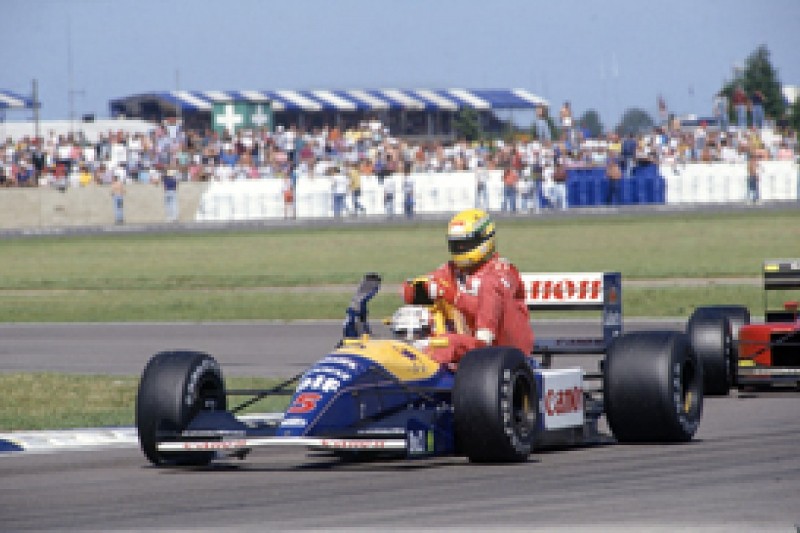 "The problem is that as soon as you start applying common sense that is where you get into trouble," he added.

"In fairness I haven't seen the footage but I saw the image of him giving Mark a lift back, and at the end of the day it was good for the show, good TV, and if drivers can't show any emotion it is a shame.

"We have seen things go through before. Fernando picked up a flag in Valencia after he won [in 2012], and there was no penalty for that despite it being a breach of the rules.

"Common sense prevailed on that day. But I understand the difficulty the stewards have with the tools they have at their disposal."