Singapore GP: Hamilton takes pole ahead of Verstappen and Vettel

The F1 world championship leader - whose Mercedes team had been expected to trail Ferrari in Singapore - set a best time of 1m36.015s on his first run in Q3, with engineer Pete Bonnington telling him "that was an epic lap" after crossing the line.

Hamilton abandoned his lap on his second run in the middle sector after running wide out of the Turn 7 right-hander, but had done enough to secure pole by 0.319 seconds from Red Bull driver Max Verstappen.

Verstappen was on a lap that was close to Hamilton's time after two sectors on his second run, but a slow final sector put paid to his chances of taking pole position.

Verstappen said "this feels like a victory" after struggling throughout the Singapore weekend so far with engine complaints.

Sebastian Vettel also failed to improve on his second run, ending up 0.613s down in third place and less than a tenth ahead of the second Mercedes of Valtteri Bottas.

Kimi Raikkonen was fifth for Ferrari, two tenths ahead of the second Red Bull of Daniel Ricciardo.

Both Mercedes and Ferrari had got away with tyre tactics scares early in qualifying.

Mercedes stuck with ultrasofts in Q1, and in a scrappy session only just made it through with Bottas in 12th and Hamilton in 14th.

Ferrari then tried to get through Q2 on ultrasofts, but had to abandon that plan for the second runs as it quickly became clear they would not reach the top 10 o the slower tyre. 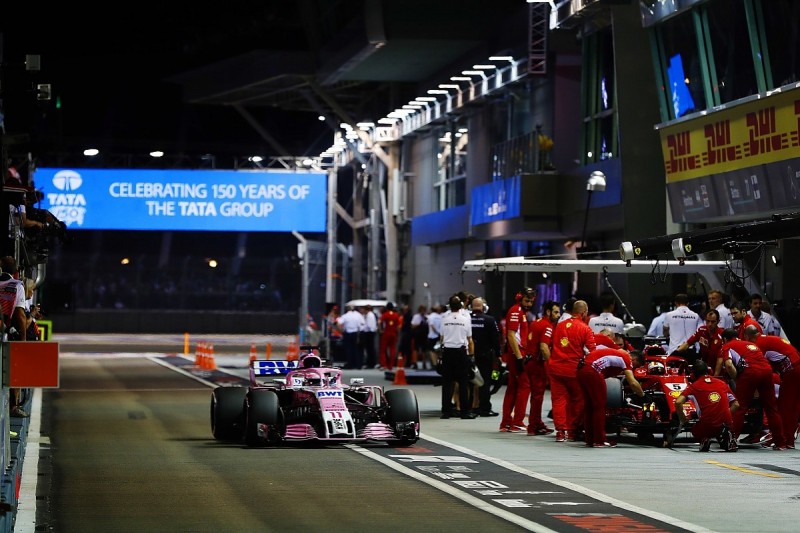 Sergio Perez was seventh, a second slower than Ricciardo, for Force India ahead of Romain Grosjean's Haas.

Perez's Force India team-mate Esteban Ocon survived a brush with the wall at the exit of Turn 21 to claim ninth place ahead of Renault's Nico Hulkenberg.

McLaren's Fernando Alonso was bumped out of the top 10 by Grosjean's late improvement, leaving him 11th and fastest of those eliminated in Q2.

He missed out on a place in the top 10 shootout by just 0.107s having outpaced Renault driver Carlos Sainz Jr, who failed to improve his time on his second run and complained of "absolutely no grip".

Sauber pairing Charles Leclerc and Marcus Ericsson were 13th and 14th, albeit with seven tenths separating the duo.

Kevin Magnussen was the quickest to be eliminated in Q1 in 16th place after failing to improve on his second run and being shuffled into the drop zone by Ericsson.

Toro Rosso driver Brendon Hartley was 17th, lapping two tenths off team-mate Gasly but half a tenth ahead of McLaren's Stoffel Vandoorne.

Williams pairing Sergey Sirotkin and Lance Stroll were a distant 19th and 20th, lapping 1.4s off the rest of the field.

Formula 1 2021 cars 'will look nothing like' concepts - Force India