Sergio Perez has labelled the 2014 Formula 1 spectacle as 'boring', citing a lack of overtaking and drivers being unable to push to the maximum

Ahead of talks between Ferrari, Bernie Ecclestone and the FIA at the Bahrain Grand Prix to discuss concerns about the current spectacle, Perez has backed those questioning the new rules.

Having finished the first race in Australia and watched Malaysia from the sidelines after failing to make the start, Perez has been able to assess F1 2014 from both inside and outside the cockpit.

"Malaysia, normally, if it doesn't rain, there is a lot of degradation with tyres, and issues with cooling, so it is difficult to follow the cars.

"But here [Bahrain] hopefully we can see a good race. Generally we have good racing here, and people are learning more about the cars. Hopefully for the fans and the good of F1, we can have a good show here."

DOWNFORCE A BIG FACTOR IN PROBLEM

Perez thinks it is wrong to single out the new fuel-efficient engines as a cause of the lack of action this year, for he thinks the ultimate cause is a dramatic reduction in downforce for 2014.

That has led to an increase in tyre degradation, which drivers are having to manage by driving under the limit of full car performance. 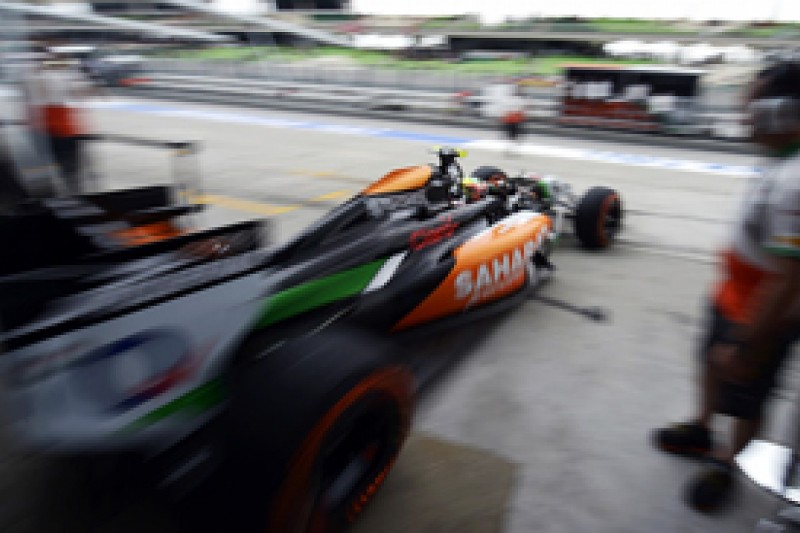 "Although Pirelli is bringing really, really hard compounds, the degradation is not really improving because you are sliding and you are degrading as much as if it was a soft compound," explained the Force India driver. "So to follow a car is difficult.

"With the lack of downforce it is difficult, so you have to be on a different strategy to have a good move."

Although trickier cars do make mistakes more likely, Perez thinks that being able to seize on such moments is harder because cars cannot follow each other so closely.

"Obviously it is easier to do a mistake, but the problem is that if you degrade the tyres by sliding more and following a car, you lose a lot of downforce.

"So that makes things harder for us to attack someone who is on a similar pace to you."