As Vettel, the fast-starting Verstappen and Valtteri Bottas's Mercedes went side by side into Turn 1, the Ferrari damaged its front wing against the Red Bull's right-rear wheel.

That prompted a stop for repairs, after which Vettel recovered from 18th to fourth.

Asked if he felt Verstappen had been over-optimistic, Vettel replied: "I haven't seen from his point of view, but obviously I wasn't expecting it.

"I was focusing on Valtteri. I didn't really have anywhere to go because Lewis [Hamilton] was in front, so if I brake later, then I run into Lewis.

"And then Max took his chance on the outside and ran over our front wing.

"I don't think he did it on purpose because normally you get a puncture, so in that regard he was lucky that he didn't get one."

Vettel regretted that he and the team did not realise the extent of the front wing damage right away and missed the chance to change it under the safety car for Carlos Sainz Jr and Felipe Massa's crash.

"The first lap of the race usually is quite messy because the tyres are cold, especially today as it was windy," said Vettel.

"I felt something out of Turn 6/7, and then there was a safety car.

"I asked to check and then behind the safety car it was so slow that you couldn't really feel the damage.

"We should have spotted [the damage] and got a free pitstop." 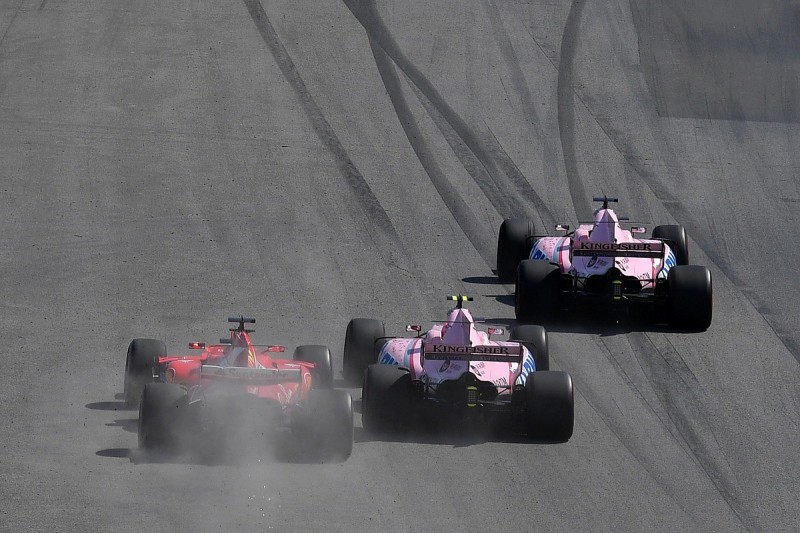 Vettel's recovery drive eventually brought him up to a fight featuring Daniel Ricciardo's Red Bull and the Force Indias of Sergio Perez and Esteban Ocon for the final podium place.

He made a second stop for ultra-softs to take another shot at the group, and dispatched Esteban Ocon with a Turn 1 dive with five laps to go after the two Force Indias went wheel-to-wheel at the final chicane.

"I just committed halfway down the straight and said 'I go down the inside no matter what,'" Vettel recalled.

"And Esteban had a bit of a wobble and I reacted to that. It was really slippery on the inside."

Vettel nearly handed the position back with an error on the next lap, but ultimately eased past Sergio Perez for fourth and finished just 0.6 seconds behind third-placed Ricciardo.

"I picked up a lot of dirt [in the Ocon move] and I lost a little bit too much time on that lap because I thought I could go straight to move onto Sergio," Vettel said.

"But then I nearly went into the wall in Turn 4, because I slid and lost the rear, so I had to back off.

"Then I nearly lost it fighting back, I was late [braking] into Turn 8.

"I think [a podium] was there but we lost a bit too much time fighting through the Force Indias."