Raikkonen's second place finishes to Vettel in the Monaco and Hungarian Grands Prix in particular have led to suggestions that Ferrari is favouring its lead driver, but Vettel does not see it that way.

"I am a bit surprised by the way things are put," said Vettel.

"I can't speak for other people, but Kimi and myself were racing each other the whole year.

"I read or heard after Hungarian GP that he was protecting me. If you speak to him, he'll make it pretty clear.

"I don't think he was leaving anything behind, if he had opportunity properly to pass me he would have tried, and that is fair enough.

"It would have been same the other way around - we're racing for the team, we're both trying to do our best.

"I don't know what other teams are doing, but for us we both go flat out, and then see what happens."

Asked if he was now more mindful of points than race wins, he was adamant that he had tried all he could to pass championship rival Lewis Hamilton for victory at Spa.

"Obviously you need to be aware of what you are doing, but it wasn't like I was saving myself," he added. 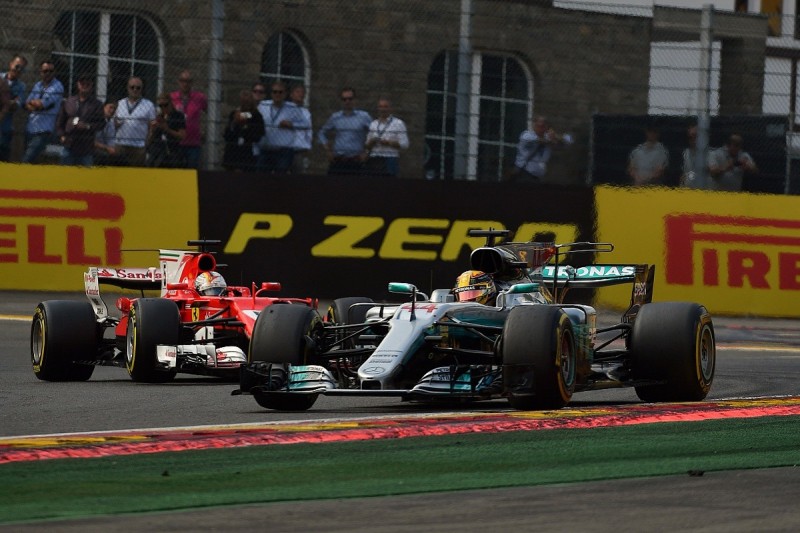 "I tried everything I had at the time. I stuck with him the whole race, maybe not wheel-to-wheel, but it was really close and intense from driving point of view.

"I enjoyed that a lot, but he had the upper hand in the end, so there can only be one on the top step of podium."

Vettel also said he and Ferrari had taken lessons from his chase of Hamilton last Sunday, coming into this weekend's Italian GP at Monza.

"There are some things that I learned from Spa, we learned as a team, things that maybe I would do a bit different," he said.

"At the time it felt like the right thing to do, with hindsight it was [possible to be] a bit more clever.

"Going into this weekend we need to be fair and say this track suits Mercedes, but the performance last week gives us hope, so we'll try to do the best.

"I think the form we showed in Spa was real, and the speed was there in particular in the race, which weeks ago on a similar type of track [Silverstone], maybe wasn't the case. So that's very positive.

"We had a smoother weekend all around, but still I think we've made improvements on all fronts, so I was very, very happy with the performance last week."