Sainz lost control in the middle part of the Ascari chicane and had a heavy head-on impact with a single-layer tyre barrier on the left-hand side of the track, which wiped the nose off his Ferrari and damaged its front suspension.

It was the Spaniard's second crash in two weekends, after he shunted out of FP3 at Zandvoort's banked Turn 3.

The car was repaired in time for the 18-lap sprint race, where Sainz finished one place behind team-mate Charles Leclerc in seventh.

Speaking about the “pretty heavy impact” after the sprint, he explained that he was “scared that the chassis was going to be damaged” which caused his confidence to dip.

“Honestly, the confidence was not very high after the crash, I lost the car in such a weird manner and in such an unexpected way when I wasn't even pushing that the confidence takes quite a big hit,” he said.

Asked by Autosport if the team had been able to provide any answers as to why he suddenly lost control, Sainz stressed that it remained a mystery.

“It is very difficult to spot anything on data, and to honestly explain it myself,” he said.

“It's one of those strange ones that I will probably look back on it the rest of my life thinking, 'What what happened there?' 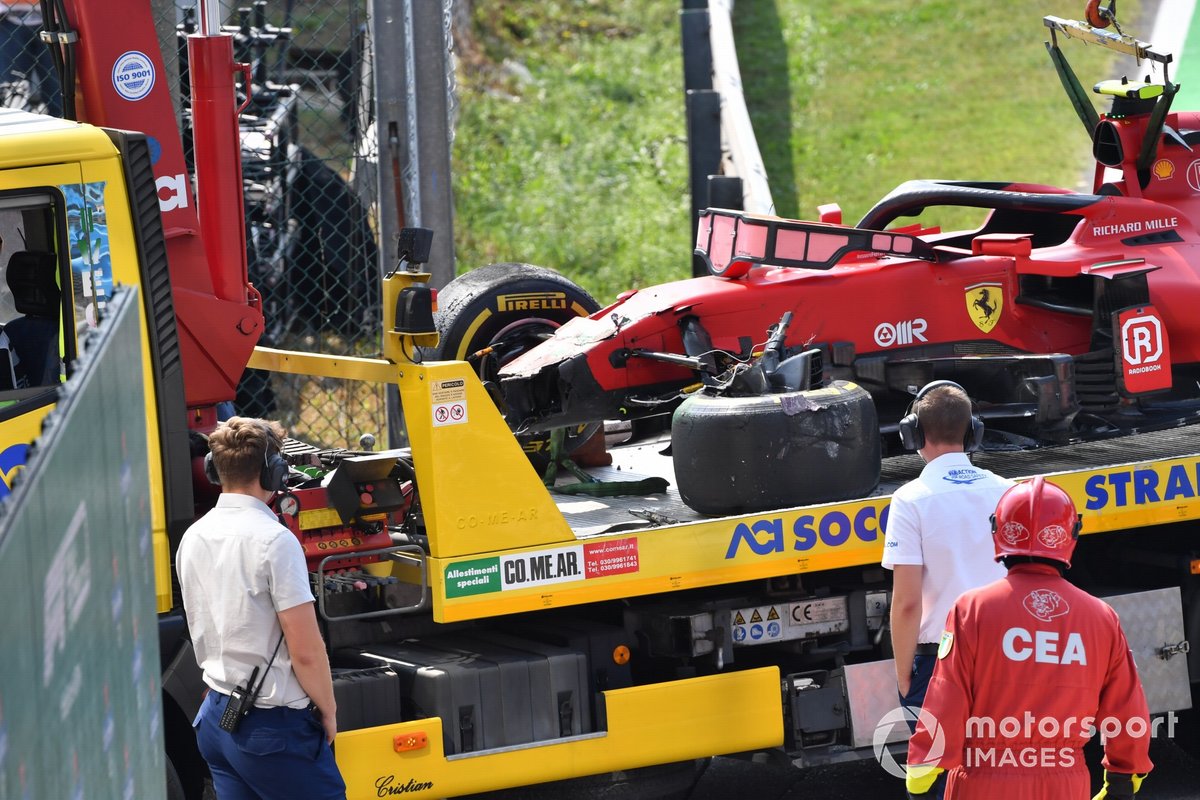 Marshals with the car of Carlos Sainz Jr., Ferrari SF21

“It's a weird thing, it's not the first time that happens with this car with myself, I've lost this car at the rear a couple of times. So there must be probably something going on that I'm not entirely feeling underneath me.

“But I'm still pushing hard, I'm still trying to be quick, and the race definitely helped me to rebuild a bit that confidence to try and understand what's what's going on.

“But in Turn 8, Turn 9, Turn 10 [the Ascari chicane complex] I was very weak in the race, and I could feel that that I don't have the car fully underneath me yet there.”

Sainz added that his crash occurred in a place where he wouldn’t usually expect to go off and had prompted him to question whether he needs to change his driving style “to maybe protect myself a bit from that”.

“I've never never had a moment there, and I never really crashed there or anything, so a strange one,” he said.

“I've been struggling honestly there the whole weekend in that corner with the rear, but you never expect to lose it in the middle of the corner the way I did it.

“So [it's] something to understand, something especially for me to look into and see if I can keep understanding the car at the rear, try to feel the rear axle a bit better in the mid-corner. Because as I said, it's not the first time that it happens.

“It's a fine edge on this car, the rear is sometimes a bit loose in the mid-corner and this is where I've lost the car pretty much in the last few times.

“I feel like I can push it hard on entries. But the mid-corner is something that it has caught me by surprise and that I need to look into.”