As cars rushed to the pits during an early race virtual safety car period caused by Sergio Perez's Racing Point coming to a halt at the side of the track, Sainz appeared to slow before the entry.

His speed drop looked like it held up Racing Point's Lance Stroll behind him, and could have been a tactic to avoid being delayed too much at a double stacked McLaren pitstop.

After his actions were reported to the stewards, Sainz and Stroll were both summoned to a post-race investigation.

However, with Sainz having had no team instruction to slow down, there was also no evidence from car data that showed he had done anything out of the ordinary.

Telemetry data showed that he had braked briefly to less than the 80km/h speed limit prior to the pitlane entry line, before accelerating back up to the limit.

Other drivers, including Sebastian Vettel, had done exactly the same.

Sainz was judged to have been at 80km/h for all but approximately five seconds in the pitlane phase, and this meant he arrived at his box just 0.6s later than he could have done had he maintained full speed.

A statement from the stewards said: "We are not of the view that this action in any way resulted in the team avoiding a 'double stack' situation as Car 55 (Sainz) was well clear of the pitstop at this time.

"We also accept the explanation of the driver of Car 55 that he was exercising a degree of caution as video evidence confirms the presence of a lot of other teams' personnel in the pitlane at the time.

"Car 18 (Stroll) was able to maintain a speed of 80 km/h in the pitlane except for a very short period of time (approximately 1 second) and therefore we do not consider that it was materially impacted by the actions of the driver of Car 55.

"We also checked the relative speeds of the cars after leaving their pitstops and can see no evidence of Car 55 driving unnecessarily slowly." 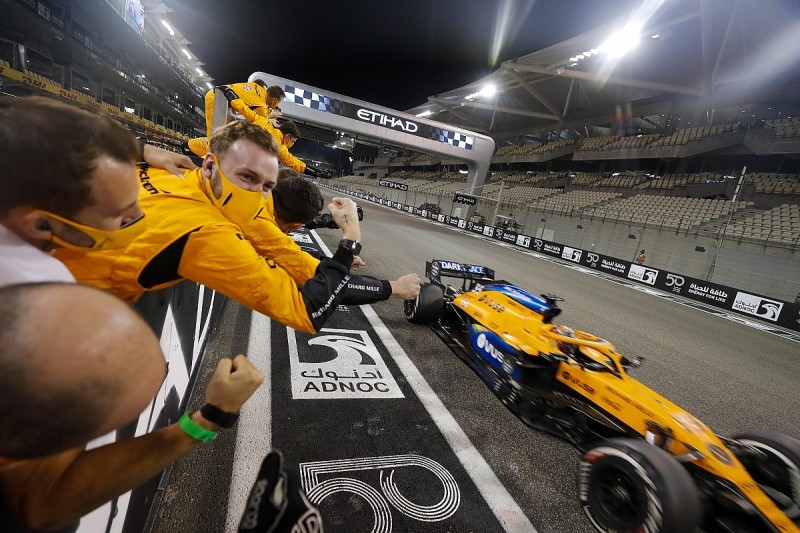 With McLaren locked in a tight fight with Racing Point for third place in the constructors' championship, a Sainz penalty could have had a big impact in the outcome.

As Sainz finished sixth, one place behind team-mate Lando Norris, McLaren was able to usurp Racing Point and secure third position in the constructors' standings by seven points.

Sainz was surprised the alleged incident was investigated by the stewards.

"I don't know why even there's a discussion," he said.

"I think the only thing I did was to be very cautious in the pitlane and I think we executed a perfect race and we managed to bring home P3 in the championship, which is great for the team."

Team principal Andreas Seidl said he was never too worried about the situation as he always felt that Sainz had done nothing wrong.

"Obviously you need to figure in potential penalties, but with the gap all the time to Daniel [Ricciardo] it was never really something that worried us," he said. "And from our point of view, it doesn't deserve any penalty."

How the cocktail for F1's superteams became outdated