George Russell called his Emilia Romagna Grand Prix crash behind the safety car, which cost him a chance at his first Formula 1 points, "the biggest mistake I've ever made"

Williams driver Russell was sat 11th overall prior to a safety car being called following a tyre failure for Max Verstappen, with the incident promoting Russell into 10th place.

But before the British driver could have any thoughts about scoring the first point of his F1 career, a mistake while running behind the safety car saw him spin into the wall approaching Acque Minerali and crash out of the race.

"I was pushing like hell from the start to finish, and under the safety car I was just giving it absolutely everything to keep the tyres in and really trying to find the limit," Russell explained.

"There's absolutely no excuses. I hit a small bump as I changed gear and I was already in the wall before I could save it. It's just absolutely gutting."

Russell has come close to scoring his first F1 point on a number of occasions since making his debut in 2019, making the mistake more painful as he does not know when he will get another chance.

"It's probably the biggest mistake I've ever made in my career," Russell said.

"You're kicking yourself even more because previously in junior series, if I were to make a mistake and say lose a race or lose a victory, you know that you go the next one and you are in that position again. 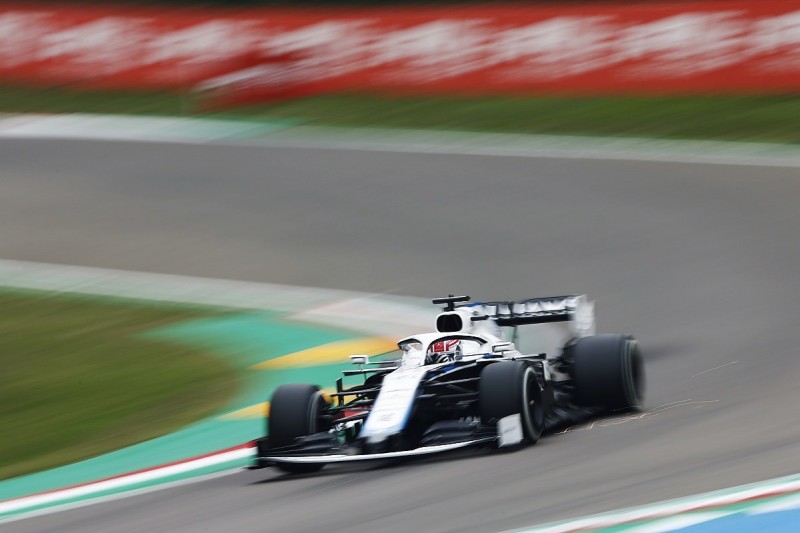 "We weren't leaving absolutely anything on the table. Unfortunately that was the reason that got us there in the first place, but equally the reason why it ended how it did."

Russell was seen sitting by the side of the track after getting out of his car with his helmet still on, and took several minutes before getting up and returning to the paddock.

"It was almost disbelief, in all honesty," Russell said when asked what was going through this mind at that moment.

"It was such an amateur mistake that I almost just could not believe it just happened. It was just pure frustration and annoyance at the error I just made.

"I've been through difficult times in my career before. A mistake like this is very strange, because it was such a school boy error.

"We've got a lot to be positive and pleased about with this weekend. I think we were incredibly fast, relatively.

"But ultimately, I've definitely learned from this experience. These cars are brutal and can definitely go at you at any moment, especially in these cold conditions on very worn tyres."