Rookie Russell, who starts his British Grand Prix debut this weekend, was one of several drivers to have an off-track excursion during free practice one when he was caught out by the blustery conditions, which changed from lap to lap.

The Williams driver ended up running across the grass after catching the wind on the exit of the left-hander at Brooklands, before spinning across in the opposite direction,

"It was horrible out there," said Russell.

"The problem is not the wind itself, it's just when it's gusting, it's inconsistent, lap after lap, corner after corner, you just don't know what's going to happen. It's caught quite a few drivers out.

"These cars are so sensitive to the wind, and it's just frustrating.

"It's like when I spun off this morning, and [the same for] other guys, you're just doing something normal and suddenly you just lose all the grip and spin off and make yourself look like an idiot.

"I don't like excuses, it should be better than that, it's just annoying as a driver corner after corner you don't know exactly what's going to happen, but it's part of the job." 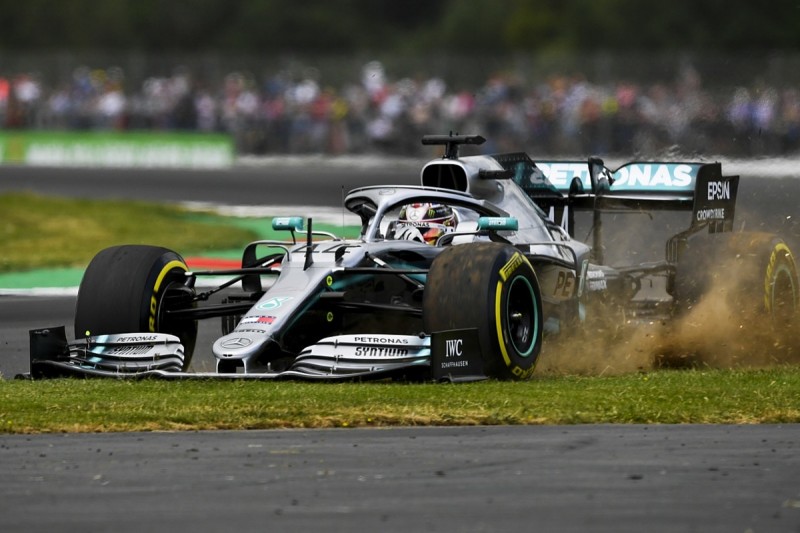 Russell's team-mate Robert Kubica said that the conditions were made even harder for the Williams drivers because of a general lack of grip in the car but several other drivers in the field also said that they had noticed the changing conditions.

"It's been quite windy, quite gusty out there, so it hasn't been the easiest of days," said Lewis Hamilton.

"The asphalt is very smooth which makes it tricky to get the tyres to work, they're in and out of the window, and the gusty winds didn't make it easy. I was struggling with the rear end and went off a few times."

"It's always tricky around here when the wind picks up," added Nico Hulkenberg.

"And that was one of the things on the low fuel run in the afternoon. I felt it was very gusty, and I think I had a particularly bad lap and I felt like I was getting pushed around in the car, even on the straights."

Haas's Romain Grosjean said that his day was made even harder by the decision to go back to the aerodynamic specification last used in the opening round of the season at Melbourne, which the team had identified as more sensitive to wind that the newer set-up used by Kevin Magnussen.

"We knew the upgrade we brought in Barcelona was a very good step for the wind sensitivity," said Grosjean.

"It's something we were quite weak at. Today I can feel the same thing we were feeling in Bahrain and China when it was windy in terms of performance.

"The feeling in the car when it's not windy is really good, I have a better feeling than with the new package. But the performance is a bit down."