The team raised eyebrows at the first test when its RS14 emerged with a unique angled exhaust configuration, clearly aimed to directing gases onto the rear wing.

While exhaust rule limitations since 2014 plus a ban on monkey seats for '18 were aimed at deterring teams from pursuing blown wing opportunities, Renault clearly believes that raising its exhaust exit produces a performance benefit.

It has angled the tailpipe at the maximum five degrees that is allowed in the regulations, and the upward tilt is exaggerated by the placement of the wastegate exhausts underneath.

Renault's determination to get this area of the car working perfectly has become clear this week, with extra heat protection added to the rear wing main plane to ensure it is not damaged by the 400-degree centigrade gasses aimed at it.

Having run last week with temperature pads to monitor what was going on, Renault's added carbon ceramica material for test two looks like being a permanent solution.

Renault technical director Bob Bell has confessed that the team has deliberately angled its exhaust as high as it can to maximise the potential for a performance boost.

"It's no secret there is some benefit from the exhaust flows around the rear wing," he said.

"We've chosen to push our exhaust up as high as you legally can to try to maximise the benefit.

"Different manufacturers have different solutions to that. It's a small gain. It's not where it was four or five years ago with blown diffusers by any means, it's nowhere near there, but it's still a useful benefit."

As well as getting the rear wing protection sorted, Bell has also suggested that effort will be put into getting engine modes created to help keep the flow of gases more constant rather than only being when the driver is on-throttle.

"We're a works team, Viry and Enstone are closely knitted, so on issues like that that involve an element of power unit performance and chassis performance we work very closely to get the best out of it," he said.

"We're working closely with them and we do whatever we can do within the regulations to maximise that."

Renault's customer teams McLaren and Red Bull have not angled their rear exhausts as high as the works team, but Bell would not be surprised if rivals pursue similar ideas soon.

When asked if he expected others to copy, he said: "It's not hard at all. You only have to look at where the exhaust is and change a few numbers on drawings and you can shove it up." 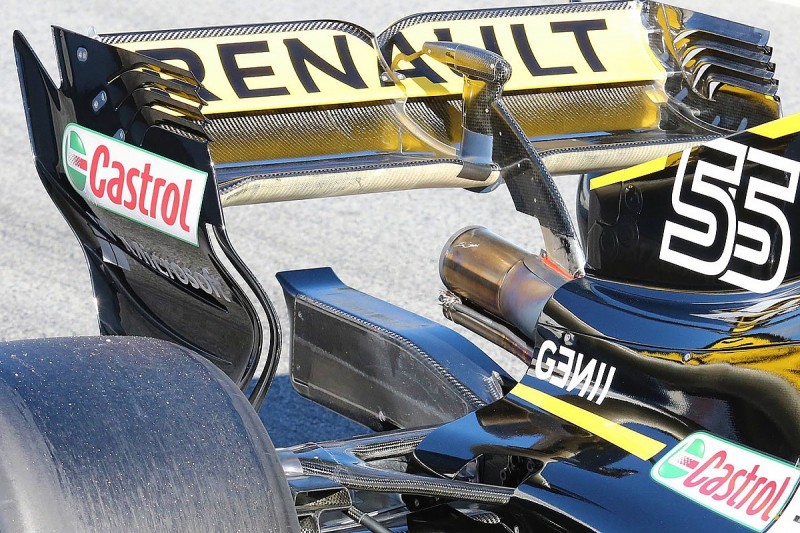 Exhaust-blown aerodynamic components are nothing new. As I always say, you should never forget what you have learned.

Any time you have reasonably high-speed airflow at your disposal, you can do something with it. In the past, the exhaust exits were placed directly in the diffuser, improving the diffuser performance. That was then banned.

Then we had the Coanda effect, where placing the exhaust exit correctly on the sidepod surface would mean the high-speed exhaust gases would track along the body surface and again assist the diffuser performance.

For the V6 turbo era, the exhaust exit size and position was defined in the regulations, meaning it was more or less in the middle of nowhere and had very little effect other than to help energise the airflow on what was called the saddle wing. This is a small aerodynamic section placed just above the exhaust exit. This in turn then helped the performance of the rear wing.

For 2018, regulation changes meant the saddle wing was eliminated and in regulation 5.8 the exhaust exit location was tightened up with the intention of eliminating any potential of exhaust blowing on the rear wing.

As you can see from Renault's efforts, it has the exhaust exit as high as possible and it is angled up at five degrees, which is again the maximum. There is still a little to be had from this higher airspeed as it leaves the exhaust and wastegate exits. The effect will be small, but it will be something.

The negatives are the heat on the rear wing surfaces, but with modern carbonfibre resin technologies this shouldn't be a problem.

Also, the fact that at the end of the straight you are shutting the throttle, which reduces the flow at the same time as you are closing the DRS, means that you could just have some rear wing airflow reattachment problems entering the braking area.

When I was watching trackside, I didn't see any real problems with this but it could be a different matter when the ambient temperatures increase.