Red Bull is adamant it is not alone in pushing Formula 1's flexible wing rules to the limit, despite being the only team punished at the Abu Dhabi Grand Prix

The cars of Sebastian Vettel and Daniel Ricciardo were forced to start from the pitlane at Yas Marina after the FIA discovered a trick design that allowed the front wing flaps to flex at high speed.

Detailed investigations by the governing body discovered a hidden flexible spring device inside the pod connection between the main plane and the flaps.

Although other teams were investigated for flexible wings in Abu Dhabi, and it is understood Force India had to switch to an alternative design after Friday practice to ensure it did not risk breaking the rules, Red Bull was the only one found to be illegal.

Red Bull suggested that it had been unfairly singled out because video footage of other teams - including Williams - had also indicated wings flexing.

When asked by AUTOSPORT to clarify this stance as others had been found legal, Red Bull team principal Christian Horner said: "It is about the type of test.

"You can see very clearly all of the teams' wings are moving, some more than others.

"We have taken things to the extreme in a particular area. They [the FIA] are focusing on one element of the front wing, which is the upper element, whereas others are taking advantage of other areas.

"But that was a decision of the stewards and the scrutineers, so we have to take it on the chin.

"F1 is all about pushing to the boundaries and we went a step too far."

Red Bull had to run a revised wing in the race, which featured a solid stay between the plane and the wing flaps, but its cars still managed to charge through the field.

Horner added: "As you can see it had very little effect on performance, so the important thing is to learn from it.

"But rest assured we are not alone in trying to get the most out of aerodynamics around the front wing area."

Red Bull has employed a unique wing adjuster format since 2013, using a pod-shaped mechanism mounted above the wing on a short metal support. 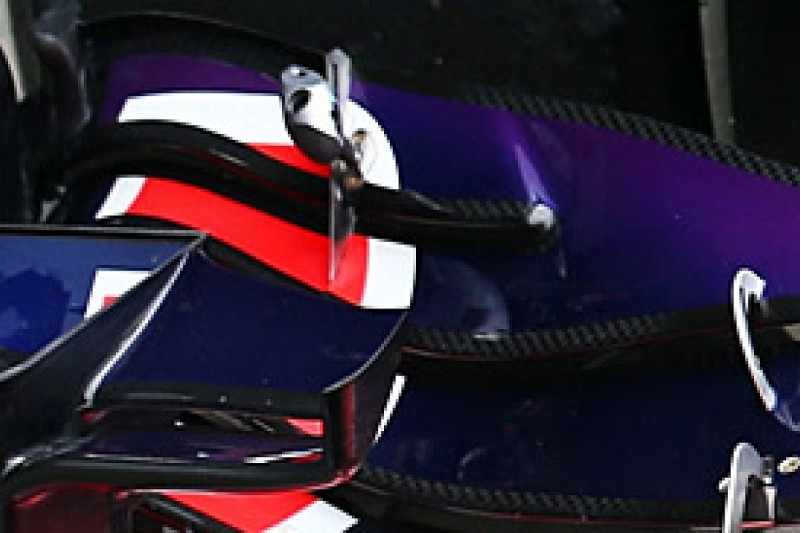 The screw adjuster that alters the front flap angle then emerges from below this pod to mount to the wing underneath.

The Abu Dhabi inspection found that the cover surrounding this pod is flexible, although outwardly it appears to be a rigid part of the wing assembly. Somehow the flap below can deflect when subjected to a vertical load and the pod above deforms to allow this movement.

It is possible that the adjuster pod and its cover conceals a sprung mechanism, which allows the flap to be adjusted, but still deform above a certain loading.

As other teams use a simple threaded rod between the adjuster and the wing, Red Bull's method of adding a spring between the two would appear to be in clear contravention of technical regulation 3.15.

This demands bodywork must be rigidly secured to the car (not having any degree of freedom) and must remain immobile in relation to the sprung part of the car.

Despite the shape of adjuster having been in place since 2013, the pod was painted and outwardly appeared to be a solid metal part. Only since the Chinese Grand Prix this year has the part changed to what appeared to be a metal and rubber construction.

With other teams under scrutiny in Abu Dhabi it was pure bodywork flexibility attracting stewards' attention rather than overtly sprung mechanisms.