Verstappen shadowed third-placed Valtteri Bottas in the early stages in Monaco, and Red Bull opted to try to leapfrog the Mercedes driver by pitting before him.

Mercedes pitted Bottas on the very next lap and the positions were unchanged, with both drivers then overhauled by Verstappen's team-mate Daniel Ricciardo, who stayed out for another five laps and ultimately finished third.

Verstappen vented his frustration on team radio, and made it clear to Dutch television post-race that he was "incredibly disappointed" with what happened.

Team boss Christian Horner explained that Sergio Perez's pace on super-softs, having pitted on lap 16, was another consideration in Verstappen's stop on lap 32.

"We looked at Perez's out-lap, which had been pretty impressive, and rather than just sitting behind Valtteri and not trying anything, we thought 'OK, there is some traffic coming up'," Horner added.

"We could see the cars were quite badly affected by the traffic and we saw Ferrari take a bit of a hit in performance. So we went for the undercut.

"We looked like we gave one second away in the pitlane - not on the stop, the pitlane itself - and that was the difference.

"If the car had been square in the pitlane, if we had had a perfect stop, if we had a good getaway...

"That would have been enough, combined with Max's out-lap, to have got the jump on Bottas. In turn Bottas covered us, as he was focused on Max.

"That opened up the opportunity for Daniel, giving him some free air which he exploited to good effect and managed to jump both the guys and achieve third place." 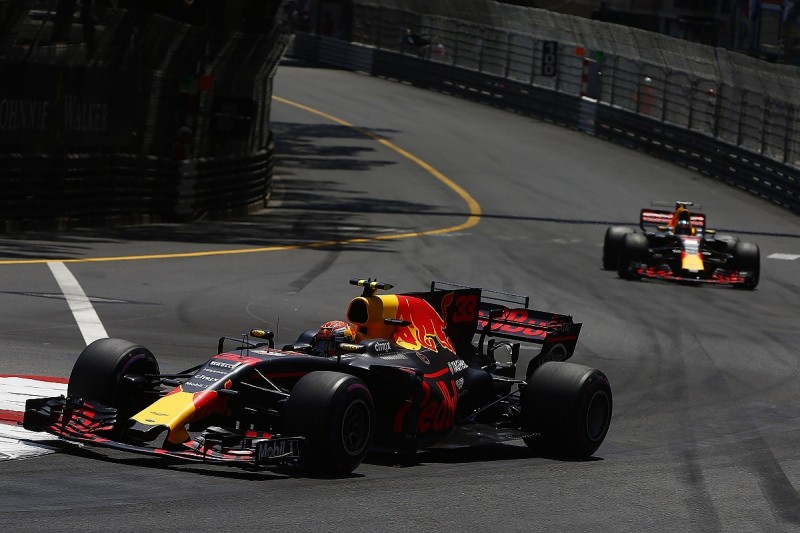 "After he got back here, he sat down and went through it calmly," he said.

"Of course emotions are running high in the car and of course you would expect him [to be like that].

"He has just seen his team-mate come from behind him to being ahead of him and in the podium position, so of course he was excited on the radio.

"But having looked at the facts and understanding the circumstances of how and why these things happen, he could understand the scenario."

Red Bull technical boss Adrian Newey says the team explained to both of its drivers pre-race that strategies would be split if they were running behind Bottas, but that neither option looked an obvious choice.

"It wasn't clear before the race which was more powerful, the undercut or the overcut," he told Autosport.

"It was close. The undercut almost worked. Unfortunately we had a slightly slow pit stop [with Verstappen].

"We said to both drivers in all honesty we don't know which is the better solution, the undercut or the overcut, and they both accepted it.

"It's the usual thing, when a driver gets out of the car he doesn't understand, his adrenalin is still up."