Max Verstappen had set the pace for most of the weekend, but lost out to his team-mate in Q3 as Red Bull claimed its first qualifying one-two of the hybrid era that started in 2014.

"It was mighty, it's our first front row lockout since Austin 2013," Horner told Autosport.

"A great performance by both drivers, but wow, what a lap by Daniel to come from nowhere, really.

"To unleash that on his last run was absolutely outstanding.

"It's come right for Daniel big time today, and you could hear his enthusiasm and enjoyment on the radio on the slow down lap, and it was great to hear."

Ricciardo said his jubilant reaction after crossing the line did not do justice to how he was feeling to get his first F1 pole position anywhere other than Monaco.

"I'm holding a lot in," he said. "I let a bit out once I heard I got pole, but I've got to save some energy for tomorrow.

"We've been quick all weekend from the start, and from the team's point of view to get a one-two in qualifying is awesome.

"We've got to finish the job tomorrow, but to confirm our pace in qualifying is really good.

"Max led the way through the practices, I knew there was a bit more in it and I just squeezed it out at the very end." 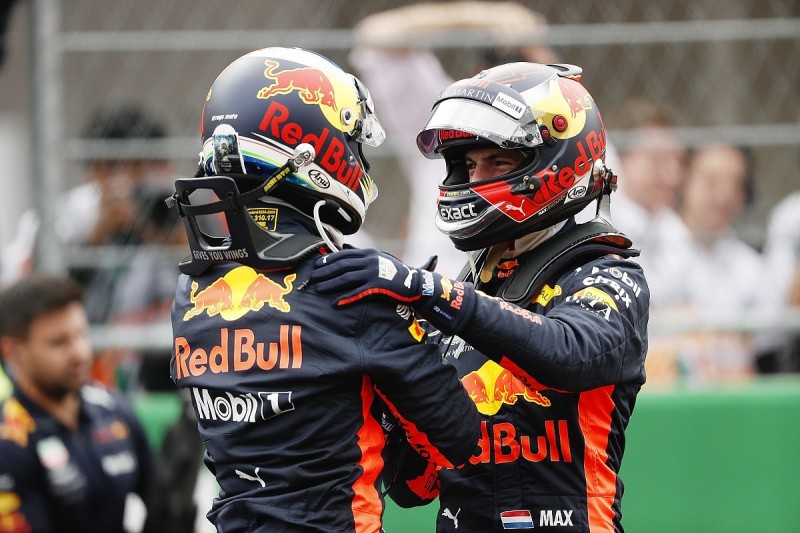 Ricciardo said the pole position did not come as a shock, although he feared he had blown his chance with an average first sector on his final run.

"I wouldn't say I'm surprised, I knew the pace was there, it was just a matter of putting it together," he added.

"The first sector wasn't that good so I was surprised I got the pole after that, but I saw the second and third sectors were strong and that's where I made the difference.

"I wasn't convinced after the first sector, but I knew the previous lap wasn't particularly clean and I was able to get a bit more out of it.

"The fast stuff, from Turn 7 to 11, I felt I nailed that, so that gave me a good impression.

"I knew I was putting myself in with a shot, but I really wasn't sure if it was good enough."

Lewis Hamilton: Red Bull 'in a league of their own' in Mexico