Red Bull has ditched its nose scoop for the 2019 Monaco Grand Prix in favour of a more conventional Formula 1 design, along with small updates to the floor

The scoop first appeared on Red Bull's RB13 in 2017, and appeared to be an attempt to satisfy the FIA's regulations regarding the front crash structure, while also staving off any high-pressure areas produced behind it where airflow begins to detach.

It has used the scoop ever since, but Red Bull arrived in Monaco with a regular 'thumb-tip' design - along the lines of the approach it ran back in 2016.

While the reason for returning to the thumb-tip configuration is unclear, it could be that the scoop trimmed off any underneath areas of low-pressure by firing ambient air downwards, which may have subjected it to a degree of lift.

At Monaco, where downforce and front-end control is of paramount importance, negating any concentrations of lift should helps drivers conducting their cars around the challenging street circuit.

The new nose is also paired up with a different specification of wing; more in line with Red Bull's early season design.

The middle element does not feature a split and allows the team to curve the top element further down. This suggests a further desire to tie up more downforce at the inboard section, which will aim to improve response at the car's front end.

Red Bull has also placed a quartet of small fins on top of the floor, just next to the undercut of the sidepod.

In the foreground of Giorgio Piola's image below, the abundance of bargeboard serrations show the level to which Red Bull is trying to turn airflow outwards. 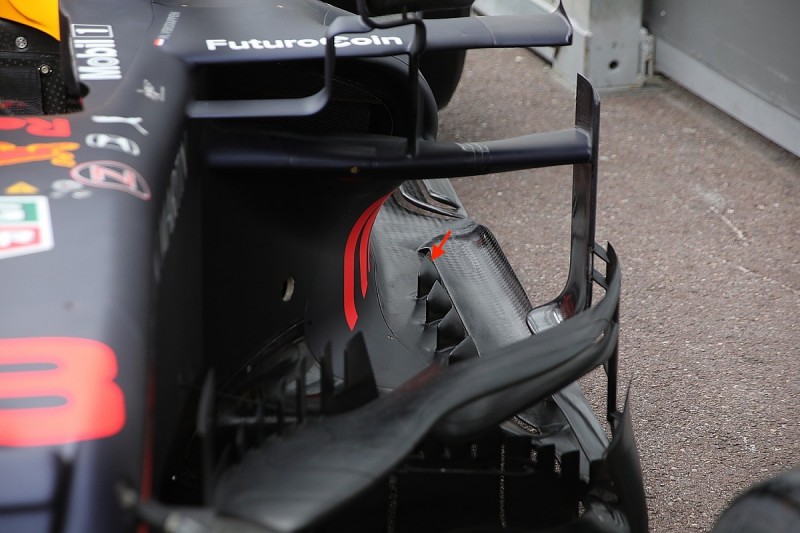 The new fins (red arrow) augment this effect, and the bottom half directs air through the slot in the floor that are placed next to them.

But the tips incline in a different direction, which will work with the curved top side of the floor to bring the airflow on top of the car around the midriff of the sidepods.

Together, these aim to limit the air impact of the rear tyres, which kick up a large supply of turbulent air.

This can ultimately damage the effectiveness of downforce-producing elements at the back of the car - namely, the diffuser and associated components.