Kimi Raikkonen has been stripped of his points finish at Formula 1's Emilia Romagna Grand Prix after being handed a 30-second post-race penalty.

Stewards determined the Alfa Romeo driver breached regulations having failed to enter the pitlane for the restart of the race after the red-flag period caused by the clash between Valtteri Bottas and George Russell.

On the lap prior to the restart following the race suspension, Raikkonen spun his Alfa Romeo at Turn 3. Sporting regulations dictate that a driver may retake his position as long as this is achieved prior to the first safety car line.

If this is not completed, then the driver must enter the pitlane and rejoin the race once the entire field has passed on the restart.

As a result, Raikkonen has lost his ninth place finish, dropping him to 13th, while promoting the Alpine duo of Esteban Ocon and Fernando Alonso to ninth and 10th respectively. It ensures two-time world champion Alonso will score a point in only his second race back after two years away.

"On the lap before the restart following the race suspension, Raikkonen spun at Turn 3," the stewards' report explains.

"Art 42.6 indicates that the driver may retake his position, so long as he does so prior to the first safety car line (SC1). At first the team instructed him to do so, but then told him to hold his position.

"Art 42.6 then indicates that should a driver fail to take his position he must enter the pitlane and can only rejoin the race once the whole field has passed the pit exit. 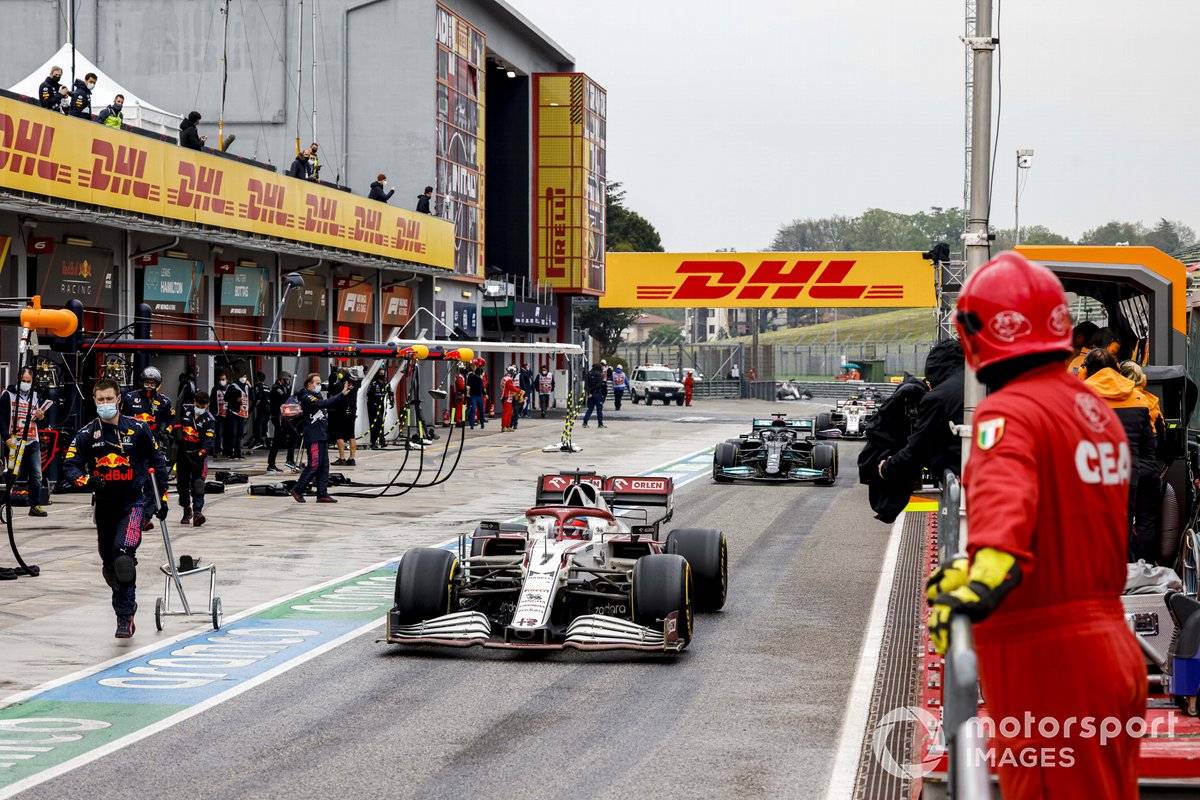 "Art 42.12 indicates that during a rolling start, once the safety car turns its lights out, 'No driver may overtake another car on the track until he passes the Line...'

"In this case, the driver caught up to the cars ahead of him between Turn 13 and 14, but the safety car turned its lights out at approximately Turn 10.

"This would appear to be a contradictory instruction and the team instructed the driver to not regain his position, fearing that this would create a safety issue in the wet conditions.

"They radioed the Race Director, but there was no time for a response between their call and the restart.

"However, the rule requiring a car to enter the pitlane if it fails to regain its position is consistent amongst several championships, has been in the FIA Formula One Sporting Regulations for several years and has been consistently applied."

The sanction follows a five-second penalty for Aston Martin's Lance Stroll, who was judged to have gained a lasting advantage by passing Pierre Gasly while off the track.

The Canadian has been demoted from seventh to eighth on the official race results.