Stroll was the first driver to switch to slick tyres after the penultimate safety car period and he dropped to the bottom of the field.

But Stroll then found himself in the lead of the race after all his rivals pitted for dry-weather tyres, before going on to finish fourth for his best result of 2019.

Stroll said an error in the final laps of the race allowed Toro Rosso rival Daniil Kvyat to pass him and take the final podium place.

The key mistake happened at Turn 8 on lap 50, allowing Kvyat to close up to him and attack through the stadium section, with Stroll hanging on but running wide at Turn 2 on the next lap and compromising his exit before being passed by Kvyat using the DRS on the run to Turn 6.

"I made an error at Turn 8 when it was still quite damp and I was the first one on slicks," said Stroll.

"That forced me on to the green Astro paint. I think it's [the] paint on the exit kerb, which allowed Daniil to overtake me.

"Without that, I'd definitely think we would have been on the podium.

"But it's easy to say that in hindsight - if only that wouldn't have happened - but I'm really happy with P4." 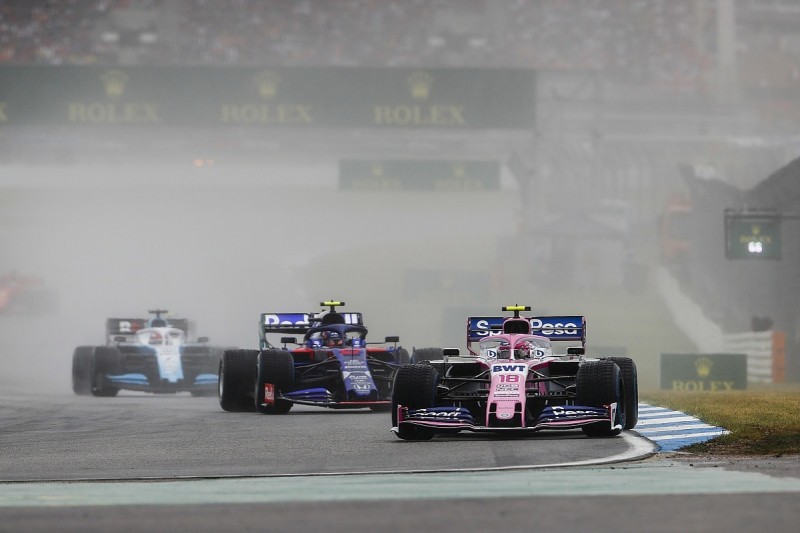 Stroll admitted that the changing track conditions made strategy difficult to read and said four of his five pitstops were to fit the wrong tyre compound for the conditions.

"It was extremely challenging and there was a bit of a gamble every time we were stopping and putting on a different compound," he said.

"I think we pitted five times, if I counted correctly, and four out of the five times it was the wrong pitstop.

"We were on the wrong tyre and at one point I spun, I think, two times in one lap on slicks with 40 laps to go.

"Then I pitted at the end with 20 laps to go and I was leading the race."

He added: "Initially when I got on to the slicks with 20 laps to go there were still two or three corners where you had to just survive, and it was not dry.

"But I knew with 20 laps to go, and everyone was on inters, and we were last at that stage, we had to give it a go and put the slicks on.

"I was leading for maybe one lap. Maybe not quite one lap.

"I heard a message on the radio saying 'you are leading the race' so it might have been for a couple of corners, and then I think Max [Verstappen] overtook me."