The Silverstone-based team has caused a stir over the opening three races of the campaign, with Sergio Perez and Lance Stroll having shown some impressive speed in the RP20 design that has been inspired by last year's Mercedes.

But while its car has been protested by Renault, which believes that the RP20's brake ducts breach F1 rules that demands teams design certain parts themselves, Racing Point remains defiant about what it has done.

And Szafnauer thinks that rather than his team be criticised for its approach - which some have argued goes against the DNA of F1 - he believes it should be applauded.

Asked if he felt it was other teams who had got their design philosophy wrong, he said: "The answer is yes. However, it doesn't come without risk.

"We didn't know that what we were doing was going to work to the level that it has. There was a big risk that we were going to take a step backwards.

"As a matter of fact, when we started developing this in the tunnel, with the ideas that we saw through pictures, we took a huge step backwards. I mean huge.

"It was seconds per lap slower in the beginning, and it was our own learning that we did for the development process of CFD and tunnel work, and more designs and redesigns, that got us to the place we did." 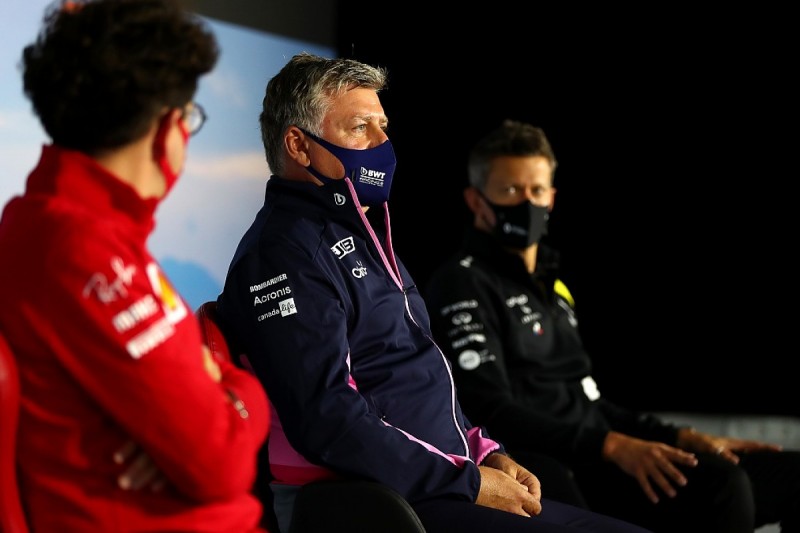 Szafnauer said that switching aero concepts - away from the high rake design it had previously run to the Mercedes style - would never be an easy step for any team.

But he said that doing so made perfect sense for his outfit because of the way it was taking customer suspension and gearbox designs from Mercedes that were tailored for the German manufacturer's specific aero platform.

"The closer or the better high rake solution that you have, the bigger the risk of changing to something else," he said.

"With us, we've been wanting to do it forever. We buy our gearbox from Mercedes, where that gearbox is designed with a low centre of gravity, so we always had compromises at the rear of the car, where the downforce is critical to have a stable rear end.

"We always wanted to get away from the high rake solution because of the compromise at the rear of the car.

"This was the first year look we were able to change. But even with that, I thought we're going to take a half step backwards before we took a step forward. It just didn't transpire that way."

While the nature of Racing Point copying the Mercedes design has been criticised by other teams, Szafnauer thinks that what it has done is no different to what any other competitors do when they check out rival cars.

"Taking pictures of other people's cars, it happens everywhere from the biggest teams to the smaller teams," he said. "Some of them just do a better job at integrating what they learn through those pictures.

"We should not forget that Adrian Newey came up with the blown floor and high rake design that Red Bull has, and now, most of the grid have that, including us [previously].

"We took pictures back then, of the floor that Red Bull had, when we were trying to do it. But we couldn't quite get it to work. I can tell you, other teams have done the same. Everybody does it, it's allowed."