The Toro Rosso and McLaren drivers made contact at the apex of Turn 3 on the opening lap, resulting in damage for both cars.

Gasly lost part of his car's floor and his suspension was bent, which meant he nearly "went out 20 times" during the race.

Despite the damage, Gasly finished in 11th position, but admitted it had been a very tough day.

"Honestly for me it was one of the toughest races I've ever had because after the contact in Turn 3 with Stoffel the rear suspension was bent and it took like half of floor on the rear out, so from that on I was just sliding everywhere and fighting so much with the car," Gasly told Autosport.

"I was quite lucky to go until the end because I almost went out 20 times in the race just trying to keep it on track.

"I gave everything but honestly it was more like driving rallycross than Formula 1 today, so pretty tough." 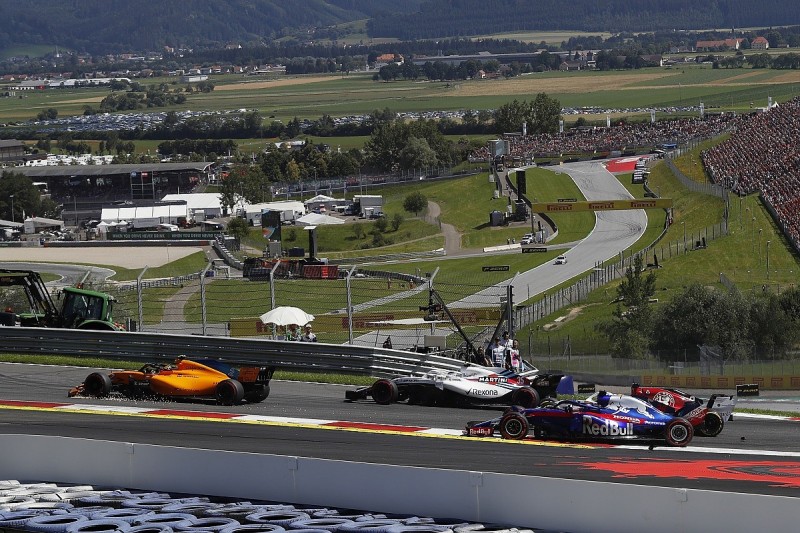 Gasly believes Vandoorne was at fault for the clash, although he reckoned it was just a misjudgement.

"I had Lance [Stroll] on my side and I think Lance had Hulkenberg and we were sort of four-wide, so the track wasn't wide enough. I know Stoffel probably misjudged it or something like this," he explained.

"I know he didn't do it on purpose but for sure it affected massively the rest of the race."

Vandoorne called the clash "just a normal racing incident" at a tight corner.

"Going into Turn 3 there was three, four cars side-by-side and it's a corner that closes up on the apex and the exit and there was no way to avoid contact, really," he said.

Gasly was left lamenting a missed opportunity to score points on a day where three top cars retired with problems.

"It was affecting performance and like every left corner I was turning and you know when you are in a go-kart and you bend the steering and one corner is super-oversteery and the other one is super-understeery? It was exactly the same," he said.

"I was sliding in every corner and so it destroyed the tyres.

"Quite a big shame because when you see [Lewis] Hamilton out, [Valtteri] Bottas out and Daniel [Ricciardo] out, there was a big opportunity and P8 was easily in our reach in normal conditions."

Gasly's team-mate Brendon Hartley also thought a points finish was possible, before a mysterious failure at the rear of his car caused him to spear off the circuit at the penultimate corner then retire from the race at around two-thirds distance.

"Halfway through the lap, I felt something not right on the rear of the car," Hartley explained.

"I immediately asked the team - I thought I might have a puncture, they said it was all fine - then as I entered Turn 9, something completely broke on the rear end of the car.

"We don't know what's broken yet. Nothing to do with Honda. There was no high impact with anything, so they're still investigating what happened.

"The team believes with the pace that I had, I could have finished in the points today so that's quite disappointing."