When Jack Brabham headed from his native Australia to Europe as a 29-year-old in 1955, he was just another racing hopeful whose achievements on home soil counted for little

But the skills he developed racing midgets on dirt tracks and then in road racing, notably in the famous 'Redex Special' - a Cooper-Bristol Mk2 - allowed him to emerge as one of the most successful drivers in Formula 1 history.

When he arrived in the UK, it was natural that he was drawn to Cooper and in pursuit of his ambition of reaching the top he embedded himself with the Surbiton marque.

With the ex-Peter Whitehead Cooper-Alta he had acquired proving a disappointment, Brabham was allowed to build up a car from a Coooper Bobtail sportscar.

It was this car he used to make his world championship debut at the 1955 British GP, starting last and failing to finish.

He headed home over the winter, winning the 1955 Australian GP at Wakefield, meaning he was able to sell the car to fund his return to Europe.

He then purchased a Maserati 250F from BRM, which, in his own words "was not the 250F that I wanted to buy" but he had shown enough to convince John Cooper to employ him as a driver.

After making his second world championship appearance in the Maserati in the '56 British GP, Brabham had his first full season at the top level for Cooper in '57.

His best result in that first season was sixth at Monaco, and the following year he was a regular top six finisher.

Brabham became an increasingly instrumental figure at Cooper and played a key role in the concept of the rear-engined T51.

He was also responsible in adapting Citroen gearboxes to be able to handle the challenge of the configuration, which proved a decisive advantage over Stirling Moss's Rob Walker-run Cooper and its fragile Colotti 'box.

A first world championship win followed at Monaco in 1959, laying the foundations for winning the title.

The following year, he doubled up thanks to a dominant mid-season run in the Cooper-Climax T53 'lowline'.

In 1961, he also competed in the Indianapolis 500, playing a key role in kickstarting the rear-engined revolution there.

Brabham believed that, had Dunlop provided longer-lasting tyres, he would have won the race rather than finishing ninth.

Back in F1, a change of engine regulations, with two-and-a-half litre units replaced by smaller 1500cc powerplants, interrupted Cooper's run of success.

And Brabham, who felt Cooper was unwilling to invest the finances needed to re-establish the marque as a title challenger, felt that staying with the company might not be the best option for his future.

This led to him teaming up with compatriot Ron Tauranac to form the Brabham marque and create Motor Racing Developments.

It soon emerged as a powerful player in F2 and F3 car production, as well as in F1.

A Brabham, the Climax-engined BT3, first appeared at world championship level in 1962 but its successor, the BT7, was the first to hit the podium in Mexico a year later.

Brabham claimed his team's first F1 win in the non-championship Solitude GP that year, but it wasn't until the next change in engine rules, to three-litre units in 1966, that it hit the front regularly.

The decision to approach Australian company Repco to produce a V8 engine based on an Oldsmobile block proved inspired. While not the most powerful, it was lighter and more compact than its rivals, as well as reliable. 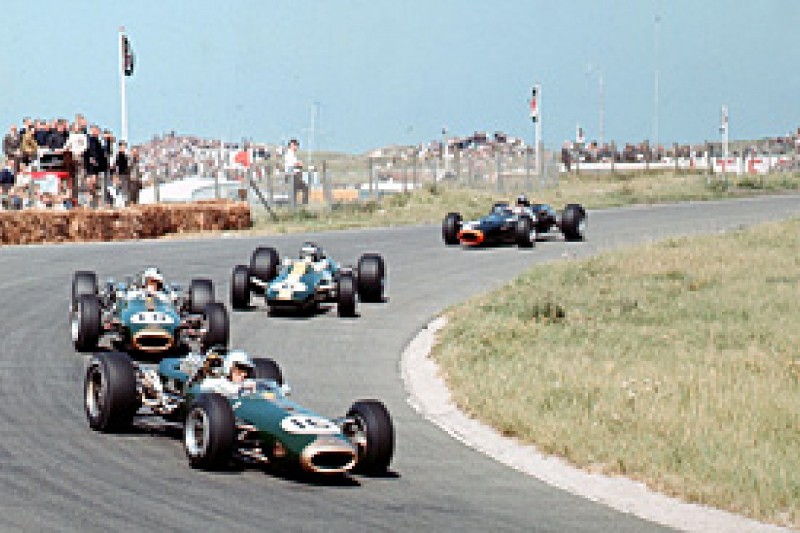 Brabham's run of four consecutive victories in the French, British, Dutch (pictured) and German GPs allowed him to win a third world championship, and he came close to adding a second a year later only to lose out to team-mate Denny Hulme.

After several lean years, Brabham hit the front again in 1970, winning the South African GP and famously finishing second at Monaco after a last corner off under pressure from Jochen Rindt.

He came close to winning the British GP that year too, running out of fuel while leading after prevailing in a battle with Rindt.

Although he finished only fifth in the standings, he regarded his final season as a missed opportunity to win the championship.

As well as his success at world championship level, Brabham won numerous non-championship races, including the International Trophy four times.

He also made regular visits home, adding a further two Australian GP victories in the 1960s while contesting the Tasman Series and was a prolific winner in F2.

Brabham retired to Australia at the end of 1970, his final race victory coming in the Paris 1000km at Montlhery sharing a Matra-Simca MS660 in October 1970.

His sons, Geoff, Gary and David, followed in his footsteps, with all three enjoying success in international motorsport.

Geoff won the IMSA GTP Championship four times as well as the 1993 Le Mans 24 Hours, with Gary winning British F3000 in '89 and the Sebring 12 Hours two years later, in between entering two F1 races and failing to qualify the dreadful Life L190.

David raced for Brabham and Simtek in F1 and has been hugely successful in sportscars, winning Le Mans in 2009.