Verstappen was preparing to take the pack back up to racing speed after the Emilia Romagna event had been suspended to clear up the wreckage from George Russell and Valtteri Bottas crashing heavily, when the Red Bull driver lost control at the final corners.

He speared left over the kerbs of the first Rivazza turn, appearing to briefly put all four wheels across the white line at the track’s edge – although footage from Leclerc’s car is unclear that this happened.

Had Leclerc opted to press on, Verstappen would have been entitled to try and repass before the first safety car line (the lap was considered to be in effect another formation lap despite the lack of standing start), but the Ferrari driver also would have been permitted to race to the line as he would have had taken over as head of the queue.

In any case, Leclerc felt Verstappen “always had one wheel on the track” and so did not attack, but Norris, who was running behind the two leaders at the time of the incident, believes the Ferrari driver should have gambled on getting ahead and arguing his case later.

“I had a great view of it,” said Norris. “Quite funny actually. I think Charles could have gone past him in my opinion.

“At that stage Max was out of control and going left and Charles kind of just hit the brakes and slowed down and stopped.

“At some point he has to go past Max because he was facing the barrier for a lot of the corner.

“I don’t know. We have to maybe ask the guys in charge what the exact ruling is for going off, as off-track, all four wheels off the track and example of [qualifying, where Norris lost his final Q3 time for running too wide at Piratella]. 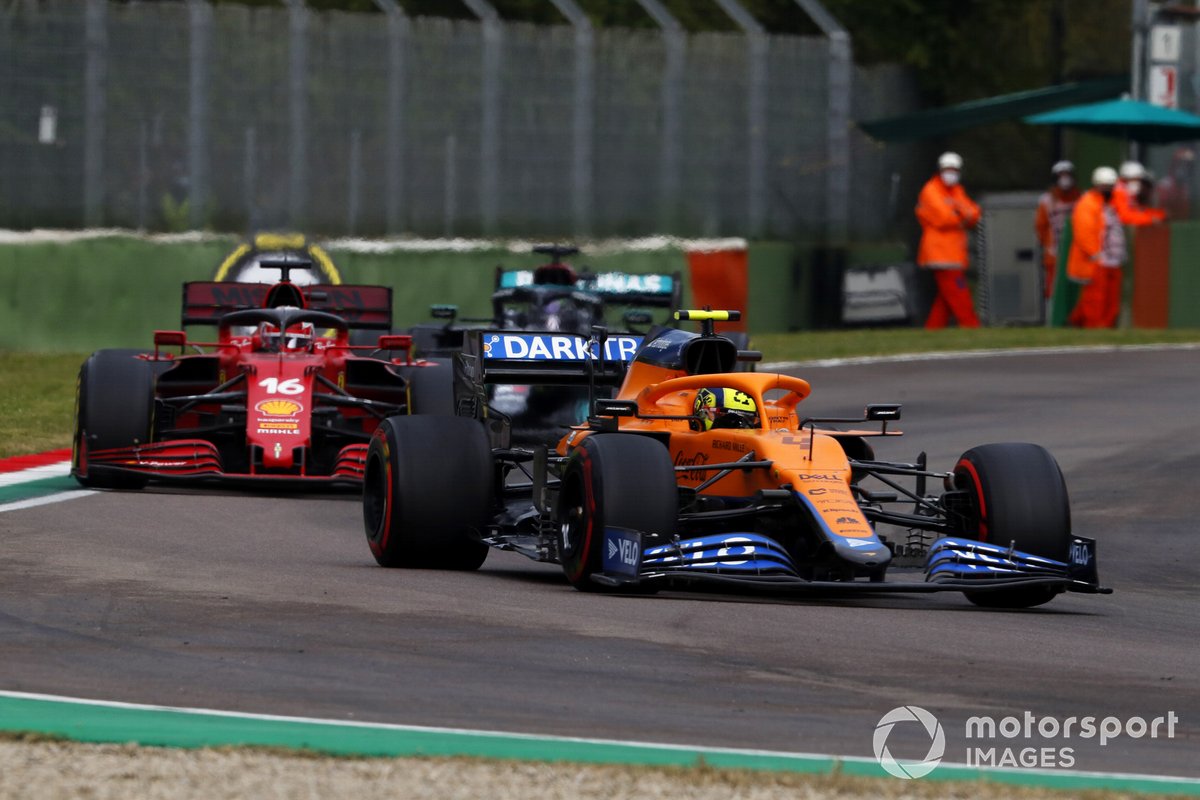 “But at the same time Max was going very slow, so it was like Charles could have driven past him at the point. I’m not sure.

“I think if I was in P2, I would have gone for it, because you have a chance at winning then. It’s a risk [that’s] worth it.”

Norris quickly passed Leclerc after the Ferrari driver fell back from the rear of Verstappen’s car when the Red Bull driver eventually instigated the restart, but later lost second place to the resurgent Lewis Hamilton.

Explaining how he approached the final stint, Norris, who defied Hamilton’s advances for five laps, said: “I pretty much started saving the tyres from lap one after the restart, knowing that the last couple of laps were going to be pretty tough [with Norris on the soft tyres compared to the mediums Hamilton, Verstappen and Leclerc were running].

“And they were. Especially with Lewis at the end. A lot of focus was the last couple of corners, getting the deployment right, using the battery in the right way.

“I was trying to save up as much as possible. In the end, I didn’t have enough rear tyre out of the last two corners and the chicane to hold him behind, but I tried.

“It was a nice little battle. It’s nice to be racing unusual cars, I guess for us – a Red Bull, a Mercedes, and Ferraris and things like that.

“It’s nice to be going up against them. Hopefully we can have some more of that in the future.”