Lando Norris believes the FIA's explanation of why it did not punish Max Verstappen's driving in Formula 1's Brazilian Grand Prix has convinced him his Austrian GP punishment was incorrect.

The McLaren driver was handed a five-second time penalty at the Red Bull Ring in July after the FIA felt that he had forced Sergio Perez off the track as they battled for position at Turn 4 in the race.

The scenario of that incident, with Perez attacking around the outside on the entry and trying to hold his line, has repeatedly been claimed as an example of why there seems to be inconsistency in the FIA's ruling on what happened between Verstappen and Lewis Hamilton last weekend.

While Norris was found guilty of an offence, Verstappen was given the all clear despite having run off the track himself after crowding Hamilton out on the entry.

F1 drivers have tried to seek clarity on the racing rules over this weekend's Qatar Grand Prix, but race director Michael Masi has made clear to them that the stance remains that all incidents will be treated on their own individual merits.

Norris says that his grasp of the FIA's approach makes him sure that he did nothing wrong in Austria – with the only difference in circumstance being that Perez ran wide into gravel while Hamilton was forced on to an asphalt run-off.

Asked by Autosport if he understood why his Austrian incident and Verstappen's Brazil defence were treated differently, Norris was not completely clear.

"Kind of," he said. "Some of the things that we now understand means that I shouldn't have got a penalty. But then also, what types of surfaces are on the outside of the circuit, whether that's gravel or tarmac or whatever, can also have an effect. Which I don't think is maybe fair.

"I think if you know there is gravel on the outside, and you know if you're not completely alongside, which Perez wasn't, then he's put himself in that very risky position." 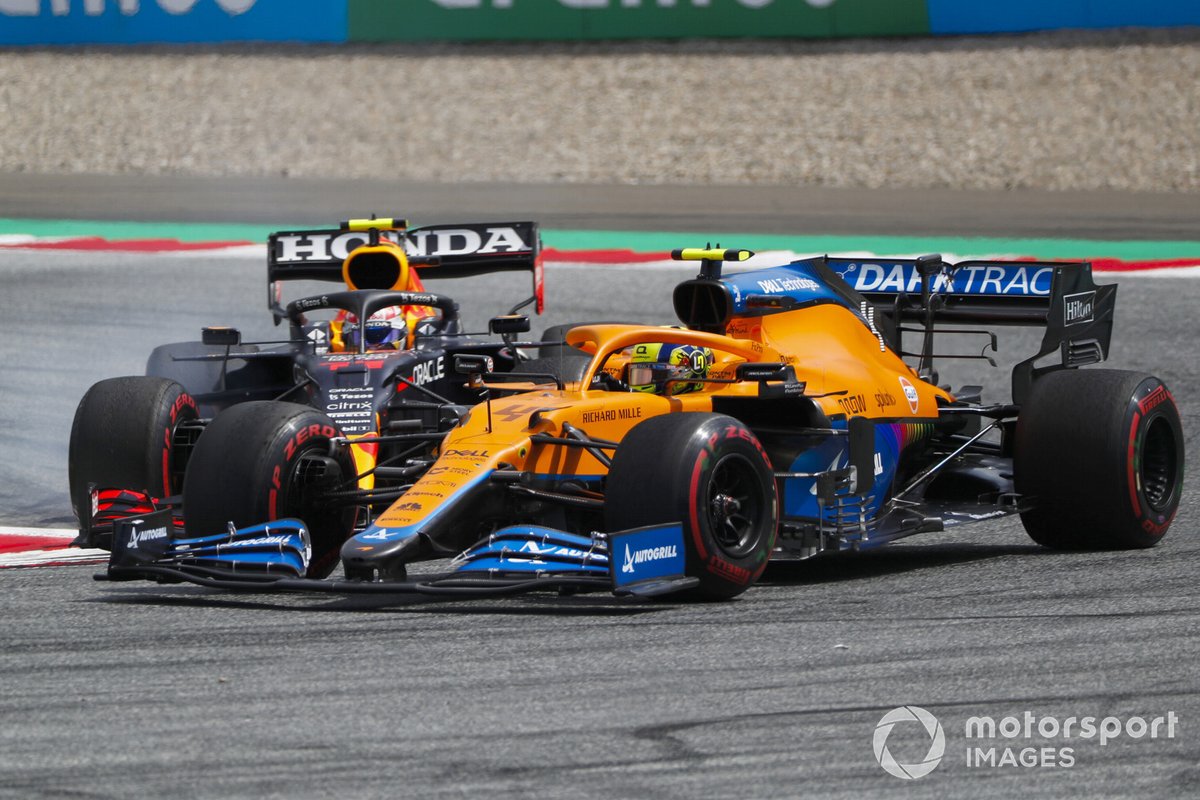 The FIA has long insisted that the consequences of incidents are not taken into account when coming to verdicts – so in theory the presence of a gravel trap or asphalt should not be the ultimate deciding factor.

However, Norris thinks that it is clearly an element that is looked at, especially considering Perez was much further back against him than Hamilton was against Verstappen.

"That's the only thing that I believe now must have been the difference: he wasn't alongside me, like all the way alongside me. It was like half a car.

"I gave a bit of space for him to back out, and it wasn't like I shoved him off. There was no contact made, so from that perspective there's no reason I should have got the penalty.

"That's not my fault: it's the guy on the outside's risk. He's put himself on the outside on the corner and it's up to him. I still feel like it's an unfair penalty I got."

Norris doubted McLaren would score podium in F1 2022 after Bahrain