Lando Norris said he was ‘devastated’ to lose victory in Formula 1’s Russian Grand Prix, after taking responsibility for the wrong tyre call in not pitting for inters late on.

The McLaren driver appeared to have the Sochi race under control late on, having held off a charging Lewis Hamilton for the lead as the race drew to its conclusion.

But a rain shower that hit the track a few laps from the end threw the event on its head, and opened the door for Norris to see victory hopes slip from his grasp.

While Mercedes pitted Hamilton to take inters, Norris elected to stay out and try to hold on in the front.

But as the rain got worse, staying on slicks was clearly the wrong choice and Norris slid off the track several times as he stopped too late and eventually tumbled down the order to finish seventh.

Speaking about the pain of losing his shot at a maiden win, Norris told Sky: “I’m unhappy. Devastated in a way.

“I guess we made a call to stay out. I think we stand by that call of course. It was the wrong one at the end of the day, but I made a decision just as much as the team.

“In fact, it was more that they thought I should box and I decided to stay out. So it was my decision. I thought it was the way to go.” 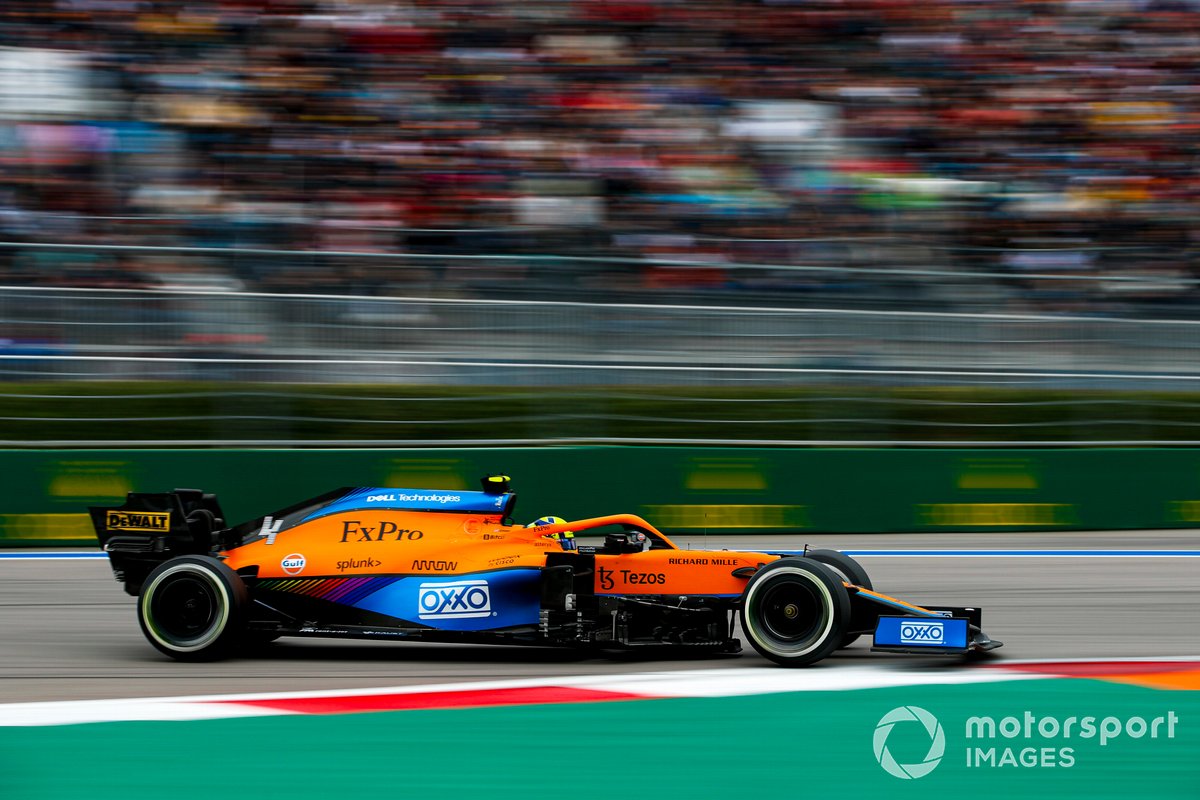 Norris said that the situation at the end of the race was especially difficult as it appeared initially, at the time Hamilton had stopped, that slicks were actually the quicker tyre.

But it was the sudden downpour which soaked the track that turned things around rapidly and wrecked things for Norris.

“I felt I did everything I could, even when it got tricky at the end,” he explained. “I made a couple of mistakes but still kept Lewis behind and started to pull away a little bit.

“So it was a bit of luck, like the laps I was out before Lewis boxed, it was I think perfectly fine for the tyres I was on, and I got told the rain was going to stay the same.

“If it was the same amount then we made the right decision and I think staying out was the correct decision. But it obviously got a lot wetter than we as a team expected and that had us over in the end.”

Norris said making the call to switch tyres was so hard because they were so close to the end of the race.

“Especially when there's only two laps to go,” he said. “If there are 20 to go you are maybe not as aggressive with decisions, but we did what we thought was right, which I'm unhappy with of course. It was wrong at the end of the day.

“Everything until then, the guys did an excellent job and have done all weekend. So I'm happy with basically everything apart from that one decision which we'll review and hopefully try not make again.”