Swiss debris fence manufacturer Geobrugg, which supplies ten of the current F1 circuits, has formed a partnership with lighting provider DZ Engineering SRL to produce a value-for-money system that will work at most tracks.

The idea is that the lights from DZ Engineering, which already supplies the Singapore GP with its system, can be fitted to current debris fences to provide an economic solution for running races after dark.

This will prevent the need for tracks to fork out for expensive and technically complicated infrastructure surrounding more bespoke lighting systems.

The lights are on long poles that are attached to the base and top element of the concrete sections of debris fences for added stability.

Jochen Braunwarth, Geobrugg's Director of Motorsport Solutions said: "Geobrugg's range of FIA-homologated debris fences have a 'plug in and play' philosophy at their heart, so to develop a new, lighting-friendly system to simplify the process of hosting night races is another positive step forward. 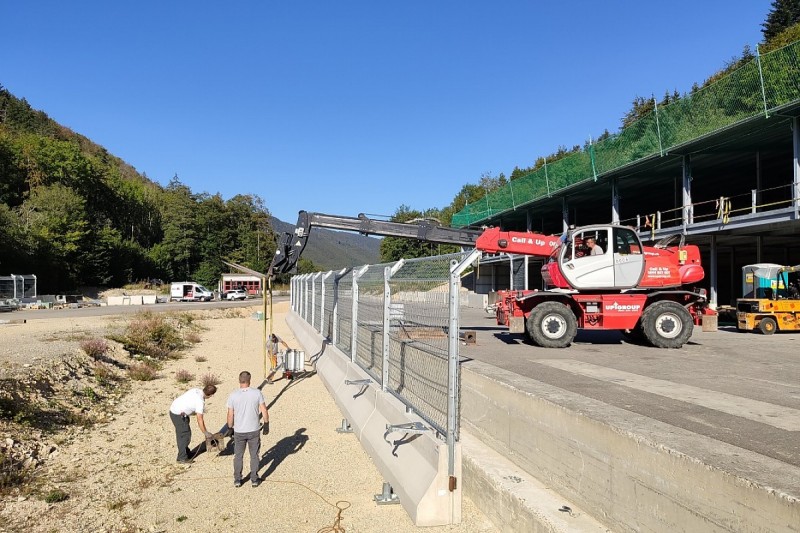 "It also links into another key element of our ethos, which is cost effectiveness. Night races can be expensive, particularly on temporary venues such as street circuits, so by combining the costs of those two systems together, we could see an increased feasibility for these events to take place."

Both companies have worked hard to not only make sure the system is attractive to circuits, but also that it does not compromise safety at all.

Several crash tests have been conducted to check that the lighting system is not compromised by the potential impact of a car with the debris fence.

In one test, a one tonne car was impacted into the barrier at 120km/h and there was no movement to the lighting pole that was positioned at various distances away.

Roberto Grilli, General Manager of DZ Engineering, said: "We're very satisfied with the system's performance during both crash tests, and it's been a great exercise to combine our resources with Geobrugg to open up a new avenue of development in this area. I hope this means that other championships get to benefit from spectacular night races that appeal to fans worldwide."