Although the world champion was ultimately given a reprimand for aborting his entry into the pits with 15 laps to go, radio communications with the pitwall revealed how seriously Mercedes took the risk of a penalty.

It had already called off Hamilton's fight with team-mate Valtteri Bottas, and then denied Hamilton's request to turn his engine down in the closing stages.

Instead Hamilton's engineer Peter Bonnington pushed Hamilton to keep building up a gap over Bottas right the way to the finish line.

Those messages alerted Hamilton who, just after taking the chequered flag, queried whether he had already been given a penalty.

Speaking about the reasoning for Hamilton being urged to extend his advantage over Bottas, Mercedes boss Toto Wolff said: "We were covering all bases. You know these things. [There] is pretty much room for interpretation.

"We just wanted to disappear in the distance as much as we could."

Here is an edited transcript of how conversations between Hamilton and Bonnington played out in the closing laps:

Hamilton pits but makes last-second dive back onto track

LEWIS HAMILTON: Kimi is staying out. 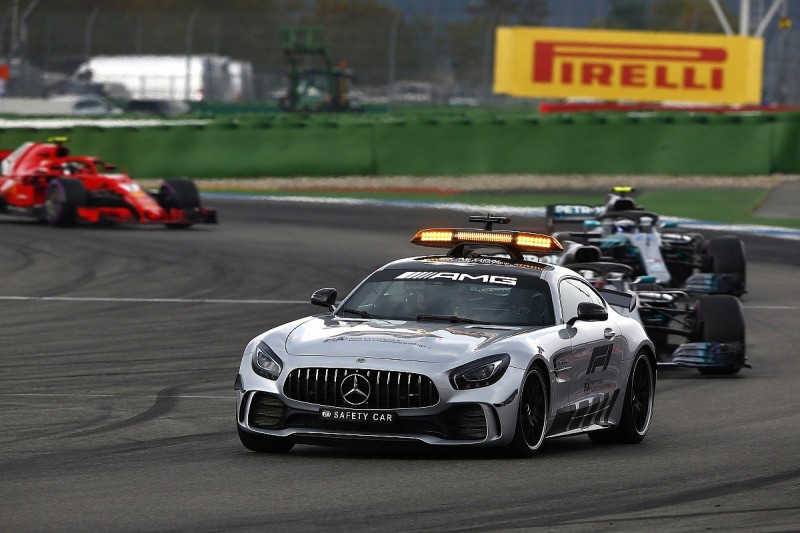 Following Raikkonen behind the safety car

LH: Are we in trouble?

PB: Negative, negative. So staying out. Staying out.

PB: DRS has been enabled.

PB: Four laps remaining. Threat of rain to the north is building.

LH: Can I turn the engine up [radio interference makes message unclear]?

PB: Negative Lewis. Let's just stay where we are. That threat of rain is still there.

Further discussions on the weather

LH: I want to save the engine.

PB: We need you to build the gap.

Hamilton enters the stadium section on the last lap

PB: Keep pushing to the line.

PB: Get in there Lewis! Miracles do happen, mate.

LH: Do I have a penalty?

How Hamilton pulled off his German GP miracle