Hamilton and Rosberg produced a thrilling battle for victory in the Bahrain Grand Prix, with Mercedes chiefs having made it clear that they were both free to fight it out all the way.

And although Hamilton admitted that his battle with Rosberg was "on the knife edge", Mercedes motorsport boss Toto Wolff has made it clear that he is happy for his drivers to deal with the situation themselves until there comes a time when they overstep the mark.

"It's great watching two drivers of that level racing each other, fair and square, not risking the other car and still delivering a mega show," he said.

"It doesn't get any better. It's advertising for Formula 1 in a moment where lots of people are talking Formula 1 down."

When asked if they will be free to continue racing like that all year, Wolff said: "Yes, until we lose some front wings and then we'll sit down again and discuss whether this was the strategy. But they are racing drivers so it is all academic...

"I think you need the drivers to understand where the team came from and it's important not to risk the image of our brand.

"We represent a big brand so we need to know what to do. And they did it in a fantastic and spectacular way."

TEAM ORDERS CAUSE TOO MUCH POLITICS

Paddy Lowe, Mercedes' executive director, said that the team was happy to put faith in its drivers, and reckoned it was easier dealing with the stress of seeing close racing than the politics of having a number one and number two driver. 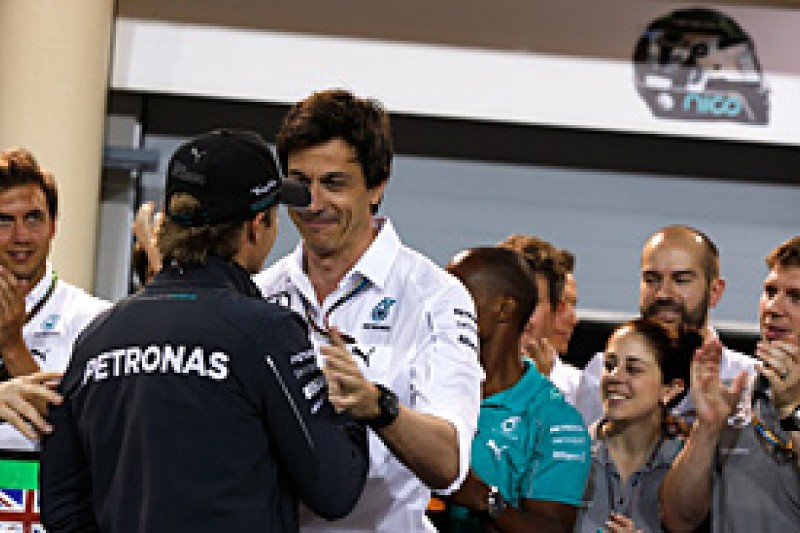 "Team orders - putting in artificial constraints - is such a terrible thing for the entertainment/the spectacle, so we believe we should let the guys race, particularly in a situation where we have a pretty dominant car, which has become clear now," he said.

"It is all the more important to keep providing that entertainment and that excitement, for all of us. That is what it is all about.

"In any case, when you start putting in team orders, everyone gets unhappy. You just end up with everyone being a loser.

"We determined from the outset that we would want our drivers to race from lights to flag and that is what we did."