Vettel had managed to pass Mercedes driver Valtteri Bottas for second at the start, and looked on course for the runner-up spot before making a second stop under virtual safety car conditions around two-thirds distance.

With none of his rivals following suit, Vettel emerged fourth and was not able to get back ahead of Red Bull's Max Verstappen for the final podium spot.

Wolff, whose cars made a single stop each and brought home a one-two, said Vettel's VSC stop did not come as a surprise given the way Red Bull had pulled off Chinese GP victory with a similar strategy earlier this year.

"It's always a very difficult call to make," Wolff said. "We had it in the past, Shanghai was trading track position versus fresh tyres.

"And we debated it today again. Based on the experience we made of struggling to overtake Max, for us it was clear that track position was more important.

"Ferrari did the opposite - you saw that it worked out for [Daniel] Ricciardo and Verstappen in Shanghai, I think this is what they were thinking.

"Always very difficult calls to make. I fully understand why they did it."

Vettel said sticking to a one-stop like the Mercedes cars had was "not an option" for him given Ferrari's higher tyre wear.

Bottas, whose second-place finish required a 47-lap stint on the medium compound, admitted he was not initially convinced a one-stop was doable.

"We obviously haven't thought it would be possible to do the race quickly with one stop," he said.

"But the conditions changed and the tyres were behaving better than expected today, so then it was possible.

"I'm happy that the team was so reactive and we could spot that. And that Ferrari didn't. I think we had a good race, intelligent, today." 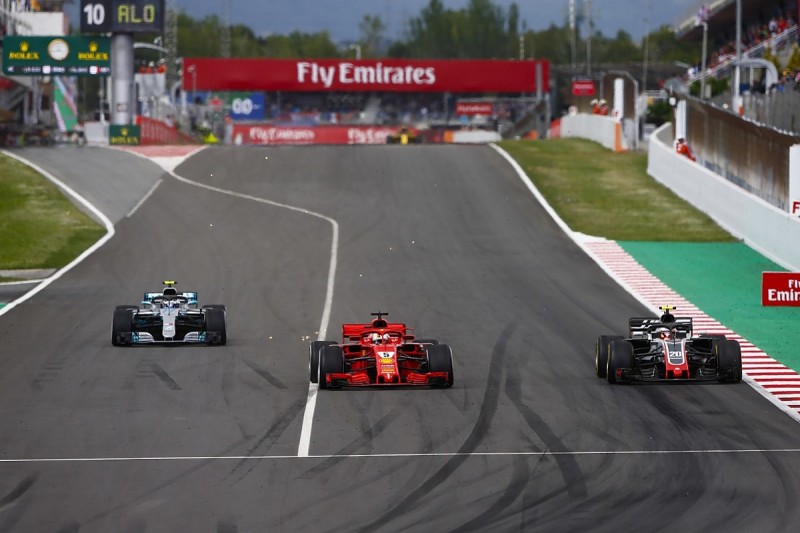 Mercedes had attempted to get Bottas ahead of Vettel by running longer during the initial pitstops, but a below-average pitstop meant the Finn exited the pits just behind the German.

Bottas was still convinced there would be other opportunities to reclaim second place.

"It felt that I had a lot more pace all through the race," he said.

"As everyone knows, it's extremely difficult to overtake here, and I could always put pressure on him when we needed, but you need such a big gap between the [two cars'] pace to get through.

"I think with the strong car we had today there would've been opportunities later.

"I'm happy that we made better decisions as a team and could get ahead like that."