Mercedes did not think its W13 was “in a bad place” following the initial Barcelona 2022 Formula 1 pre-season test, despite its porpoising problem already being apparent.

Mercedes topped the times at the Spanish Grand Prix venue with what was an early development phase package, an achievement that required significant ride height changes and metal floor stays not originally designed to be run nor considered legal under F1’s original technical rules to be added.

But director of trackside engineering Andrew Shovlin has revealed that although the team’s issue with porpoising had been spotted at its shakedown run during Storm Eunice two weeks earlier and continued at Barcelona, it was not overly concerned because the W13 was yet to run in its race specification.

That specification arrived to great intrigue at the Bahrain test ahead of the season opener, with the car transformed thanks to its ‘zero-pod’ sidepod design (the floor stays remaining and subsequently declared legal by the FIA with several squads using them to the end of the season).

But here Mercedes’ 2022 campaign unravelled as the W13’s porpoising got even worse and could not be solved until the team introduced its first major upgrade at May’s Spanish GP. 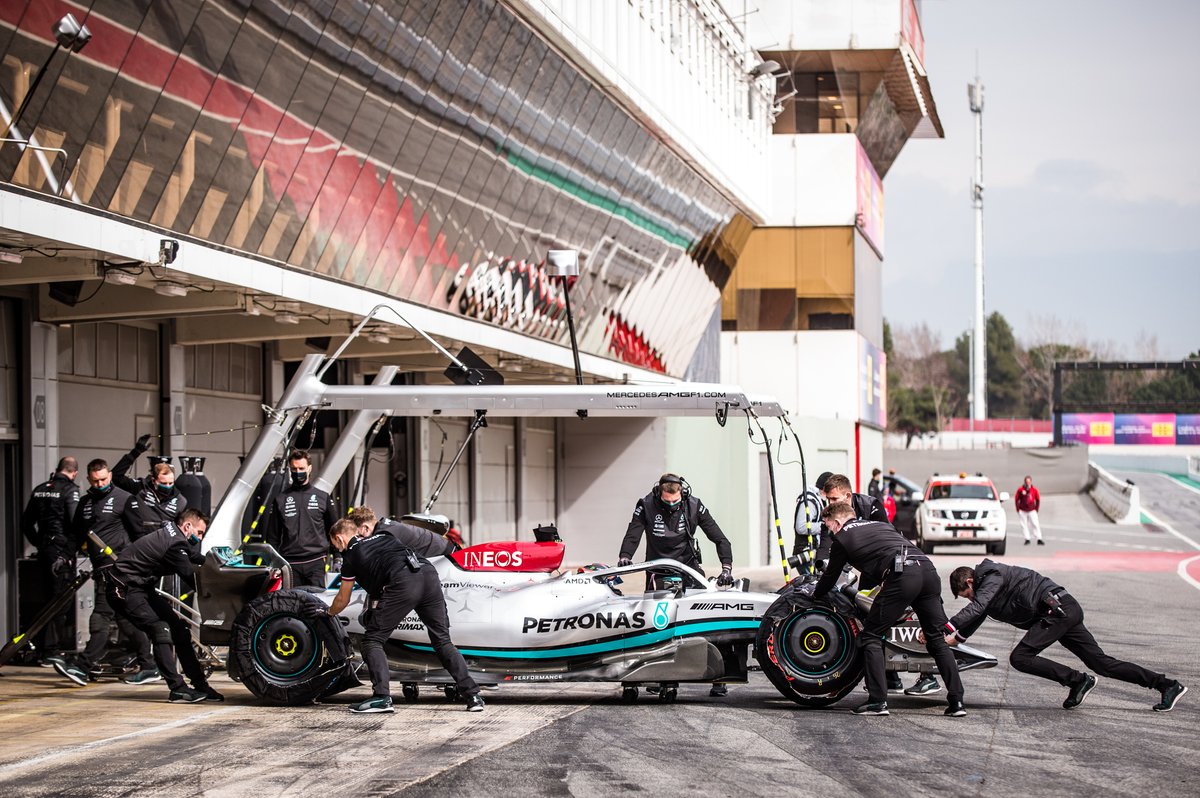 Afterwards it was revealed that Mercedes also had a problem with suspension stiffness over bumps, even though its aerodynamic issues with porpoising had been addressed.

This secondary problem and the work to improve it meant the Silver Arrows team could not make the W13 quicker through additional developments until the Austin race late in the season.

“At Silverstone [for the shakedown], we were in the middle of a storm – it was about the worst conditions we’ve ever run a car in,” Shovlin told Autosport.

“That certainly doesn’t allow for very clear and sensible shakedown running for the filming day.

“But that car – so the car that we then took to Barcelona – yes, you could get porpoising and we were running the car very high anyway on ride heights given the weather and given that it was the first running of the car.

“We did lower the ride heights to more normal levels at Silverstone and saw that you could get this phenomenon. But, we didn’t really know much about it and what was causing it.

“So, going to Barcelona was therefore a case of understanding: ‘How can we run the car? What are the problems? How can you mitigate what was happening with the porpoising?’

“At the time about the best thing you could do was just lift the car off the ground, give up performance and manage it that way.

“That car was defined much, much earlier in the development programme than the race one package.

“But the issue… at the time in Barcelona, we thought: ‘We’re not the quickest, but we don’t think we we’re in a bad place’.

“Because we were expecting to add good performance with that Bahrain package.

“The issue was that when we fitted it, the porpoising was a whole other level.

“Most of the performance that we intended to add didn’t materialise because we had to lift the car even further and at that point you couldn’t get rid of the bouncing.”