McLaren is surprised no other Formula 1 team adopted its clever diffuser design, but doesn’t think it will take long before it's copied following Bahrain testing.

As revealed by Autosport last weekend, the Woking-based team emerged in pre-season testing in Bahrain with a unique diffuser solution that tries to claw back some of the losses triggered by new aerodynamic rules.

For while the height of diffuser strakes has been trimmed by 50mm this year, McLaren has cleverly extended the floor transition in a central area not limited by this restriction to allow it to run deeper fins.

McLaren technical director James Key has insisted the design is not trying to exploit a loophole in the rules, and instead says his team has implemented what he thinks is a ‘straightforward’ concept.

“It is a normal design idea, and actually I think we are a bit surprised that maybe we're the only team with that,” explained Key.

“It's just one feature of many in an area which changed for this year.

"You've got a certain regulation of a continuous surface in that area within the Y250 position, either side of the centreline of the car.

"Those little vortex generators down there which you see as well on pretty much every car now, these little aluminium or carbon parts are actually governed by de facto the same rule. So it's fairly straightforward.

“You need the CAD screen to see it, because you're taking cross sections of a 3D surface, so it's fair to question I suppose when it's difficult to tell without that CAD data to prove it's within the boxes it should be in and to prove it's a continuous surface. But that's really all it is.” 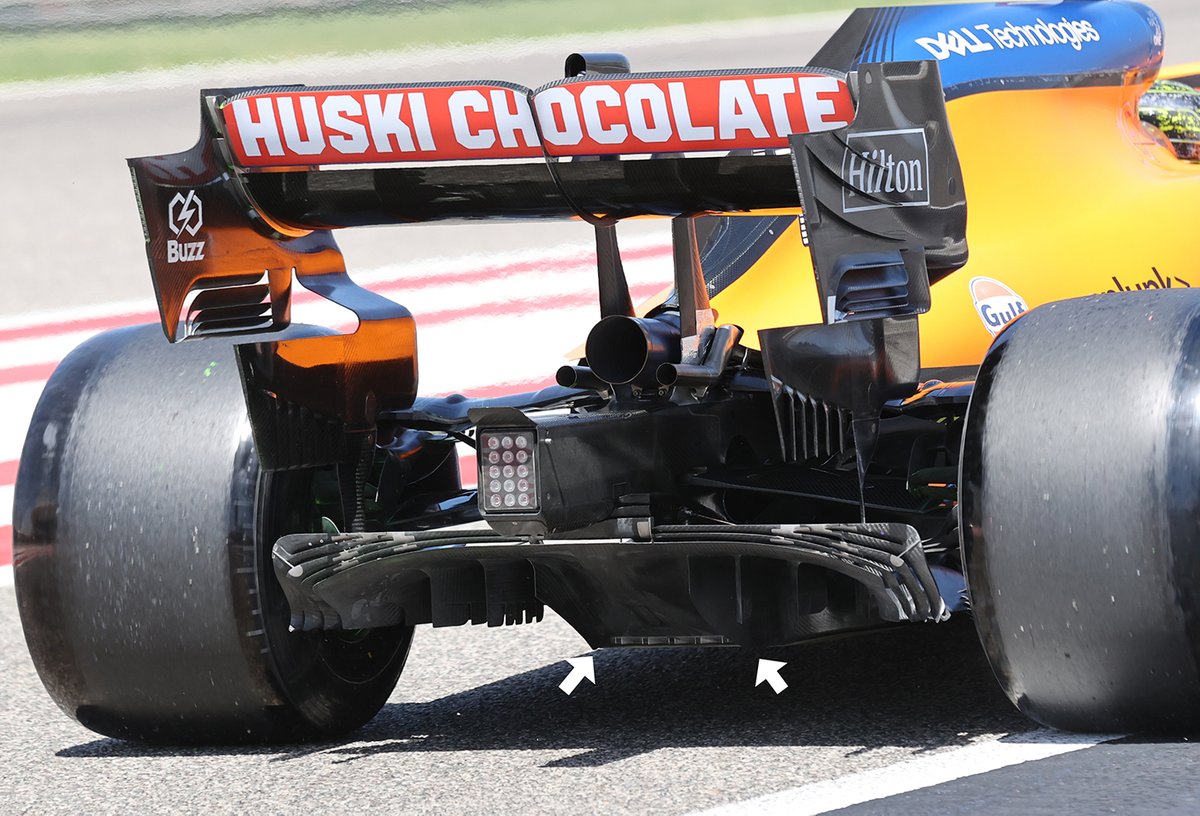 McLaren’s rivals will almost certainly be evaluating how much benefit there is to being able to run the two longer diffuser strakes in that region, with Key suspecting others could follow suit in the early stages of the season.

“I think the first port of call with any idea you see out there is CFD, so I think you can jump on an idea that you spot on another team within a week easily nowadays,” he explained.

“I guess if there's still interest after a week, whether it's our diffuser or Mercedes' edge of floor detail or whatever it is, I think you can get a feel for things quite quick.

“Then it's really understanding how it works with your car. That's the key to this.

"You can then end up with a unique geometry of your own because you might understand the principle, but then you have to adapt it accordingly that it works with your car.

"The diffuser situation for example is also very stable in that environment as well.

“So you'd probably therefore wind tunnel test it, which might be a week or two down the line, and then you've got to manufacture it.

"These particular steps are pretty straightforward. So you could say between three and five weeks between taking the picture and putting it on the car if you really wanted to push this through.”

Key was full of praise for McLaren’s aero department though, in having first spotted the way the design could be incorporated for 2021.

“I think it's always nice for a team to come up with an idea which is unique and the credit fully goes to our aero department and the guys in the rear aero group for realising that there was an opportunity there to use the new regulations in such a way,” he said.

“I suppose it's one of the visible things which gets talked about a lot, but ultimately it's just a bit of a much wider picture of a complex part of the back of the car.

"I'm sure it'll be forgotten by the time we get back here in a couple of weeks' time.”