McLaren Formula 1 boss Andreas Seidl admits his team lost a shot at a German Grand Prix podium by playing it safe, having gone conservative once the Renaults retired

Carlos Sainz Jr took fifth for McLaren at Hockenheim, but lost out to third and fourth place finishers Daniil Kvyat and Lance Stroll by not matching their early stops for slick tyres.

Seidl admitted that McLaren preferred to bank points once Renault - its rival for fourth in the constructors' championship - was out, following an early failure for Daniel Ricciardo and a crash for Nico Hulkenberg.

"Towards the end of the race, seeing who dropped out, and that the Renaults also dropped out, we played it conservative, staying in line with what was happening at the front," said Seidl.

"Obviously the two cars behind took the risk and benefited from it, so well done to them.

"What made the great result for Stroll was taking the gamble from P14 to go on dry tyres two laps earlier than anyone else.

"From our point of view we didn't want to take a risk at this point, because you could crash out and then you have a different discussion after the race.

"When you speak to Carlos, he's disappointed, but given where we have been in the middle of the race we can be very happy with P5.

"With the calls towards the end of the race we simply played conservative, because for us it's more important to score the points on the table, especially with a race weekend like that, with our main competitors dropping out, [rather than] trying a gamble from P5 to go for glory."

Sainz had an eventful race including a trip off the road at the final corner and gaining ground by picking intermediates when others went for slicks early on.

He admitted straight after the race that he felt "bitter" about losing a potential podium, but backed McLaren's strategy decisions.

"I perfectly understand that we didn't pit because no one did actually out of the top 10, or top five cars," Sainz said. 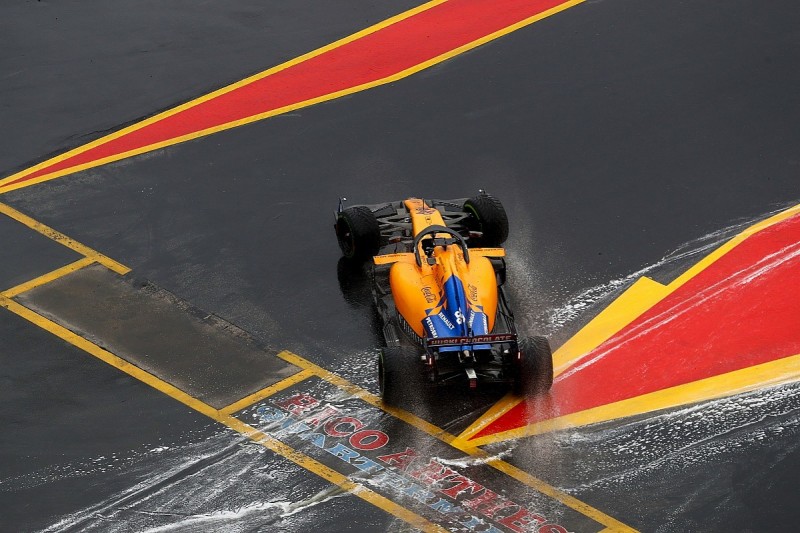 "I did have the feeling it was the right thing, but at the same time it was very risky, so I back the team totally.

"When you see Kvyat celebrating a podium, and Stroll in front of you, and they were really far behind [earlier], it feels very bitter right now.

"But at the same time, I don't think we would've done anything differently.

"We just did everything perfectly and the guys who had nothing to lose just took a decision - a risky decision - that turned out to be right."

McLaren went into the German GP 21 points clear of Renault in their constructors' battle.

Renault's double retirement coupled with Toro Rosso taking third and sixth with Kvyat and Alex Albon means Renault is now down to sixth - three points behind Toro Rosso and 31 off McLaren.

"Scoring 10 points, and further extending our lead compared to the other midfield teams was great after a weekend which was not easy for us, because we were struggling here in terms of performance," said Seidl.