Stoffel Vandoorne lost track time during Tuesday morning's test session at Barcelona after an engine change was needed to investigate an electrical problem.

That followed a pair of issues in the first week of F1 testing, and time is now running out for Honda to fix its reliability problems before the season opener in Australia.

Asked by Autosport how much strain the latest issue was putting on the relationship between McLaren and Honda, racing director Eric Boullier said: "Maximum.

"Obviously we are in F1, we are racing, and we have to perform.

"So the pressure is obviously huge and we put the maximum pressure on all of our relationship with Honda, and the same for them.

"We cannot put a footstep wrong.

"We need to be able to deliver the best car as well, so this is both sides."

Following a problem caused by the oil tank design on the opening day of the first test, last Tuesday's failure is believed to be related to valves, before today's electrical issue.

Boullier suggested, however, there there was a common factor in two of the problems, which delivered hope of finding a fix.

"From the outside world it may look like it is a different problem, but at least two of the problems were the same," explained Boullier.

"So it can be addressed in time.

"The one thing is we are running the same spec as last week so obviously that doesn't mean there are any changes in this block or any modifications done. 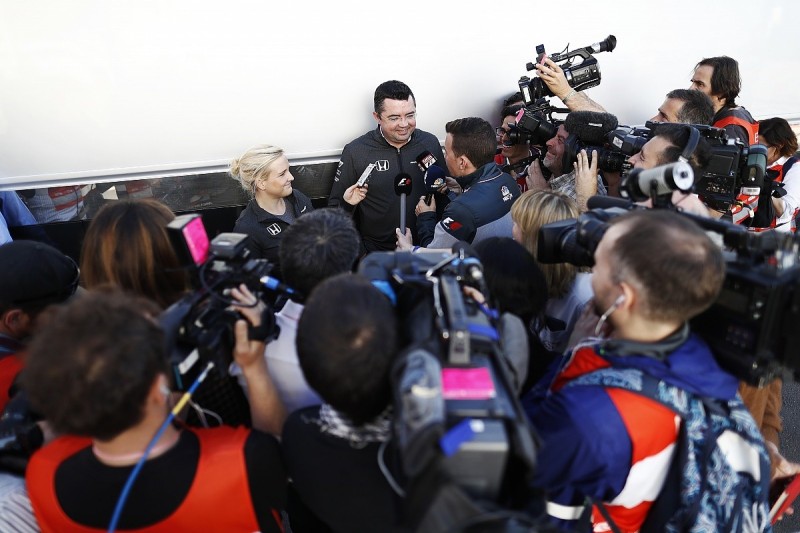 With McLaren falling behind in testing mileage, it is facing the prospect of heading to Australia on the back foot.

Boullier maintains, however, the dramas were not yet a big worry, although the onus was on Honda to get on top of matters quickly.

"Not very much concerned yet, let's say," he added.

"Obviously we would like more laps because we would like to test more parts, but the few we have done is good, and the correlation is good, so we can now build a bit on predictions.

"For the rest, obviously I leave this in the hands of Honda to make sure that they investigate properly, they address it properly and we have to rely on our partner and we believe that they will do it."

Although Boullier said McLaren board members had made their feelings clear behind closed doors at Woking, he insisted no thought was being given to cutting short the relationship.

"No. We have a contract in place," said Boullier.

"We don't even think about it, because there is a contract between us, a long-term contract, and we want to build on it even if it is not ideal times."