Adrian Sutil has called for Pirelli to revise its wet tyre compounds, after describing the current rubber as "the worst I have driven" in Formula 1

The German failed to make it past the first segment of qualifying for Sunday's Malaysian Grand Prix, and told BBC Radio 5 Live immediately after the session that the wet Pirelli was "the worst tyre I've driven in the wet".

The Sauber driver blamed the red flag caused by Marcus Ericsson's crash for his early exit from qualifying, but said the Pirelli tyres were too hard given the amount of downforce removed from the cars by the 2014 regulations.

"Not only have we lost 20-30 per cent downforce due to the regulation, they also give us the hardest compound available," Sutil told AUTOSPORT.

"They've made the tyres harder, they've got rid of the downforce and now we have no grip. And in the rain you have no grip anyway and a bad rain tyre.

"It's all over the place. It's not only us, you can see the on-board [videos] of other cars; it's like rally driving."

"I don't like them as well," he told AUTOSPORT. "You go out on the first lap and it's the best, then you get slower because you lose grip.

"The degradation in the wet, the way the wet behaves, is not good."

Other drivers said they could not feel much of a difference between this season's wet tyre and last year's. 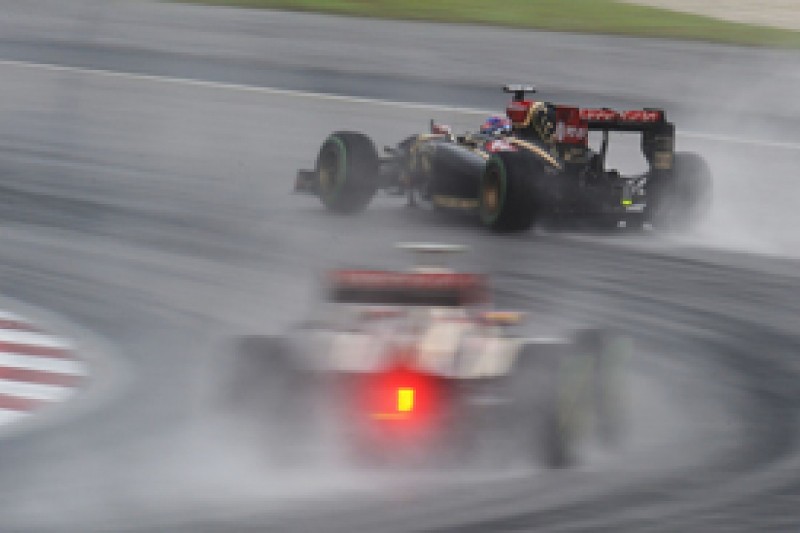 Mercedes' Nico Rosberg and Lotus driver Romain Grosjean reckon the struggles for grip are more to do with the way the engines deliver power, rather than the tyres.

"It is not such a big difference from my point of view," said Rosberg. "It is just that having more torque available, it is a bit more difficult to put the power down on the exits."

"It is one of those tracks where it is tricky and there is a lot of standing water," added Grosjean, who spun on his final lap in Q2.

"We know that they are certainly not the best of wet tyres that we have driven, but I have not felt any big difference from the past.

"We drove inters and extreme, and didn't have any big aquaplaning or anything, so they are safe."

Pirelli motorsport director Paul Hembery has dismissed Sutil's complaints, and reckons the fact that most drivers were happy with the wets shows that progress has been made.

Speaking to AUTOSPORT he said: "Overall we are happy with the situation regarding our new wet tyres.

"There were no wear issues, and the tyres are better when it comes to dealing with aquaplaning.

"We've closed the gap between the inter and the wet too, which led to some interesting strategic choices."

Hembery also pointed out that Pirelli is always facing compromises when it comes to producing tyres that will work in the variety of different conditions that are experienced during the season.

"We also must not forget that Malaysia has a unique situation in terms of the temperature when it rains, and the abrasive track surface - so that obviously leads to some overheating," he added.

"But we have to prepare tyres that can be used at all different circuits."