Lewis Hamilton claimed pole position for the British Grand Prix for the fifth time in his Formula 1 career in qualifying at Silverstone, but is under investigation for potential impeding

The Mercedes driver took top spot early in the 12-minute Q3 session that decides the top 10 on the grid with a lap of 1m27.231s using the super-soft Pirellis that proved the tyre of choice for all.

That put Hamilton two tenths of a second ahead of world championship rival Sebastian Vettel, and on his second run he delivered a mighty lap of 1m26.600s to provisionally seal his 67th pole position in F1 - now just one behind Michael Schumacher's record.

But Hamilton is being investigated for a potential impeding incident at the end of his first run in Q3 when Haas driver Romain Grosjean complained of being held up by him at Club corner.

Ferrari driver Kimi Raikkonen jumped from fourth to second on his final lap, ending up 0.547s slower than Hamilton.

Vettel struggled on the first two sectors of his final lap, meaning he ended up third and two-tenths off his team-mate.

Valtteri Bottas was fourth fastest, with a lock-up at Turn 3 among the places he lost time on his second run, but has to serve a five-place penalty for a gearbox change. He is the only driver in the top 10 who will start the race on soft-compound Pirellis having set his time using that tyre in Q2.

Max Verstappen was fifth fastest, with Renault driver Nico Hulkenberg sixth to earn his best starting position of the 2017 season.

Force India pairing Sergio Perez and Esteban Ocon were seventh and eighth, with Stoffel Vandoorne ninth on the first time he has participated in Q3.

Grosjean was 10th and slowest in Q3 after first losing three tenths behind Hamilton on his first run, then only making a small improvement on his second.

Renault's Jolyon Palmer missed out on making Q3 by less than a tenth of a second, setting the 11th fastest time ahead of Toro Rosso driver Daniil Kvyat.

Fernando Alonso proved unable to join McLaren team-mate Vandoorne in Q3, with his final flier half-a-second off the Belgian and only good enough for 13th.

Alonso will start at the back thanks to a 30-place grid penalty for new power unit components being introduced.

Carlos Sainz Jr was 14th fastest ahead of the Williams of Felipe Massa.

Williams driver Lance Stroll was fastest of those to be eliminated in Q1 thanks to a last-gasp effort by Alonso to jump from last to first.

It started to rain 12 minutes before the session, leading to a flurry of drivers going out at the start of Q1 using a mix of intermediate and slick rubber before it emerged it was too damp for the latter. 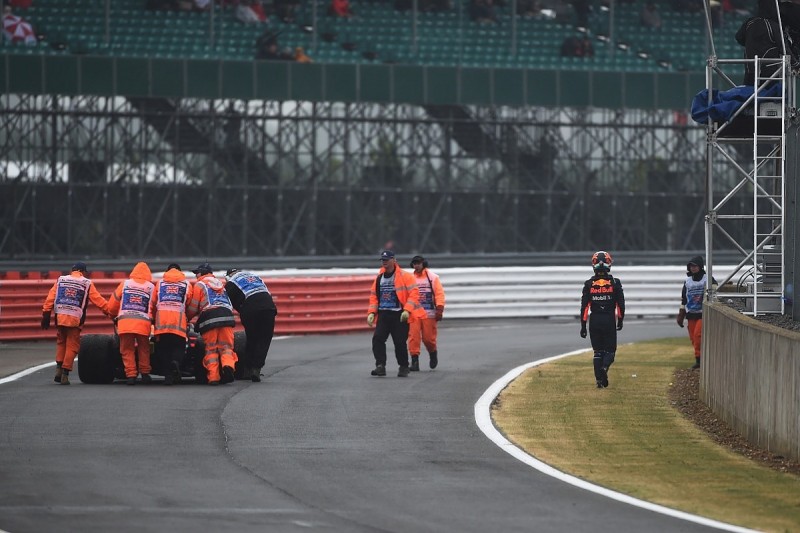 Red Bull driver Daniel Ricciardo, who was fastest early on using intermediates, then stopped at Luffield reporting a loss of power, leading to the session being red flagged for five minutes.

The session got going again with 10 minutes remaining, with Alonso running on intermediates but opting to pit with just enough time to bolt on super-softs and complete his out-lap before the chequered flag.

He managed to do that, crossing the line moment before the flag, leading to him taking top spot by 1.3s and relegating Stroll into the dropzone. Alonso was one of only two drivers, alongside Ocon, to use slicks in Q1.

Ricciardo was quickly shuffled down the timing screens, ending up 20th slowest, but is current due to start one place higher despite his five-place grid penalty for changing a gearbox because of Alonso's drop.