Kvyat raced for Red Bull in 2015 and the first part of 2016, before being demoted to Toro Rosso then dropped from the programme entirely before the end of the 2017 season.

He was re-signed by Red Bull to rejoin Toro Rosso for 2019, and scored a shock podium in the rain-hit German Grand Prix during a strong first half of the season.

However, when Red Bull opted to drop Gasly to Toro Rosso, it drafted in F1 rookie Albon so it has knowledge of all three drivers at the senior team as it weighs up who to place alongside Max Verstappen in 2020.

Kvyat said: "I don't have any disappointment or anything. My job doesn't change and my year has been fantastic.

"I look at that rather than at other things that are a bit more out of my control."

He added: "I understand [the decision]. They have their reasons.

"I think my year has been very strong but they have also other reasons to try Alex in a very competitive car.

"The decision was Red Bull's, I have to respect it and accept it, so no problems with that.

"The thing we should not forget is I've been to Red Bull already, and it certainly played a role. 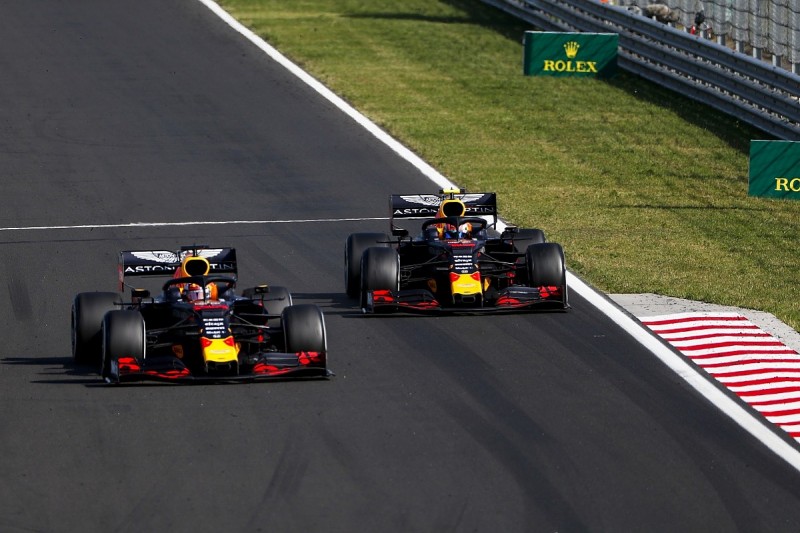 Kvyat joined Ferrari as a development driver during his time away from Red Bull, but by returning to Toro Rosso he earned an outside chance of an unexpected recall to the senior team - particularly when Gasly's struggles became evident.

He said his job "doesn't really change" after the driver swaps, despite the chance to land a seat alongside Verstappen theoretically improving.

"It is important to keep doing your own thing, as good as you can every race, and try to maximise every race," said Kvyat.

"I'm not thinking too deeply about the future right now."

Kvyat said he could not be too "greedy" with his ambitions after being handed a return to F1 by the company for this season.

"One thing with Red Bull is that it is always open," he said when asked by Autosport about having the chance again for 2020.

"Whenever someone doesn't perform, there is always automatic pressure. Especially if someone else in the junior team is performing.

"It is not going to change in a next few months.

"I cannot get too greedy, because it is incredible that I already managed to come back to Formula 1.

"Then already all of you were pushing me to the senior team after a couple of months since I came back.

"Maybe things are [progressing] fast. For sure Red Bull has their own plan."

The one area Mercedes is losing