Kubica thwarted by updates falling off "fragile" Williams in Germany

Kubica, who was the only Williams driver to trial the team's new package, said he lost the unspecified bodywork pieces on his installation lap.

He subsequently spent more than 15 minutes in the garage before returning to the track.

"We didn't have an easy day - [I was] compromised already on the installation lap," said Kubica, when asked by Autosport whether the new parts felt like a step forward.

"We'll have to revise everything and fix some parts in order that they stay attached to the car.

"It's the second weekend in a row that something is breaking down.

"When you leave the garage and already on the installation lap you are, let's say, compromised... It's very important for us to do our programme which we set up.

"Unfortunately we were influenced by this [issue] straight away, so it wasn't an easy day." He added: "We hope we can fix it.

"We were a bit too fragile, that's how it is, so we have to make sure everything will stay attached to the car, and hopefully tomorrow will be a better day."

Kubica said it was hard to give a verdict on whether the package had improved Williams's FW42.

"[The] conditions are completely different, the track is different, and the tyres are operating in different windows, so it's impossible to judge," he said.

"Of course I have a feeling, but if you ask me to compare Silverstone, which was 18C, with 38C and a completely different track [at Hockenheim], it's impossible to compare unless you have a magic ball." 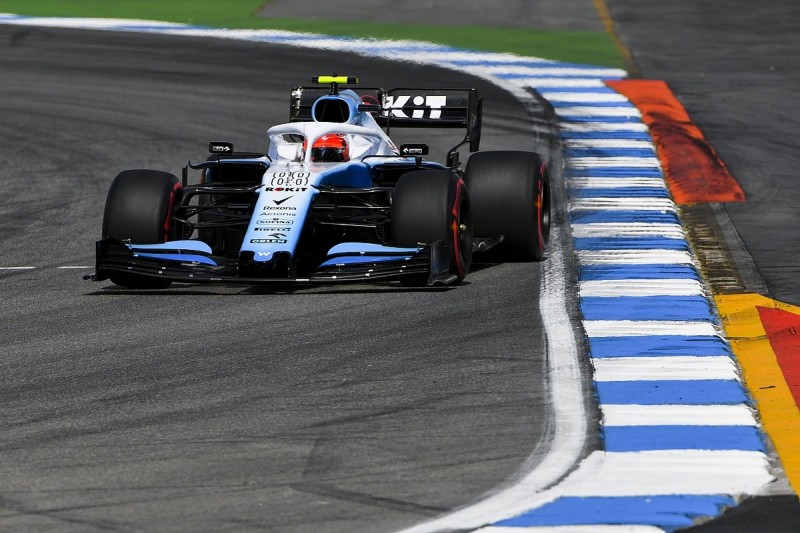 Claire Williams confirmed that the update will also be trialled by Kubica's team-mate George Russell on Saturday, after a second set of parts arrived at the race.

When asked about the package, Russell said: "[I'm] definitely looking forward to putting a bit more performance on the car.

"I think you always look forward to that, but today it's very difficult to know exactly what the improvements were.

"So [it was] difficult to get a back-to-back, but the first times seemed relatively expected.

"I think it was very unrepresentative for the weekend. I think it's the same for everybody down the grid.

"We've learned some things, got a lot of evaluating to do tonight of the parts Robert tested."