The Finn led the opening stint of the race after taking his first pole position since 2008, but he fell behind Vettel during the pitstops, with the German coming in five laps later and rejoining just ahead.

From there, Vettel drove away from Raikkonen with ease, taking Ferrari's first win in the principality since Michael Schumacher's triumph in 2001.

When asked how he felt about the race after looking downbeat on the podium, Raikkonen said: "I don't know. Obviously it didn't work out very well for me.

"Other than that...not much I can say about it.

"It's still second place, but it doesn't count a lot in my books at least.

"It doesn't feel awfully good - that is how it goes sometimes. One of those days we should have had a bit more." 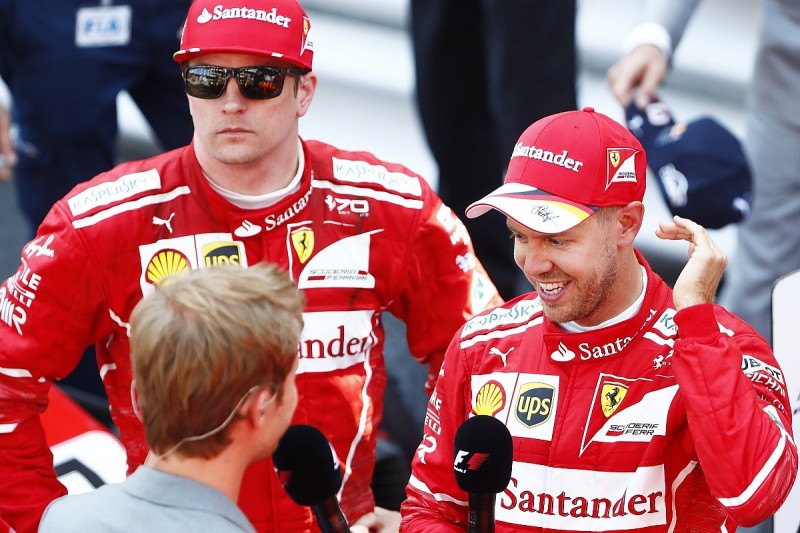 Amid suggestions his race strategy was chosen in a way that would benefit Vettel's title hopes, when asked why he pitted when he did, Raikkonen added: "I was called in. That is about it.

"Obviously they had reasons for it, but it is not up to me to answer.

"I can stop the car if I like [in the pits] as I am driving it, but we work as a team and if you don't believe what you have been told or how it works it will get very complicated.

"Today as a team we wanted a one-two, it happened, but for myself, I could have done a bit better.

"I haven't seen the big picture, I only know that we came second.

"The team got a one-two, which is great for the team, but the rest - until we have meetings and we can see all the graphs I don't know."

Vettel, who now leads Lewis Hamilton by 25 points in the championship, said the different strategies for the Ferrari drivers was not part of a pre-race plan.

"We couldn't plan much - the plan was to pull away but Valtteri [Bottas, in third] had good pace," he said.

"I saw Valtteri pitted and Kimi responded, I still had a bit of a gap and nothing to lose so I pushed as hard as possible and in two laps I surprised myself to pull a gap and come out in front.

"The car was really good and I pushed everything I could, so I knew if there was a chance [to jump Raikkonen] that was it."