Although the Maranello-based outfit has not finished on the podium yet this season, the team is confident that the rapid development rate of the new 2014 turbo engines means it can make big improvements.

Raikkonen said ahead of the Bahrain Grand Prix that while Mercedes remained favourite, the competitive picture would change so much this season that the title fight was not yet an exclusive affair between Lewis Hamilton and Nico Rosberg.

"Obviously they have been looking strong over the test and over the first two races, but I am sure we have some big gains that will come," said Raikkonen.

"I am quite far away in the points, but that can all change with the new rules. And with only two races done, we try to do the best that we can.

"We try to improve but it is not easy to catch up with them. But we don't give up. We know where we need to improve and I am sure we are going to get there."

Raikkonen has endured a tougher start to the season than team-mate Fernando Alonso because he has struggled to get comfortable with the front end of the car.

The team has focused on trying to improve the interaction of its energy harvesting, which has affected braking. 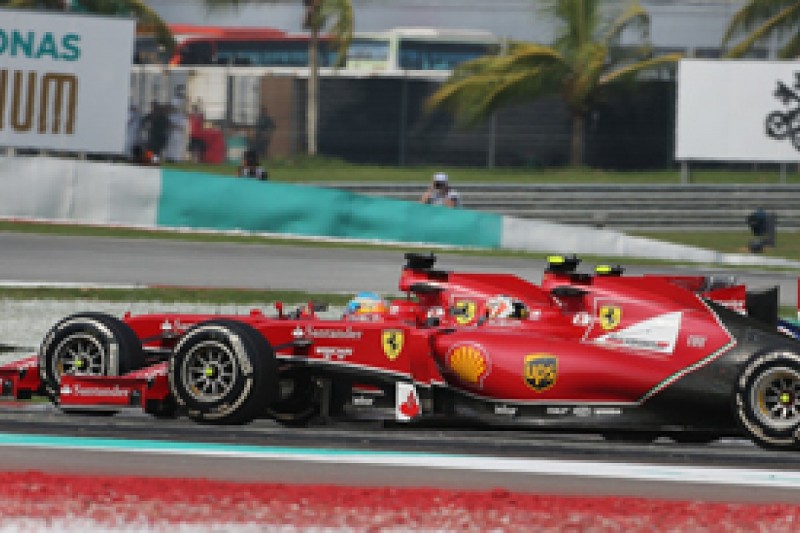 AUTOSPORT understands that revised suspension components will be tried out by Ferrari in Bahrain this weekend to help improve the front of the car further.

Despite the arrival of the new parts, Raikkonen is cautious about how quickly his problems will be fully solved, even though there were signs of progress in Malaysia.

"Overall we were much better but we were not where we wanted to be," he explained.

"There are a lot of things to improve in all areas, but we have all the right people and all the tools to fix those things.

"But those things are not easy to fix and I am sure it will take time. But we know where we want to be and where we are aiming, and we are going to get there.

"Hopefully we'll get some better results here now if we can start a similar way in the last race, but not having the issues we had in the race."